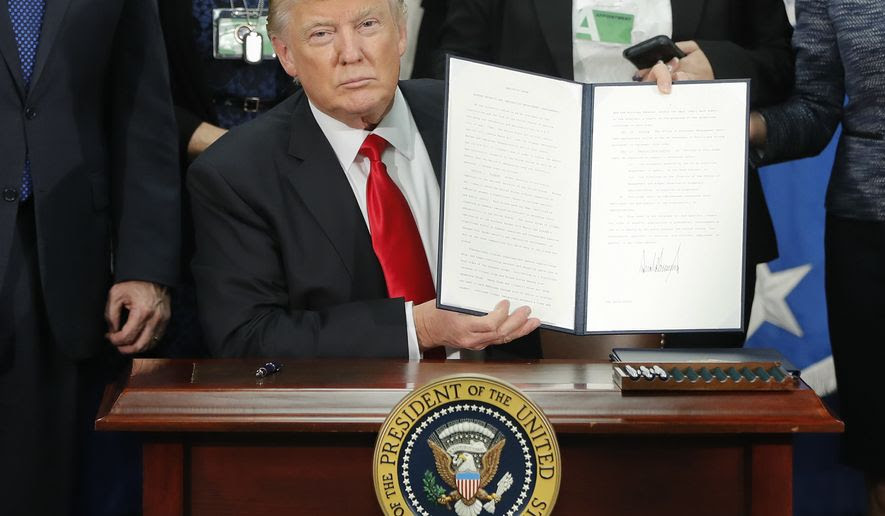 With a couple strokes of his pen, President Trump wiped out almost all of President Obama’s immigration policies Wednesday, laying the groundwork for his own border wall, unleashing immigration agents to enforce the law and punishing sanctuary cities who try to thwart his deportation surge.


Left untouched, for now, is the 2012 deportation amnesty for so-called Dreamers.
But most of the other policies, including Mr. Obama’s “priorities” protecting almost all illegal immigrants from deportation, are gone. In their place are a series of directives that would free agents to enforce stiff laws well beyond the border, that would encourage Mexico to try to control the flow of people coming through the southwestern border, and would push back on loopholes illegal immigrants have learned to exploit to gain a foothold in the U.S.
“Federal agencies are going to unapologetically enforce the law, no ifs, ands or buts,” White House press secretary Sean Spicer said.
Mr. Trump doesn’t break new legal ground, but instead pushes immigration agents to flex the tools Congress has already given them over the years to enforce existing laws.
Immigrant-rights advocates say those existing laws are broken and can’t be enforced. They’ve pushed for a complete overhaul and a redo that would grant most illegal immigrants already in the U.S. legal status.
In the meantime, the groups have asked the federal government to severely curtail — or in some cases to halt altogether — deportations.
On Wednesday, the groups vowed resistance to Mr. Trump’s policies, urging local officials to brave Mr. Trump’s threat to withdraw federal funding from sanctuary cities, and calling on immigrants themselves to rally.
“Those who are targeted by Trump and those that love us must protect ourselves and each other in these times,” said Tania Unzueta, policy director at Mijente, an advocacy group.
Mr. Trump signed two executive orders. One deals with the border, while the other encourages interior enforcement.
The orders would use existing federal laws to encourage foreign governments to take back their own illegal immigrants. Tens of thousands of criminals are released on U.S. streets because their home countries are refusing to take them. Cuba is the worst offender, with nearly 30,000.
Countries that refuse will see their visas stripped.
The Obama administration was reluctant to use that tool, pulling the trigger only once, in its waning days, with the Gambia.
On sanctuary cities, Mr. Trump said he would try to dry up federal money that flows to jurisdictions that refuse to cooperate with immigration agents. Hundreds of counties and cities have policies protecting illegal immigrants, to varying degrees, that their own authorities encounter.
Mr. Spicer said the executive order calls on new Homeland Security Secretary John F. Kelly to see what money can be cut off.
Overall, the orders try to create a tougher barrier — both physically and legally — for illegal immigrants trying to cross the southwest border.
Part of that is Mr. Trump’s wall, which the White House said the U.S. will foot the bill for — at least for now. But Mr. Spicer insisted that “yes, one way or another, has the president has said before, Mexico will pay for it.”
Beyond the wall, Mr. Trump’s orders seem designed to stop the loopholes that have emerged in recent years that allow illegal immigrants to come to the border, be caught, then released into the interior of the U.S.+
Source>http://www.washingtontimes.com/news/2017/jan/25/trump-eviscerates-obamas-immigration-policy/
Posted by theodore miraldi at 3:22 PM