Former Labor Secretary Tom Perez on Saturday was elected chairman of the Democratic National Committee, defeating top-rival Minnesota Rep. Keith Ellison, in their respective bids to chart the direction of the national party.
Perez was elected after two rounds of balloting in Atlanta at the party’s annual winter meeting. He received 235 votes, crossing the threshold of 218 ballots.
“We are at a turning point for our party and for all Americans,” Perez said after his victory. “By getting back to basics, we can turn the Democratic Party around, take the fight to (President) Donald Trump, and win elections from school board to the Senate.”
View image on Twitter 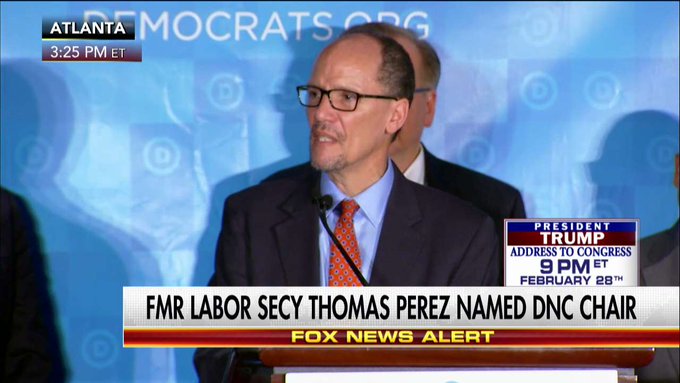 Fox News  ✔@FoxNews
.@TomPerez: I would like to appoint #KeithEllison Deputy Chair of #DNC.

Perez graduated from Harvard Law School in 1987 and worked as a civil rights attorney at the Justice Department.
He later served as deputy assistant attorney general for civil rights under Attorney General Janet Reno. Perez in 2002 joined the Montgomery County Council in Maryland as the panel’s first elected Latino and served through 2006.
After his win Saturday, Perez picked Ellison as his deputy chairman.
"We don't have the luxury to walk out of this room divided," Ellison said. "It is my honor to serve this party with Tom Perez."
Perez, now the first Latino to lead the DNC, and Ellison were among a field of seven election-day candidates that also included Pete Buttigieg, the mayor of South Bend, Indiana, whose late surge ultimately fell short.
The election involved 435 eligible members of the national party committee.
The race between Ellison and Perez was portrayed as an ideological proxy battle between Democratic supporters for Vermont Sen. Bernie Sanders and Hillary Clinton, who defeated Sanders in the party’s 2016 presidential primary. Ellison backed Sanders, while Perez backed Clinton.

Bernie Sanders  ✔@BernieSanders
I congratulate Tom Perez on his election as chairman of the Democratic National Committee and look forward to working with him.

Ellison, who in 2006 became the first Muslim elected to Congress, was considered a champion of the party’s most progressive wing.
Perez, a Labor secretary under President Obama, is considered more of an establishment candidate, though each ran on a progressive agenda and vowed to rebuild the party at the state and local levels, in large part by appealing to Democratic voters’ opposition to Trump, a Republican.

Reaction began pouring in shortly after the results were announced.

Obama released a statement that in part said:
"Congratulations to my friend Tom Perez on his election to lead the Democratic Party, and on his choice of Keith Ellison. ...What unites our party is a belief in opportunity -- the idea that however you started out, whatever you look like, or whomever you love, America is the place where you can make it if you try."
Trump’s victory in November was a gut punch to Democrats, considering Republicans had already controlled Congress and most of the state-houses, and Clinton had been the perceived frontrunner for essentially the entire election cycle.
But the DNC was already under duress by the time Trump won, the victim of an electronic hacking scandal in which emails showed then-Chairwoman Rep. Debbie Wasserman Schultz and her staff appearing to favor Clinton over Sanders, an independent who ran as a Democrat.
Wasserman Schultz, D-Fla., resigned from the DNC post in late summer, at the start of the Democrats’ national convention, as a result of the scandal.
Trump commented Saturday on the Perez win, in an apparent attempt to invade the news cycle.
"Congratulations to Thomas Perez, who has just been named Chairman of the DNC," Trump tweeted. "I could not be happier for him, or for the Republican Party!"
Ellison had support in the race from Sanders, Senate Minority Leader Chuck Schumer, of New York, and Rep. John Lewis, of Georgia, both Democrats.
Perez was backed by former Attorney General Eric Holder and former Vice President Biden. Obama had praised Perez without formally endorsing him.
Ellison used Thomas Jefferson’s copy of the Quran for his swearing-in. In 1989, he seemed in an academic paper to defend Louis Farrakhan, the controversial leader of the National of Islam.
Accusations of anti-Semitism have followed Ellison, based on his association with Farrakhan. He asserts that he was never an official member of the Nation of Islam but admits that he did spend 18 months organizing the Minnesota division of Farrakhan’s Million Man March in 1995.
It wasn’t until he ran for Congress in 2006 that Ellison wrote a letter to the Jewish community, apologizing for his involvement with others who held anti-Semitic views.
The Associated Press contributed to this report.
Source>http://www.foxnews.com/politics/2017/02/25/former-labor-sec-perez-elected-as-democratic-national-committee-chairman.html

Posted by theodore miraldi at 7:03 PM