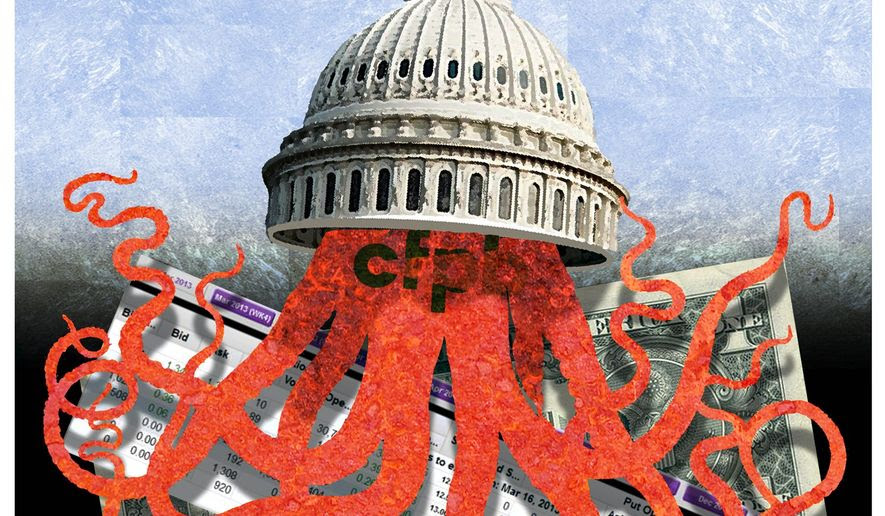 Illustration on the CFBP by Alexander Hunter

ANALYSIS/OPINION:
So long as President Donald Trump is in a firing mood, Richard Cordray, the director of the Consumer Financial Protection Bureau, must go.
One of the biggest swamp creatures, many thought Mr. Cordray wouldn’t survive 48 hours in the Trump administration, but alas, he has. He’s collected much power running his sprawling bureaucratic fiefdom, without any oversight from Congress, or even the president for that matter.
There’s the question whether Mr. Trump has the authority to even fire Mr. Cordray, a man who knows Republicans want him gone, but is refusing to leave.
Last year, the bureau’s single-director structure was declared unconstitutional in a court case, allowing Mr. Cordray to be fired at will, but the CFPB has appealed. So long as the case is pending, Mr. Cordray has grounds to stave off any dismal.
Which is why Mr. Trump should fire him for cause.


Although the idea of an agency designed to protect consumers sounds good in theory, its unaccountability to any elected official in government has bred corruption, legislative overreach and has led to internal mismanagement.
Let’s start with the agency’s crackdown on auto loans, where it did an end run around Congress, and used sloppy math as an excuse to overregulate. As part of the Dodd-Frank banking law, Congress explicitly exempted auto dealers from CFPB’s regulatory oversight — but that didn’t stop it from overreach.
The CFPB felt some car dealerships were charging higher interest rates to black buyers than they were to white customers, but because it’s illegal for loan applicants to disclose their race, the CFPB had to guess which customers were black or white by their last names and addresses in order to prove their theory.
The CFBP internally admitted this proxy process had an error rate of about 20 percent, but that didn’t stop it from using it to sue lenders for discrimination.
Then there’s the issue of professionalism.
The CFPB has a way of reinterpreting federal rules, without notifying businesses of the change — so these companies think they’re abiding by federal law, only to find out after they’ve been sued by the CFPB that the rules have changed.
That’s exactly what happened to a mortgage company which had relied on a practice laid out by the Department of Housing and Urban Development years ago. The CFPB reinterpreted the rule and then enforced its new interpretation against the mortgage company without letting the company know the law had changed.
Mr. Cordray’s bureau also likes to collude with like-minded consumer interest groups to write rulings, and then try to hide the reasoning behind them from the companies affected.
Internal emails disclosed by Politico, showed how the CFPB worked hand in hand with a consumer nonprofit as it drafted its onerous payday lending regulations, which are expected to put 70 percent of the industry out of business.
And in December, the Cause of Action Institute filed a lawsuit against the CFPB for refusing to disclose how it came up with a regulation on arbitration — which is required under the Freedom of Information Act.
Lastly, there’s the issue of rampant mismanagement within the agency itself, as exposed by Congressional hearings and employee surveys.
A naturalized U.S. citizen working at the CFPB was called an “f-ing foreigner” by management, and a department was internally dubbed “the Plantation” because of the number of blacks working in it, all supervised by white managers, without any obvious promotional track or a way to get transferred.
Managers within the CFPB intimidated and retaliated against employees for voicing complaints, or for offering any viewpoints other than its ultra-liberal dogma. Evidence of discriminatory pay practices in the agency’s own statistics have resulted in promises by management of emergency pay raises for minority workers to create parity.
An investigation by the Government Accountability Office last year found a quarter of minority respondents had been discriminated against, and 10 percent personally witnessed retaliation against another employee.
So yes, Mr. Cordray needs to go — he’s a swamp creature who sits on top of a mess of an agency.
Mr. Trump has promised to pick off these alligators one by one, and Mr. Cordray is a good place to start.
Source>http://www.washingtontimes.com/news/2017/feb/16/richard-cordray-should-be-fired-by-trump/
Posted by theodore miraldi at 7:59 AM