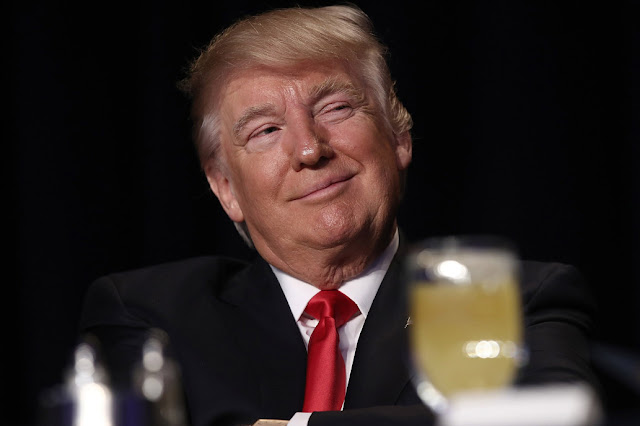 
In advance of President Trump’s first State of the Union speech, random busybodies are urging him to tone it down. One adviser from the bleachers suggests he be “humble and inclusive.”
Sweet, but I’m betting humble pie is not on the president’s menu. On the contrary, Tuesday night in the Capitol is likely to be a shock-and-awe blowout of pure Trumpism.
The idea that Trump must go mild has been a staple of the punditocracy since he announced his candidacy. That it still holds such a prominent place in his second month in the Oval Office reveals what slow learners media liberals are.
Although completely wrong about the mind-set of voters from start to finish, they remain steadfast in their certainty that Trump needs a personality transplant to satisfy the public. At least that’s what they say.
What they mean is that they won’t accept him as legitimate until he plays by their rules. They see themselves as Washington’s gatekeepers, entitled to deference from newcomers, with the added requirement that Republican presidents approach on bended knee. They use the hysterical reaction of their fellow Democrats as a bludgeon to demand that Trump conform to the progressive catechism. Milk and cookies to the distressed are recommended.
Of course, Trump must also compromise his policies and talk in the politically correct ways that signal sensitivity. You know, decry income inequality or, even better, apologize for winning the election.
If nothing else, he must stop saying America First, America First. Nationalism embarrasses the media and hurts the feelings of their non-American friends.
They doth protest in vain.
For now at least, the Trump train moves in only one direction — forward, a fact illustrated every day, including Friday. In his rousing speech to the CPAC convention, the president made an important clarification by emphasizing that he meant only “fake news” outlets when he declared that the media “is the enemy of the people.”
My first impression was that Trump was taking a step back, an idea reinforced when he singled out anonymous sources as a problem and called on news organizations to stop using them — a position shared by many journalism professionals.
The president then extended an olive branch, saying, “There are some great reporters around, they are talented and honest as the day is long; that is great.”
He also said, “I’m not against the media. I’m not against the press . . . I am only against the fake news media or press.”
Alas, any illusion that this was the start of a beautiful new relationship was soon shattered when Trump’s press secretary barred some outlets from his office while admitting others for a briefing. Those barred included The New York Times and CNN, which have been unfairly harsh on Trump, and he has returned the favor by accusing them of being “dishonest” purveyors of “fake news.”
In short, they were the ones he was talking about as being an “enemy of the people,” and the banishment, while merely symbolic since “pool” reporters were there, sent the message that he is not backing down from the fight.
Most Americans likely will see the incident as overkill, and there are better ways of making a point about media bias while actually doing something about it. Rather than excluding outlets, throw open the doors wider to more voices and use technology to democratize public access. That is also more consistent with Trump’s promise to shift power from Washington to the people.
That said, the banishment illustrates why Tuesday night is not going to be a Kumbaya moment. The president’s first speech to Congress will draw a huge TV audience, and the chances are next to nil that he will use the occasion to pretend to be somebody he is not.
To be clear, he is capable of change when it’s necessary. During the campaign, Trump had the discipline to stick to the issues after he dug himself into rabbit holes and started to use a teleprompter to avoid mistakes.
But as president, it’s far too early to declare peace. He’s at war with the status quo and caving in to dead-ender opponents after five weeks would mark him as weak with his core supporters. He wants to expand his power, not reduce it, as he begins the dance with Congress over ObamaCare, tax reform and the budget.
Besides, we should not underestimate Trump’s determination or his strategy for success. Business taught him and politics reinforced that lowering your sights too soon is a losing proposition. Timing is key to the art of the deal.
He will compromise if he must at the end. Now he will go full speed ahead, guns blazing.
So bring the popcorn and buckle up. Tuesday could be wild.
Source>http://nypost.com/2017/02/26/trumps-state-of-the-union-speech-is-going-to-be-wild/
Posted by theodore miraldi at 10:16 AM