Who Knew There Were SO MANY Homophobic, Racist Xenophobes at Berkeley 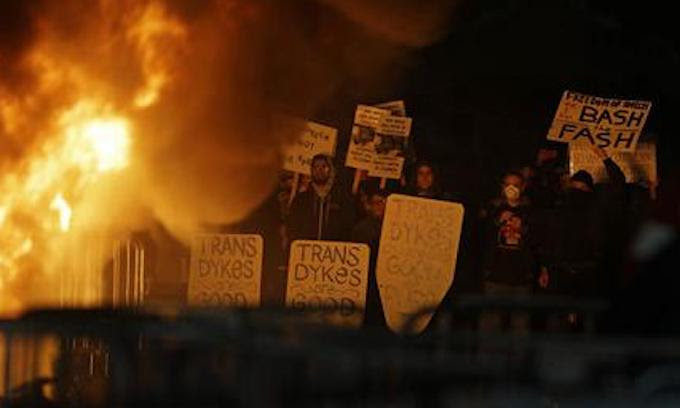 
The birthplace of the free speech movement has become its graveyard.
Hundreds of liberals rioted at the University of California Berkeley Wednesday night -- burning stores, throwing Molotov cocktails and clashing with police.
The rampaging mob forced the university to shut down an event featuring gay conservative firebrand and Breitbart editor Milo Yiannopoulos.
“I’m outraged that Milo has been given a platform at UC Berkeley, and there should be no place for him here,” visiting assistant art professor Samara Haplerin told the Daily Californian. “He should be scared that people aren’t going to stand for this.”
Ironically, Milo had planned to deliver remarks defending free speech.
“One thing we do know for sure: the Left is absolutely terrified of free speech and will do literally anything to shut it down,” he wrote on Facebook.
Learn how Conservatives can fight back and reclaim our public universities!
The British conservative journalist called the violence a “horrible spectacle and very humiliating for American higher education.”
The crowd hurled fireworks at police officers and smashed windows at the Martin Luther King, Jr. Student Union. They also damaged buildings in downtown Berkeley – including a Starbucks and a number of banks.
The bloodthirsty mob targeted several supporters of President Trump. One young lady wearing a “Make America Great Again” hat was attacked during a television interview. An unknown man sprayed some sort of liquid in her face.
The Daily Californian reports another Trump supporter was grabbed by a crowd of agitators and thrown to the ground. He escaped, but they grabbed his red hat and set it on fire. And police had to rescue another man who was bloodied and beaten.
The university released a statement blaming the violence on outsiders who they allege came to the campus to cause mayhem.
They also affirmed Milo’s right to speak on the liberal campus.
“Chancellor Nicholas Dirks made it clear that while Yiannopoulos’ views, tactics and rhetoric are profoundly contrary to those of the campus, UC Berkeley is bound by the Constitution, the law and the university’s values and Principles of Community, which include the enabling of free expression across the full spectrum of opinion and perspective.”
Those are very nice words – but they are meaningless – unless they are enforced. According to the university, not a single person was arrested. Not a single arrest, folks.
Did someone order the police officers to stand down? If so, who gave that order – and why?
So here's what needs to happen: President Trump should immediately issue an executive order blocking Berkeley students from receiving any federal funding. And the same goes for any other public universities that want to silence conservative voices.
Universities must guarantee free speech for all students – conservative and liberal. It’s time for the federal government to eradicate this un-American infestation in higher education.
So shut down Berkeley, Mr. President. Shut it down.
“No one’s safety is at risk from different opinions,” Milo told “Tucker Carlson Tonight.” “No one’s physical safety is endangered by political ideas from a speaker on campus, but universities have sort of allowed this stuff to happen, and even in some cases encouraged it.”
Ironically, it was liberals who silenced a gay immigrant and vandalized a building named after a Civil Rights legend. Who knew there were so many homophobic, racist xenophobes at Berkeley?
Source>http://www.foxnews.com/opinion/2017/02/02/who-knew-there-were-so-many-homophobic-racist-xenophobes-at-berkeley.html
Posted by theodore miraldi at 4:15 PM