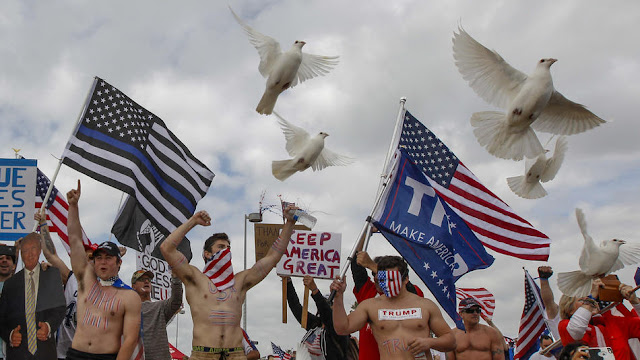 Cindy Carcamo, Adam Elmahrek and Ben Brazil
Violence erupted at a Make America Great Again rally in Huntington Beach on Saturday after a protester opposed to President Trump allegedly doused a female organizer of the event with pepper spray, sparking a brawl that ended with several arrests.
A group of flag-waving Trump supporters tackled the man with the pepper spray, who was wearing a black mask, and started punching and kicking him, according to witnesses. Several other fights also broke out between demonstrators.
The crowd chased the masked man, who jumped over a fence and started running along Pacific Coast Highway, where he was detained by California Highway Patrol officers.
A handful of counter-protesters fled the scene.
Travis Guenther, whose wife was also pepper-sprayed, said he was among those who chased the masked man and struck him with a flag that said, "Trump, Make America Great Again."
"I hit him five times with the flag over his head," said Guenther, who yelled at the man as he was detained by law enforcement officials.
"How is your head?" he asked the man.
"We’re not xenophobic," Guenther said. "We're not racist. We're just proud Americans."
Jennifer Sterling of Huntington Beach, the organizer who was hit with pepper spray, seemed unfazed by the incident, which involved a small number of protesters.
"It was a quick reaction," she said. "There was about 12 of them."
Sterling said the rally was not simply for Trump but also a patriotic rally, celebrating first responders, military veterans, the vice president and the president. The noontime rally and march at Bolsa Chica State Beach was one of about 40 affiliated events scheduled nationwide.
The dozen or so counter-demonstrators — including one who wore a patch that said, “Only You Can Resist Racists Liars” — were overwhelmed by several hundred Trump supporters. They all refused to identify themselves, but one told a reporter that the group only used pepper spray after they were shoved and punched by their rivals.
But Steele Vaz, 17, of Huntington Beach said he saw masked people spray and punch Sterling and got in the middle to try and break it up.
"I was here to support [Trump] but I didn't know it was going to be violent," said Steele, who was there with his family. "They sprayed her. They were punching her."
His mother Arlet Vaz said she was proud of her son' actions.
"He did the right thing," she said. "He'll defend anybody."
Vaz said this won't stop the family from attending more pro-Trump rallies.
"There is even more reason to go," she said.
Capt. Kevin Pearsall of California State Parks said six people were originally detained but only four were arrested. He said three men were arrested on suspicion of illegal use of a Taser, and one woman was arrested on suspicion of assault and battery. None of their names were immediately released.
Pearsall said all of those arrested were counter-demonstrators.
A separate pro-Trump rally was held Saturday in Hollywood without incident. About 100 people attended the more festive affair, which included music and dancing.
They blamed the media and an evil "globalist" agenda pushed by liberal elites for casting them as bigots.
Elsa Aldeguer, a Latina who said she was head of the Latino Coalition of Los Angeles, had her 9-year-old son speak to the crowd.
The child railed against the mainstream media.
"The media only says bad things about Trump. They don't say the good things about Trump," the boy said to an eruption of cheers.
Others said they were proud of their peaceful event and pointed to the group's diversity as proof that they are not racists.
"We're not here to fight," said Daniel, a Cal State Northridge student from Arcadia who declined to give his last name. “We’re here to stand up for our beliefs.”
Source>http://www.latimes.com/local/lanow/la-me-trump-rally-20170325-story.html#
Posted by theodore miraldi at 9:17 AM