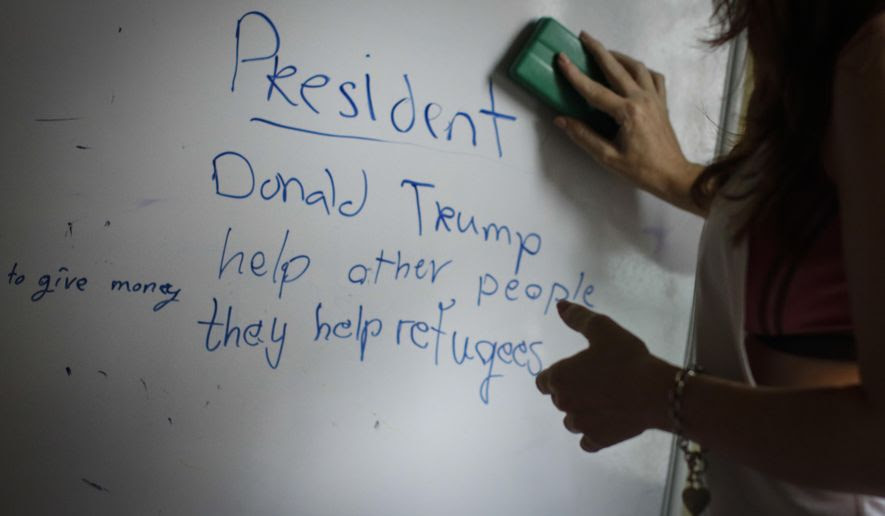 The Virginia neighborhood of Fairfax County ranks with parts of those other cities as having the highest percentage of children from immigrants in its public schools, with 78 percent of students coming from immigrant households, according to a report that the Center for Immigration Studies is releasing Thursday.

Across the country, some 23 percent of students in public schools come from immigrant households. That has more than doubled in the past 25 years, from just 11 percent in 1990. But their numbers are heavily concentrated in big cities.
Miami-Dade County in Florida has four areas where at least 80 percent of students are from immigrant-led homes. In one of those, a part of Hialeah City, a staggering 93 percent of students belong to immigrant households.
Los Angeles County has 13 regions where students from immigrant homes make up at least 75 percent of the school populations.
“Immigration really has dramatically increased the number of children in public schools,” said Steven A. Camarota, research director at the center, which advocates for stricter immigration limits. “The biggest issue for me is: Can the level of immigration be so high that it overwhelms the assimilation process?”
That has long been a question in the immigration debate, particularly in the Annandale region, which also includes Bailey’s Crossroads and Culmore.
President Clinton, launching his race initiative in 1997, highlighted the surrounding Fairfax County as a model for integration. He sent his race commission to Bailey’s Elementary School, in the heart of Culmore, to study diversity and integration.
At the time Mr. Clinton highlighted the region, Fairfax’s public school system was 64 percent white, 14 percent Asian, 11 percent black and 10 percent Hispanic. Twenty years later, whites are 40 percent of the student population, while Hispanics have more than doubled to 24 percent, Asians have risen to 19 percent and blacks have held nearly steady at 10 percent. Five percent identify as multiracial.
Over the past two decades, costs of the diversity have emerged.
Culmore and surrounding areas have long been a breeding ground for ethnic gangs, with MS-13 in particular using it as a foothold in the region.
Although not a one-to-one correlation, immigrant population serves as an indicator of some costly special circumstances, such as a higher percentage of students who are struggling to learn English.
In the Annandale region, 72 percent of students speak a foreign language at home, according to the report. Most of those are speaking Spanish, but a large number speak Vietnamese and nearly 10 percent speak Kru, a West African language. All told, 21 languages are spoken at immigrant homes in Annandale.
One Loudoun County, Virginia, region reported 23 languages spoken at homes, with Spanish, Vietnamese and Telegu topping the list.
The biggest polyglot nationally was part of Alameda County, California, which had 27 languages spoken at homes. Spanish, Korean and Chinese were the most common.
Mr. Camarota’s study suggests it’s not just immigrants who are speaking other languages at home. In parts of Texas, only half of the students are from immigrant-led homes, but as much as 90 percent of the households speak languages other than English at home.
The challenge for schools, Mr. Camarota said, is that even as the number of children of immigrants rises, the tax bases don’t grow as quickly because immigrant families tend to have lower incomes than native-born families.
He said that raises a number of policy questions, including whether the government should do a better job picking immigrants, should impose stricter limits on the number arriving or offer more assistance to school systems grappling with the challenge of assimilation.
“I’m not arguing we somehow not educate these kids. They make up almost a quarter of the kids in America. How these kids do is extremely important for the future of the country,” he said. “The question is: Does it make sense to keep adding to this population and creating new strains and challenges for schools? The debate over immigration — nobody even talks about that.”
Analysts say the surge of immigrants is a result of changes in U.S. policies dating back decades, which put a higher priority on family ties, created a random lottery to admit tens of thousands of people a year and largely turned the other eye on illegal immigration.
President Trump has suggested shifting the system to place a bigger priority on merit-based immigration, which could attract better-educated and wealthier immigrants.
Immigrant rights groups have bristled at that suggestion, saying a strength of the U.S. system is the ability to bring extended families.
After Mr. Trump mentioned his merit-based plans in his address to Congress last month, Greg Chen, advocacy director at the American Immigration Lawyers Association, said it was “merely code to exclude those who seek to join family members in the United States.”
“There is a wealth of research proving that immigrants improve the economy through purchasing power and their participation in the labor force. Immigration is good for our economy and our nation,” he said.
Mr. Camarota’s data did not distinguish between families whose parents are in the U.S. legally versus those in the country without authorization. Under Supreme Court precedent, children are guaranteed a public education no matter what their status.
Most of the children in the study were born in the U.S. and are citizens, though their parents may be immigrants.
Mr. Camarota used the Census Bureau’s Public Use Microdata Areas, or PUMAs, for his analysis. Those comprise about six to 10 high schools per region. In some densely populated cities, a PUMA is about the size of a neighborhood, and there can be many PUMAs in a single city. In less-populated Western regions, a PUMA can cover an entire corner of a state.
Source>http://www.washingtontimes.com/news/2017/mar/15/immigrants-children-numbers-growing-us-public-scho/
Posted by theodore miraldi at 1:38 PM