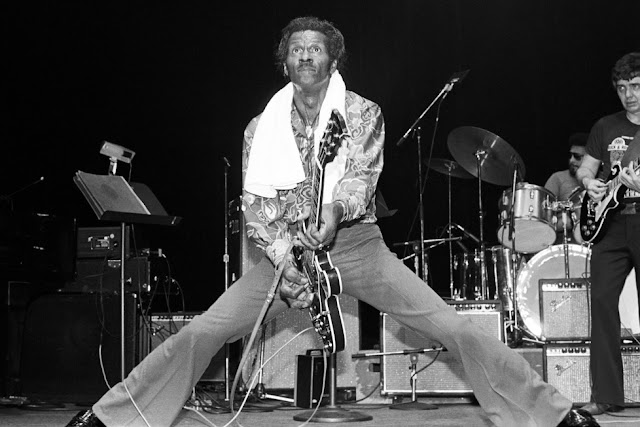 ‘Those who knew him well told me about what a wonderful family man he was. He was a walking contradiction, that’s for sure.’
- Bruce Pegg on Chuck Berry

Years later, Berry admitted the tax case “was no bum rap” — but claimed that the government had inflated its losses.
“It was straight, true. It was a bum rap in the sense that . . . it was about 15 percent that they added, but that’s nothing to kick about,” he told Goldmine magazine. “In other words, they were about 85 percent right and 15 percent wrong.”
Berry long cultivated a reputation as a cheapskate, in large part because he used local “pick-up” bands while on tour instead of hiring regular performers, often resulting in sloppy performances with the musicians he met just moments before hitting the stage.
In 1987 — a year after his induction into the Rock & Roll Hall of Fame — he even admitted that he became a rock ‘n’ roller for the money, and that “the Big Band era is my era.”
“Rock ‘n’ roll accepted me and paid me, even though I loved the big bands,” he told the Los Angeles Times.
“I went that way because I wanted a home of my own,” he said. “I had a family. I had to raise them. Don’t leave out the economics. No way.”
Later that year, Berry was accused of punching a woman in the mouth during an early morning dispute at the Gramercy Park Hotel.
Friends described victim Marilyn O’Brien Boteler as a 30-something rock singer who dated Berry — whom she slapped with a $5 million suit that claimed she needed five stitches as result of the smack.
Berry was also charged with assault but failed to appear in court in June 1988, leading to a bench warrant for his arrest.
He later plea-bargained to a lesser charge of harassment and was sentenced to a $250 fine.
Author Bruce Pegg, who wrote a 2002 biography titled “Brown Eyed Handsome Man: The Life and Times of Chuck Berry,” described the musician as a complicated man.
While Pegg said he believed the Mann Act conviction “was racist in nature” and the videotape scandal “began with a personal grudge,” he also said Berry was no saint and someone who “kept on giving everyone a 2-by-4 big enough to hit him with.
“Yet at the same time, those who knew him well told me about what a wonderful family man he was,” Pegg added.
“He was a walking contradiction, that’s for sure.”
Source>http://nypost.com/2017/03/21/the-dark-past-of-chuck-berrys-scandal-filled-sex-life/
Posted by theodore miraldi at 5:48 PM