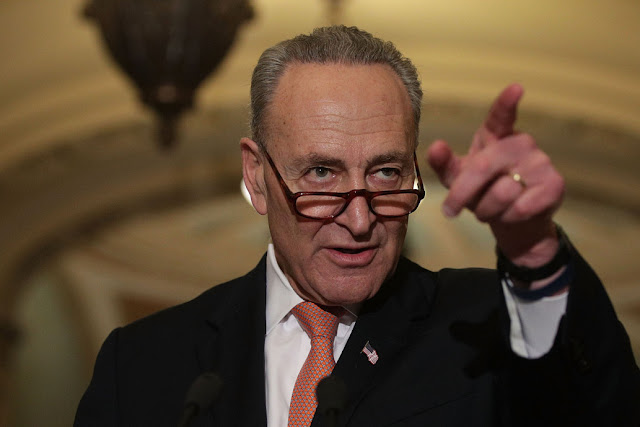 
It’s right out of Charles Dickens’ “A Christmas Carol”: The ghost of Chuck Schumer past issuing a dire warning to today’s Senate minority leader.
Back in 2013, recall, a GOP effort to defund ObamaCare in a federal spending bill led to a 16-day shutdown of the federal government. Democrats were irate (as they always are when Republicans advance their policies), and none more so than Schumer, who explained how his party was above the fray.
“You know,” he said on ABC’s “This Week,” “we could do the same thing on immigration reform. We believe strongly in immigration reform. We could say, ‘We’re shutting down the government, we’re not gonna raise the debt ceiling, until you pass immigration reform.’ ”
But, he added ominously, “it would be government chaos.”
Well, guess what: It’s 2017, and Chuck Schumer is now threatening to shut down the federal government over, among other issues, immigration reform.
New York’s senior senator doesn’t like the fact that Republicans mean to insert provisions for border-wall funding and deportation of illegal immigrants in a must-pass bill to keep the government funded past April 28. So he’s threatening a filibuster to block passage — which would result in furloughing government employees, just like last time.
Back then, Democrats called it “hostage-taking.” Now they’re blaming Republicans for leaving Democrats no option but to take hostages themselves. Or, as Schumer put it: “They will be shutting down the government and delivering a severe blow to our economy.” Meaning: When they do it, it’s reckless; when we do it, it’s principle.
Schumer was right the first time. So was Sen. Chris Coons (D-Del.), who said, “Hostage-taking is not governing.” Time for Schumer & Co. to go to the videotape.
Source>http://nypost.com/2017/03/19/chuck-schumer-calls-for-chaos/
Posted by theodore miraldi at 8:40 AM