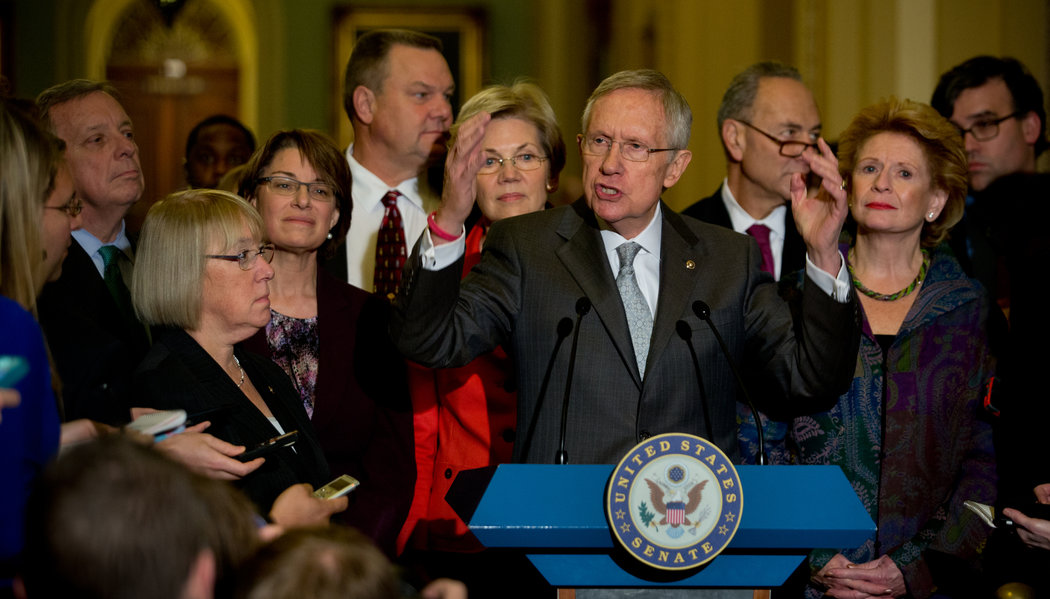 The Democratic Party has a leadership vacuum at the top, with many registered voters eager to see someone who is not currently on the scene become the party’s standard-bearer in 2020, according to a new Harvard-Harris Poll survey provided exclusively to The Hill.
When registered voters were asked whom they view as the leader of the Democratic Party, 40 percent said it has no leader.
Fifteen percent named former President Obama as the party’s leader. Twelve percent said Sen. Bernie Sanders (I-Vt.), who has gone out of his way not to join the Democratic Party despite running for the its presidential nomination last year.
Eleven percent view Sen. Elizabeth Warren (D-Mass.) as the party’s leader, and 10 percent answered with former Secretary of State Hillary Clinton, the 2016 Democratic presidential nominee.
On the question of who should be a Democratic presidential candidate in 2020, Sanders led the field, at 14 percent, followed by former first lady Michelle Obama at 11 percent, Warren at 9 percent, Clinton at 8 percent, Dallas Mavericks owner Mark Cuban and New York Gov. Andrew Cuomo each at 4 percent, and television personality Oprah Winfrey and Sen. Cory Booker (N.J.) each at 3 percent.
Forty-five percent said they want to see someone not on the list of possible candidates in the survey.

“There is a vacuum now in the Democratic Party in terms of leadership and a 2020 candidate, so it’s the Democrats who might have a raft of candidates next time, especially if the voters are searching for someone new,” said Harvard-Harris co-director Mark Penn.
When Clinton was taken out of the list of potential 2020 candidates, Sanders’s support went up to 18 percent, followed by Michelle Obama at 14 percent and Warren at 10 percent. No other candidate received more than 4 percent support, and 44 percent of respondents said they want someone not on the list.
“Michelle Obama has some potential as a future candidate if she was interested in politics,” Penn said.
Barack Obama has said his wife “will never run for office,” though she remains hugely popular among Democrats.
The party is in the midst of a full-scale rebuilding project after the 2016 elections, in which it lost control of the White House and failed to win majorities in either the House or Senate.
Democratic ranks have also faced serious defeats at the state level, where the party has lost about 1,000 legislative seats since Obama took office. Republicans control 69 of 99 legislative chambers across the country and 33 of 50 governor mansions.
Democrats took the first step in setting a new path forward last month when former Obama administration Labor Secretary Tom Perez defeated Rep. Keith Ellison (D-Minn.), a Sanders acolyte, to become chairman of the Democratic National Committee.
Still, the party lacks a consensus leader at a time when there are deep and lingering divisions between grassroots liberals and mainstream establishment Democrats.
The partisan breakdown of the Harvard-Harris survey is 37 percent Democratic, 30 percent Republican, 28 percent independent and 5 percent other.
When only Democrats are taken into account, the figures shift slightly.
Thirty-five percent of Democrats said their party has no leader. Sixteen percent picked Barack Obama or Warren as the leader, followed by Sanders at 14 percent and Clinton at 8 percent.
Twenty-five percent of Democrats said they want someone not on the poll’s list of possibilities to be their presidential candidate in 2020. Twenty percent said Sanders should be the nominee, followed by Michelle Obama at 17 percent, Warren at 15 percent, Clinton at 10 percent, Cuomo and Booker each at 4 percent, Winfrey at 3 percent and Cuban at 2 percent.
Overall, 40 percent of respondents had a favorable view of the Democratic Party, compared with 60 percent who viewed it negatively. Republicans were seen similarly, 41 percent favorable to 59 percent unfavorable.
But Republicans had a far more positive view of their own party, with 79 percent saying they had a favorable view of the GOP. Only 65 percent of Democrats had a favorable view of their own party.
Among all the registered voters surveyed, 46 percent said the Democratic Party is becoming more liberal, 43 percent said it is staying the same, and 11 percent said it is moving to the right. A majority of Democrats, 56 percent, said the party is staying the same, while 30 percent said it is becoming more liberal and 14 said it is becoming more conservative.
Forty-nine percent of all those surveyed said the GOP is becoming more conservative, while 36 percent said it is staying the same and 16 percent said it is becoming more liberal. Among just Republicans, 43 percent said their party is staying the same, 39 percent said it is becoming more conservative, and 19 said it is becoming more liberal.
The Harvard-Harris survey of 2,092 registered voters was conducted online between March 14 and 16.
Source>http://thehill.com/business-a-lobbying/324903-for-democrats-no-clear-leader
Posted by theodore miraldi at 8:01 AM