Sometimes, warning people is more effective than wooing them 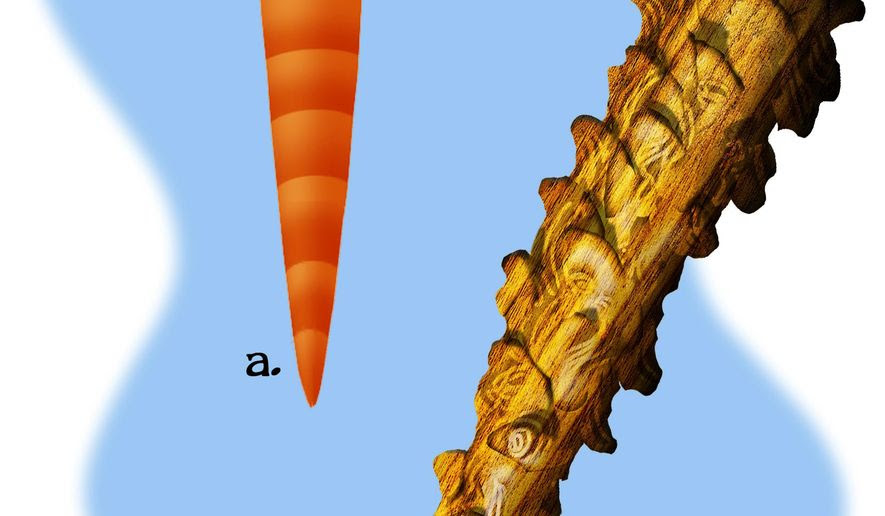 Illustration on deterrence by Alexander Hunter

Deterrence is the strategy of persuading someone in advance not to do something, often by raising the likelihood of punishment.
But in the 21st century, we apparently think deterrence is Neanderthal and appeals to the worst aspects of our natures. The alternative view insists that innately nice people respond better to discussion and outreach.
History is largely the story of the tensions between, and the combination of, these two very different views of human nature — one tragic and one therapeutic.
The recent presidential election results favor a more pessimistic view of humans: that without enforceable rules, humans are likely to run amok — quite in contrast to the prior therapeutic mindset of the Obama administration.
Take illegal immigration. The Trump administration believed the answer was to persuade people not to come illegally into the United States, and to convince those who are already residing here illegally and who have broken American laws to go home. So his proposed wall on the border with Mexico and beefed-up patrols are a sort of insurance policy in case immigrants do not heed appeals to follow the law. Deportation and even the threat of deportation also serve as deterrents to persuade others not to enter the U.S. illegally, given the likelihood of being sent back home promptly.
The early result of that proposed deterrent policy is that in just two months, attempted illegal entries into the U.S. have fallen dramatically.
Past approaches to illegal immigration were largely therapeutic. Bilateral talks with Mexico, sanctuary cities, de facto amnesties and nonenforcement of immigration laws supposedly would ensure that immigration was orderly and a positive experience for both hosts and guests. Instead, the border effectively became wide open and chaos ensued.
Currently, there are no real repercussions on campus for students who disrupt public discourse or prevent invited speakers from presenting lectures. Universities in theory claim this is a bad thing — a violation of the constitutional rights of free expression and assembly. But campuses rarely punish students for violating the rules. They seldom ask local law enforcement to apply the full force of local and state laws to (often violent) student lawbreakers.
If the intent of universities was to persuade students to respect free speech, then their therapeutic policies seem an utter failure. University laxity is seen by protesters as weakness to be held in contempt rather than magnanimity to be appreciated.
The tragic view would hold that had the University of California expelled students for recently disrupting free speech — and had it encouraged law enforcement to arrest miscreants for destroying property and using violence against others — such deterrence would have prevented such unrest in the future.
Such a precedent at Berkeley might have dissuaded Middlebury College students from trying to shout down and even injure the political and social scientist Charles Murray when he was invited to deliver a lecture. The students who charged Mr. Murray, apparently intending to physically force him off campus, might not have been so bold had they known in advance that they would be brought up on charges for any such violence.
Middlebury is an elite school where mostly rich kids fear that a criminal record would be fatal to the sort of high-power resumes they hope to compile for the good life to follow graduation.
The same tragic/therapeutic tension characterizes approaches to radical Islamic terrorism. Does vetting incoming refugees from the Middle East deter potential terrorists from entering the country, or does such scrutiny turn off people, radicalize them and encourage terrorism?
Did the Obama administration’s euphemistic effort to eradicate the phrase “radical Islamic terrorism” — along with President Obama’s apology tour and therapeutic Cairo speech — win hearts and minds in the Middle East? Or did such outreach convince radicals that the United States was hardly to be feared, thus encouraging anti-American sentiment?
In the past eight years, the U.S. has backed off the red lines and deadlines it issued to Syria, Russia and Iran. Did such equivocation earn America appreciation and respect for circumspection — or contempt for empty rhetoric?
There is no clear-cut divide between deterrence and therapy. Each at times has its place in warning or wooing people and nations. But in general, anytime a government errs on the side of therapy and communicates to individuals and foreign powers that laws are flexible, that punishment is iffy and that consequences are negotiable, it gets less of what it wants.
It is unfortunate but true that North Korea is deterred more by U.S. military strength than by United Nations resolutions.
In much the same way, radical campus lawbreakers probably respect (and fear) the local district attorney a lot more than the college president.
In other words, the more we feel we have entered a 21st-century therapeutic utopia, the more tragic that human nature seems not to have changed all that much from the Stone Age.
Source>http://www.washingtontimes.com/news/2017/mar/15/trump-telling-immigrants-not-to-come-to-us-reduced/
Posted by theodore miraldi at 7:46 AM