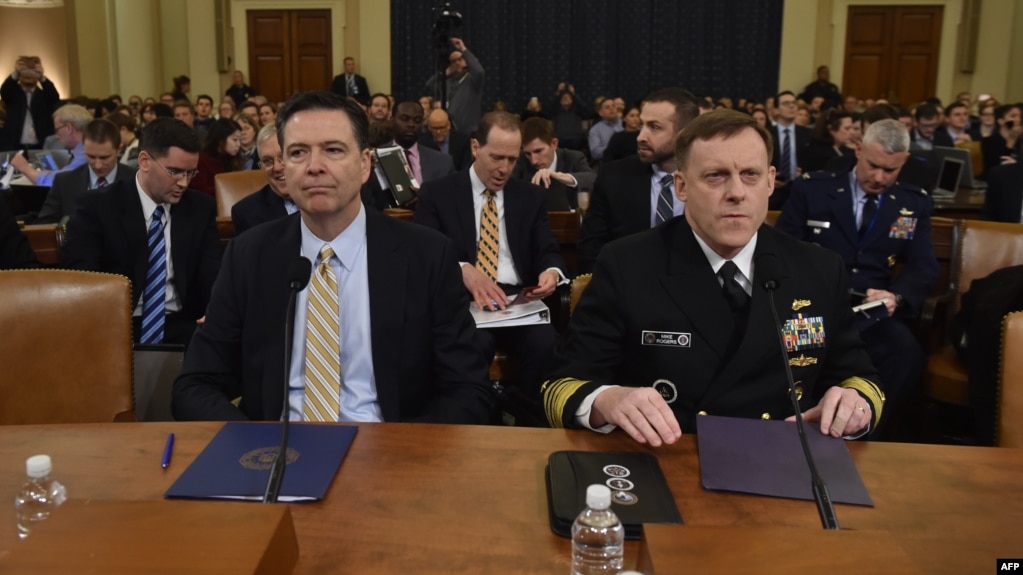 
The FBI is probing whether Donald Trump or his advisers coordinated with Russia ahead of the November election, Director James B. Comey said Monday, but his agents have found no evidence to back up the president’s repeated accusations that the Obama administration was snooping on him.
Mr. Comey acknowledged that revealing the existence of his investigation was unusual, but he said the circumstances warranted it. Republicans said that created all sorts of problems and urged the FBI to quickly finish its investigation and clear away the cloud it has left over the White House.
Republican lawmakers also demanded that the FBI, the National Security Agency and the rest of the government’s spy establishment investigate the press leaks that have plagued the Trump administration in recent weeks, purporting to detail sordid communications between Trump officials and Russians.
Mr. Comey said the pace of leaks does appear to have picked up in the past two months, which coincides with Mr. Trump’s inauguration and the beginning of public claims by his political opponents inside the government.
Mr. Comey’s public confirmation of the long-suspected investigation and his shooting-down of Mr. Trump’s rash speculation about wiretapping of his campaign and Trump Tower amounted to a double-whammy for the White House.
Mr. Comey and National Security Agency Director Adm. Michael Rogers said Russia tried to influence the outcome of the U.S. presidential election, motivated chiefly by antipathy toward Democratic candidate Hillary Clinton, which led them to attempt to aid Mr. Trump.
Though they tried to hack registration databases, Russian operatives did not alter the vote tallies, the two top officials said.
The White House considered that a victory of sorts.
“The NSA and FBI tell Congress that Russia did not influence electoral process,” the president said in a tweet from the official @POTUS account.
Democrats, though, said the fact that the FBI is investigating the Trump team is bad enough and that the flat repudiation of Mr. Trump’s claims of wiretapping dents the president’s credibility.
“President Trump owes the American people and President Obama more than just an explanation, but an apology,” said Senate Minority Leader Charles E. Schumer, New York Democrat. “He should admit he was wrong, stop the outlandish tweets and get to work on behalf of this country.”
Testifying to the House Permanent Select Committee on Intelligence in a rare open session, Mr. Comey said his probe began in late July. He declined to get into specifics because revealing anything more could taint the investigation.
But both Mr. Comey and Adm. Rogers flatly ruled out Mr. Trump’s claims in a series of Twitter posts this month that President Obama wiretapped Trump Tower or snooped on the campaign.
“I have no information that supports those tweets, and we have looked carefully inside the FBI,” Mr. Comey said. “The Department of Justice has asked me to share with you that the answer is the same for the Department of Justice and all its components. The department has no information that supports those tweets.”
Adm. Rogers went further by saying that the NSA did not engage in any snooping and was not asked to. The admiral also shot down Trump officials’ speculation that the previous administration asked British intelligence to do the snooping, perhaps to circumvent American privacy laws.
“I’ve seen nothing on the NSA side that we engaged in any such activity, nor that anyone ever asked us to engage in such activity,” he said.
After Mr. Comey’s refutation, Mr. Trump’s spokesman said the White House still expects to be vindicated.
“We are at the beginning phases of this, and we have a ways to go,” said White House spokesman Sean Spicer.
He urged reporters to focus on the leaks of classified information, including the existence and contents of a transcript of a conversation between retired Lt. Gen. Michael Flynn and the Russian ambassador during the presidential transition.
That conversation was apparently scooped up in U.S. snooping but should have been kept a tight secret. Attaching Mr. Flynn’s name to the conversation — what is known in the intelligence community as “unmasking” — and then revealing that name publicly could be a violation of law.
Rep. Trey Gowdy, South Carolina Republican, tried to lead that chain back to the Obama administration, demanding to know whether top figures in the Obama White House or legal and intelligence agencies had access.
Under questioning from Mr. Gowdy, Mr. Comey said former National Security Adviser Susan E. Rice, former Director of National Intelligence James R. Clapper, former Attorney General Loretta E. Lynch and former acting Attorney General Sally Q. Yates had access to some unmasked names, though he stopped short of saying whether they had access to Mr. Flynn’s communication.
Much of the back-and-forth at the hearing focused on two Trump figures: Roger Stone, an informal Trump adviser who bragged during the campaign that he had been in touch with the Guccifer 2.0 hacker, and Paul Manafort, who at one time was manager of Mr. Trump’s campaign.
Mr. Comey declined to say much about those two figures because he didn’t want to taint the investigation.
Mr. Comey and Adm. Rogers said there was no evidence that Russian operatives hacked the election, switched votes or stole support from Mrs. Clinton.
Adm. Rogers did, though, reaffirm a report issued under the Obama administration that said Russian operatives were behind breaches of the Democratic National Committee and Clinton campaign officials’ accounts, leading to the leak of embarrassing emails that dented Mrs. Clinton’s campaign.
Source>http://www.washingtontimes.com/news/2017/mar/20/fbi-confirms-probe-trump-campaign-ties-russia/
Posted by theodore miraldi at 8:41 AM