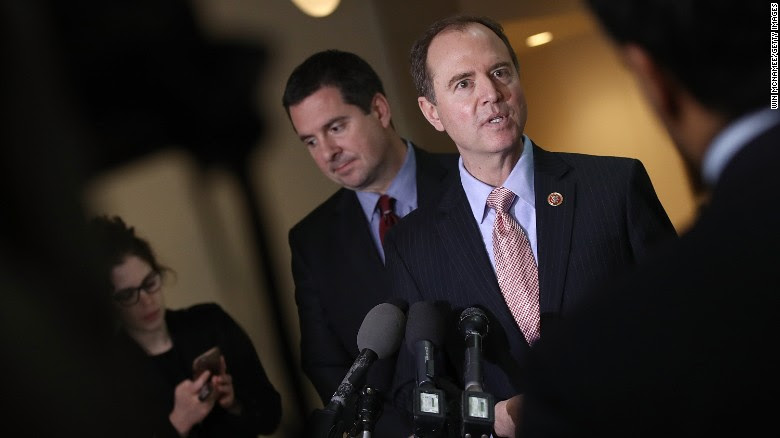 
The leaders of the House Intelligence Committee asked the three leaders of the intelligence community Wednesday about any time during the last seven months of the Obama administration whenever any of its agents and officials improperly named, or "unmasked," and disseminated the identities of American citizens picked up in intelligence collection.
Chairman Devin Nunes, R-California, and Ranking Member Rep. Adam Schiff, D-California, wrote that they were concerned that members of the intelligence community have not been sufficiently honoring previously established "robust 'minimization procedures'" to protect the identities of US citizens, including "masking" their names. The letter they sent refers to the disclosure to the public that former National Security Adviser Michael Flynn had several conversations with the Russian Ambassador.
The matter is relevant not only because of the House Intelligence Committee's responsibility to conduct oversight of the intelligence community, but also as it may relate to surveillance of Russians known to US intelligence or any others who may have spoken with any advisers or individuals around then-candidate Donald Trump.
Nunes and Schiff asked the intelligence community leaders to disclose any "unmasked" identities that were disseminated throughout the intelligence community, law enforcement, or among senior Obama administration officials from June 2016 until January 2017 that relate to Trump or Hillary Clinton and their associates.
An informed source told CNN that if Russian Ambassador Sergey Kislyak was being surveilled, Flynn's name should not necessarily have been included on the intelligence report. Rather, "American Citizen 1" or a similar anonymous term should have been used.
"However, as recent news stories, seem to illustrate, individuals talking to the media would appear to have wantonly disregarded these procedures," Nunes and Schiff wrote. The congressmen also asked the names of individuals or agencies who "requested and/or authorized the unmasking and dissemination" of these identities.
The letter was addressed to Admiral Michael Rogers, the director of the National Security Agency; FBI Director James Comey; and CIA Director Mike Pompeo. The acting Director of National Intelligence Michael Dempsey was also included.
Source>http://www.cnn.com/2017/03/15/politics/house-intelligence-committee-unmasking/index.html
Posted by theodore miraldi at 8:20 AM