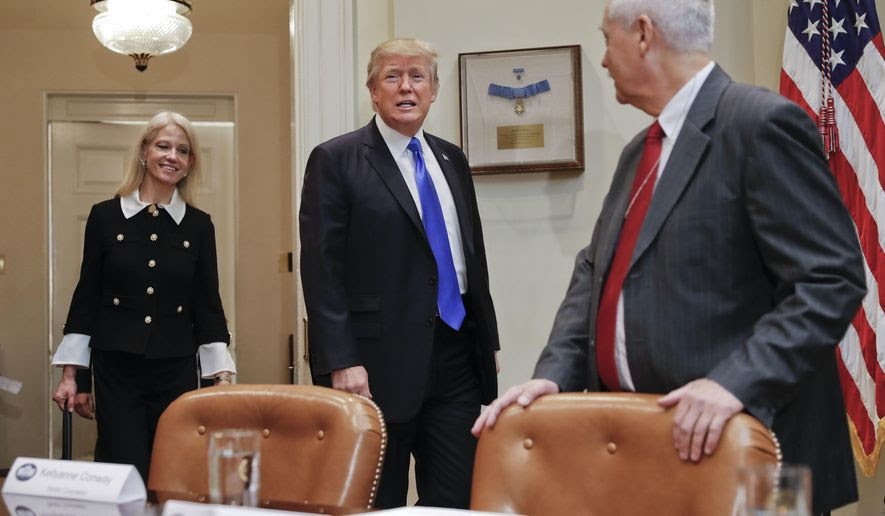 Trump presidential transition officials had their communications monitored and “unmasked” by the intelligence community, the chairman of the House intelligence committee said Wednesday, offering the first major piece of evidence of possible illegal activity by Obama officials against Donald Trump as president-elect.
Rep. Devin Nunes, California Republican, said Mr. Trump’s own communications might have been monitored.
All of the information appears to have been scooped up legally and incidentally, meaning the Trump officials weren’t the targets. They may have been gathered by foreign intelligence and then shared with the U.S. under existing agreements, one lawmaker said.
But at some point U.S. intelligence officials unmasked some Trump figures — a process that involves attaching their names to the private conversations. That information was then circulated within the intelligence community, Mr. Nunes said.
“I have seen intelligence reports that clearly show the president-elect and his team were at least monitored and disseminated in what appears to be intelligence reporting channels,” said Mr. Nunes, who was part of the Trump transition team.
Mr. Nunes said several dozen examples of surveillance reports were brought to him after he issued an open call for any evidence of illegal behavior. He said the material he saw appeared to have been gathered during the transition, from November to January.
The congressman said there still is no evidence that Trump Tower in New York was wiretapped, contradicting Mr. Trump’s brash assertions this month.
But the congressman said the information brought to him does suggest that some in the intelligence community were following the activities of the Trump team closely.
“There was some level of surveillance activity — perfectly legal — but I don’t think the American people would be comfortable with it,” Mr. Nunes said.
Mr. Trump, who has insisted that evidence will eventually prove his claims of wiretapping correct, said Mr. Nunes‘ revelations felt like a vindication.
“I somewhat do. I must tell you I somewhat do,” the president said in response to a reporter’s question. “I very much appreciated the fact that they found what they found.”
Democrats brushed aside the new information, saying Mr. Nunes was mishandling the situation and that it was more reason to appoint an independent commission and a special prosecutor to investigate.
“This could be a lot of theater. It looks trumped up to me,” Rep. Jackie Speier, California Democrat and a member of the intelligence committee, told MSNBC.
Rep. Adam B. Schiff of California, the ranking Democrat on the committee, said Mr. Nunes had yet to share the new information with him, but based on their conversations, the information could all have been handled correctly.
“The chairman informed me that most of the names in the intercepted communications were in fact masked, but that he could still figure out the probable identity of the parties,” Mr. Schiff said. “Again, this does not indicate that there was any flaw in the procedures followed by the intelligence agencies. Moreover, the unmasking of a U.S. person’s name is fully appropriate when it is necessary to understand the context of collected foreign intelligence information.”
After revealing his findings in a press conference on Capitol Hill, Mr. Nunes visited the White House to brief Mr. Trump personally.
Mr. Trump and his aides have been beset by a number of leaks from within the intelligence community, and the president has demanded an investigation into those leaks.
It was already known that former Trump National Security Adviser Michael Flynn’s communications were ensnared by intelligence gathering and his name was attached to it in intelligence documents.
Mr. Nunes said it now appears others were unmasked.
That process is supposed to protect Americans from disclosure, but it appears to have broken down in this case. “I’m really bothered by the unmasking,” Mr. Nunes said.
Asked whether this information backed up Trump officials’ accusations of spying, he replied, “I guess it all depends on one’s definition of spying.”
Mr. Nunes, whose committee is investigating suspicions that Trump campaign officials colluded with Russians and the president’s “wiretapping” claims, said the surveillance material that included Trump transition officials did not involve Russia.
The House Permanent Select Committee on Intelligence is just one of the congressional panels investigating Trump campaign dealings with Russia.
The House Oversight and Government Reform Committee on Wednesday formally asked the White House, FBI, Defense Department and Director of National Intelligence to surrender all documents related to Mr. Flynn’s foreign contacts and payments.
In a March 22 letter, the committee asked for information related to Mr. Flynn’s communications with Russian, Turkish or other foreign sources, including the Kremlin-backed media outlet RT and the speakers’ bureau, Leading Authorities Inc., which RT used to pay Mr. Flynn an appearance commission at an event in Russia.
Meanwhile, The Associated Press reported Wednesday that onetime Trump campaign manager Paul Manafort worked for a Russian billionaire on a plan to advance President Vladimir Putin’s agenda in the U.S. and Europe.
White House press secretary Sean Spicer said the report didn’t suggest any wrongdoing by Mr. Trump or the White House. Mr. Spicer also tried to minimize Mr. Manafort’s five months with the campaign and said the work Mr. Manafort was reported to have done for the Russian billionaire was a decade old.
Source>http://www.washingtontimes.com/news/2017/mar/22/trump-officials-unmasked-intel-community/
Posted by theodore miraldi at 9:00 AM