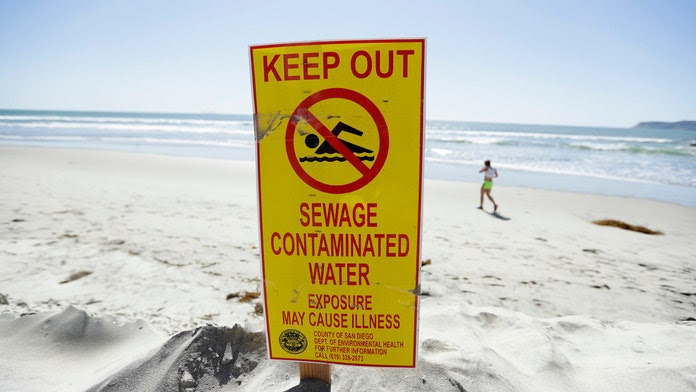 
During the 17 days that 140 million gallons of raw sewage poured from Mexico into the Tijuana River and then into the ocean fronting several popular South San Diego communities, no Mexican official disclosed the potential health and environmental hazards.
Despite the silence when the spill began Feb. 6, some 200,000 people living in South San Diego, Imperial Beach and Chula Vista knew there was something amiss. Even a mile away from the Tijuana River they could smell the eye-watering, throat-burning, overwhelming smell of raw sewage. They’d eventually learn this was the worst sewage spill in the region in a decade.
The spill resulted in several miles of beaches being closed for five to six weeks from the Mexican border north to the city of Coronado. One beach by the border is still closed.

Expand / Contract
“For San Diego, which is defined by its relationship with the ocean, this kind of massive sewage spill across the border is unacceptable,” U.S. Rep. Scott Peters, a Democrat who represents some of the affected areas, told Fox News. “From surfing, to the Navy and Marine Corps presence, it drives our way of life and large parts of our economy.”
The U.S. International Boundary Water Commission, which operates under the U.S./Mexican Water Treaty of 1944 to oversee sanitation, water quality and flood control in the border region, is investigating the recent sewage spill, and why Mexican wastewater authorities didn’t report it even as sewage was visible in the ocean and beaches.
“We need cooperation on both sides of the border for this investigation to get all of the answers on how this sewage spill happened. Then we can figure out how to apply resources across the border to prevent it from happening again,” Peters said.
Serge Dedina, mayor of Imperial Beach, a working class beach community whose border abuts the Mexican border, said it was frustrating the spill hadn’t been reported, even though it could impact the health of beachgoers, surfers, those using the many trails through South San Diego for biking or hiking and the small business owners that run the many organic farms, ranches and equestrian centers along the border.
“We never had anything like this – such consistent complaints and duration of the stench, so we knew it was a pretty severe problem,” Dedina said to Fox News.

Expand / Contract
But this isn’t a one-time occurrence -- Dedina deals with the sewage problems that flow from Mexico every single day. A lifelong resident of Imperial Beach, Dedina has been working seriously on the sewage issue since 2004. Since becoming mayor two years ago he has worked daily on the problem. He is considered one of the leading experts on the matter.
“The real issue is that this consistently happens, there is no accountability, there is very little transparency and almost no commitment to fix the problem,” Dedina said.
Mexican sewage flows into the U.S. in two ways. Between 30 and 40 million gallons of sewage are discharged every day onto the beach from Mexico’s Punta Banderas sewage treatment plant six miles south of the border, and during south swells and south winds, the sewage washes up on U.S. beaches, Dedina said.
“We assume everything is good, and then go in the water, and then realize too late, we are awash in sewage. It is the worst feeling ever,” said Dedina, an avid surfer. “Last summer, we had some of the worst consistent flows of sewage across the border that we ever experienced.”
The second way Mexican sewage flows into the U.S. is from the Tijuana River. About 15 million gallons per day of treated sewage discharged into the Tijuana River, Dedina said.
“There is a diverter pipe in the Tijuana River operated in Mexico just before the border that in theory should be turned on all the time — but if there is an electrical outage or it breaks down, which happens frequently, then the Tijuana River flows into the U.S. and can pollute our beaches,” Dedina said.
The International Boundary and Water Commission reports Mexico has no plans or timeline at all to turn on the diverter pipe, Dedina said, which means the river of treated sewage will flow freely into the U.S.

Expand / Contract
Border Patrol Agents who work along the Tijuana River have been impacted by the dust and smells. A decade ago, the National Border Patrol Council, which is the exclusive representative of some 2,400 Border Patrol agents, filed a related lawsuit and fought for “hazard pay” for the agents in San Diego.
“We have had have had some complaints from agents about feeling sick or nauseous because of the sewage spill,” confirmed union president Terence Shigg, noting the union could take further when the results of recent environmental tests are returned.
Imperial Beach adjoins Coronado, which has a large military presence. The Navy SEALs used to train in Imperial Beach, but because of health concerns the Navy relocated the training, Dedina said.
Besides being home to the famous big wave surfing spot known as the Tijuana Sloughs, Imperial Beach is surrounded by stunningly beautiful wildlife refuge sanctuaries. But last year when it rained, sewage flooded the estuary and hundreds of leopard sharks, among other sea creatures, died.
Dedina suggests there should be a river management plan, new and upgraded infrastructure and regular river cleanups.
In the last week there has been some good news, Dedina said. The Mexican federal government and the governor of Baja have joined the effort to upgrade the sewage system in Tijuana, which will be funded partly by the U.S. taxpayers through the North American Development Bank and partly by the Mexican federal government.
“This is a big step,” Dedina said.
Source>http://www.foxnews.com/us/2017/03/17/mexican-sewage-routinely-fouling-san-diego-beaches-ocean-waters.html
Posted by theodore miraldi at 4:51 PM