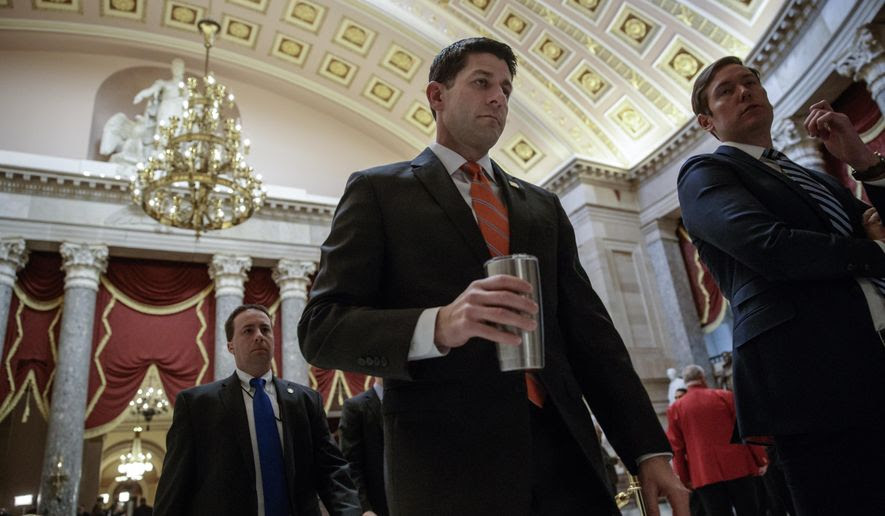 
ANALYSIS/OPINION:
House Speaker Paul Ryan didn’t just step in it again, big time, on the Ryancare bill this week. The Wisconsin Republican unmasked himself as the man most capable of demolishing his own party and the Trump presidency.
The Ryan American Healthcare Bill is a piece of moderate GOP trash that Mr. Ryan owns and has been trying and failing miserably to sell as the long-promised Republican repeal and replacement of Obamacare.
By telling conservatives in the House and across America to go have intimate relations with themselves and not meddle in the medical-care matters of him and the rest of what passes as House GOP leadership, he has done American politics a favor.
Specifically, he has convinced many conservatives that his time as maximum leader of House Republicans might best end before even more damage is done to the other lawmakers in his party, to President Trump and to the brand of the party and the president.
Politicians in both parties and the press call the bill “Ryancare.” If it passes — and it won’t — Democrats and eventually angry Republicans will be calling it Trumpcare. Talk about brand destruction.
Mr. Trump is not a policy guy. He doesn’t know the ins and outs of healthcare legislation, let alone of a bill that the tight little Ryan crew guided through the House this far, with no conservative consultation or approval.
Mr. Ryan, with the historically august title of House speaker, sold Mr. Trump a bill of goods, namely that the bill will appease conservatives and moderates in the GOP Congress and in the hinterland, get everyone re-elected in 2018 and 2020 and everyone could go to the seashore on Sunday.
Rep. Thomas Massie Kentucky, a conservative Republican, says Mr. Trump can kiss a second White House term goodbye if the House passes Ryancare.
It won’t. The Ryan runts all caved as daylight faded on Thursday, calling off a planned vote. There should not be a vote tomorrow either.
First, Mr. Ryan and friends need to have explained why the GOP cannot appease moderates and expect to remain the majority party it now is, as measured by the presidency, the U.S. House, the U.S. Senate, the governorship of the states and their legislatures.
The Trump-Ryan claim — that a health-care bill that’s imperfect in its failure to reduce premiums and deductibles when it leaves the House can and will be improved in the Senate — is foolish. And that means it will make the president look foolish.
Nice going, Mr. Speaker.
Source>http://www.washingtontimes.com/news/2017/mar/23/paul-ryan-unmasks-himself-biggest-threat-gop-trump/
Posted by theodore miraldi at 7:53 AM