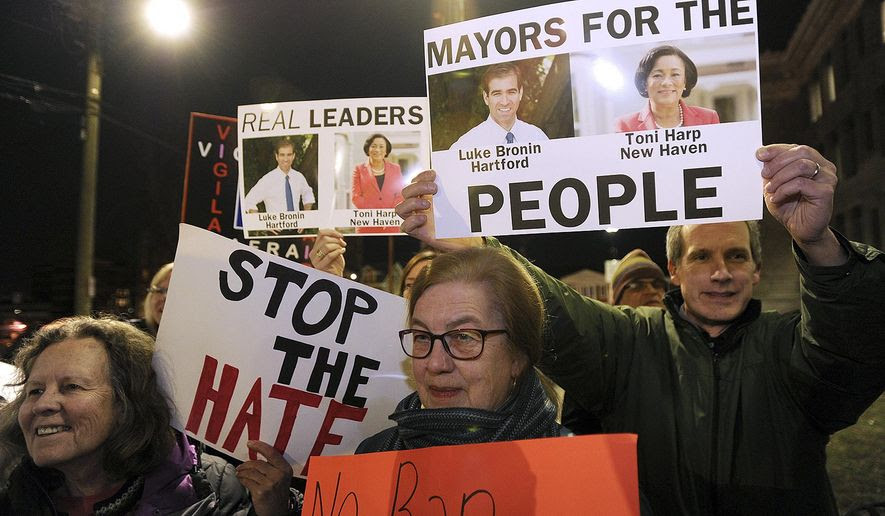 
ANALYSIS/OPINION:
The David Horowitz Freedom Center in Los Angeles is kicking into high gear a campaign against 11 schools in California known as safe havens for illegals, telling them, in no uncertain terms: Stop the sanctuary madness. Or else we’ll prosecute you “for sedition,” group founder Horowitz wrote, in an online post.
And by classic dictionary definition of sedition — an incitement of rebellion against government — Horowitz has a great point.
“Sanctuary campuses are not only part of a radical attack on America’s social, political and educational establishment but a dagger aimed at the rule of law and the nation’s security,” he wrote.
Horowitz’s group is also demanding California’s school system oust its president, Janet Napolitano, while calling on the federal government to strip all funding from campuses that refuse to comply with border laws.
This is a good start.
Currently, 500 or so cities around the nation, mostly controlled by Democrats, have vowed to fight federal deportation laws — or, more to truth, federal deportation laws under the President Donald Trump administration.
These same cities headed by these same Democratic politicos were quite OK with federal deportation policies when they were controlled by Barack Obama. You know, the ones that said turn a blind eye to illegals? Democrats then believed federal entities, not state leaders, held the constitutional authority to enforce border law.
But now that Trump’s taken office, all of a sudden these same Democrats have discovered the 10th Amendment. All of them have suddenly become experts in states’ rights. All of them suddenly have found a love for a bottom-up type of governing, rather than top-down.
Taking strong steps — like suing for sedition — is about the only way to grab these leftists’ attention and make clear the message: We’re taking back our country.
As Horowitz writes: “With its proposed budget, the Trump administration has taken the first step in dealing with this internal threat to American security by withdrawing federal funding for criminal municipalities and counties which are in open defiance of federal law. De-funding is a good first step but is not enough to counter-act the serious threat that the sanctuary movement poses to our nation’s security in the midst of the global war that Islamists have declared on us. What is needed is the prosecution of the criminal officials leading this movement. The Department of Justice needs to investigate and indict the mayors of these municipalities and the derelict presidents and chancellors of sanctuary campuses.”
The Freedom Center’s no-holds-barred approach to this sanctuary scenario includes the putting up of “Wanted” posters of Napolitano’s face, along with that of Cal State University Chancellor Timothy White, at key campus spots. The posters also call for them to be prosecuted for sedition.
Attention-grabbing? You bet.
Likely to result in sedition prosecutions? Probably not.
But at the least, the “No Sanctuary Campuses” campaign is a refreshing, bold change of pace from the Obama amnesty years. And who knows? The left may not tremble — the Democrats may not stop their sanctuary policies. But creating a hostile enough environment for sanctuary spots may send the illegals fleeing America, anyway.
Source>http://www.washingtontimes.com/news/2017/mar/24/california-campuses-sheltering-illegals-threatened/
Posted by theodore miraldi at 8:05 AM