The SAGACITY of Ross Perot 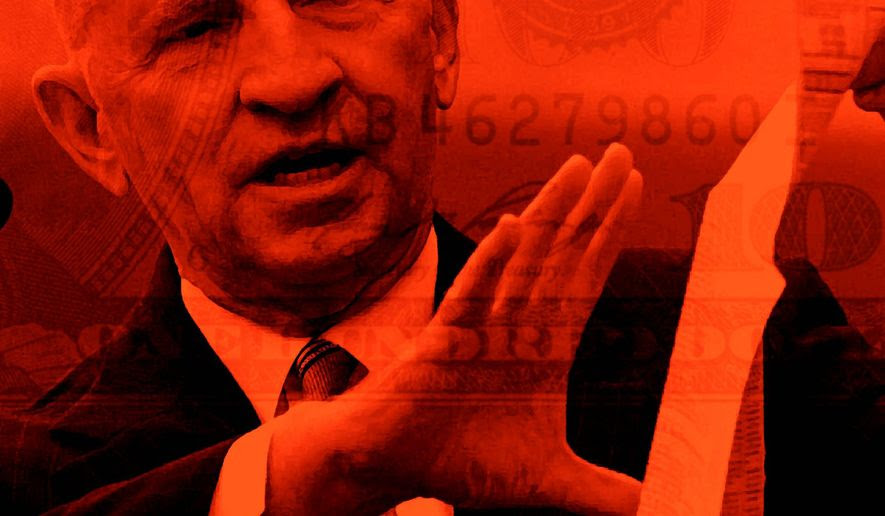 ANALYSIS/OPINION:
Politicians generally don’t share the details on tough issues if they’re expected to answer the question: “What’s your solution?”
Exhibit A is the national debt, which reached $20 trillion this year — or $164,000 for every income taxpayer in the country. Because politicians don’t have a plan to address this issue that satisfies most of their constituency, they operate as if it doesn’t exist.
Yet the Congressional Budget Office (CBO) estimates that Social Security, Medicare, Medicaid (and other health programs), and net interest payments will exceed all income, payroll and corporate tax revenue in roughly 15 years. The federal debt, which doubled under President Obama and doubled before that under President Bush, will rise to a staggering $91 trillion by 2047.
Why isn’t this terrifying conclusion common knowledge? First, the budget gnomes at the CBO bury this conclusion in a table on Page 106 of their report and display it as a multiple of projected gross domestic product. Second, the public generally can’t conceive of how big a trillion is. A million seconds will pass in 12 days. Guess how long it takes a trillion seconds to elapse? More than 30,000 years. Thinking in trillions is the mental gymnastics equivalent of time-space as the fourth dimension.
The last politician to really lay out our debt problem was Ross Perot. His 1991 charts simplified the then-$4 trillion debt problem and brought home the consequences of fewer retirement benefits, less security and increased taxes to the American public. (Voters rewarded his honesty with a surprising 19 percent of the presidential vote in a three-way race despite his less than charming personality.)
We need today’s generation of politicians to channel their inner Perot. They can start by framing the debt in the late economist Herb Stein’s maxim: “If something cannot go on forever it will stop.” And when it does stop it will either be a soft landing or a train wreck.
Perhaps the biggest reason why the country’s dire debt future is greeted with a collective shrug is because left-wing pundits and Keynesian economists have successfully framed it as a nonissue. In a column titled “Debt is Good,” Paul Krugman argues, “[P]art of what ails the world economy right now is that governments aren’t deep enough in debt.”
If the growing debt carried no interest, this argument might be persuasive. But skyrocketing interest payments driven by the growing debt and rising interest rates will at best crowd out other spending priorities, cut retirement benefits and drive up tax rates. At worst, they will contribute to a debt spiral and national fiscal crisis.
Last year, the country spent $241 billion on net interest payments. That’s more support money than we spent on food stamps, housing subsidies, the earned income tax credit, and school lunches combined. The CBO expects interest payments to explode to over $3 trillion by 2047.
According to an analysis of the CBO’s projections, interest payments will rise from the current level of 16 percent of federal income tax revenue to over a quarter 10 years from today. By 2047, roughly half of income tax revenue will be spent on interest payments.
Arguably the government has an option to deal with its debt that’s unavailable to a household or consumer: printing huge amounts of dollars to pay for it. I have a $100 trillion bill from Zimbabwe on my desk that illustrates the hyperinflation implications writ large of that approach.
Want a solution? The voters must embrace entitlement reforms. Spend less and we will borrow less.
How about our political leaders suggest that Social Security be reduced by 1 percent every year for 10 years. That start would save over $1 trillion cumulatively. Surely most people would agree that if necessary they can get by with a cut of a penny on every dollar the government sends to them. The age at which benefits can be drawn should be increased to 70. With much longer life expectancy than in 1935 when Social Security was passed, people need to have their expectations recalibrated.
And these spending reforms will not be enough. Tax increases? There aren’t enough rich people to make much of a difference until you start tapping the huge middle class. These aren’t math problems. They’re political in nature.
What we need is Perot-like leadership on the issue delivered in a calm voice (with updated charts). That would be a great place to start.
Source>http://www.washingtontimes.com/news/2017/mar/27/ross-perot-knew-about-debt-problems/
Posted by theodore miraldi at 7:12 AM