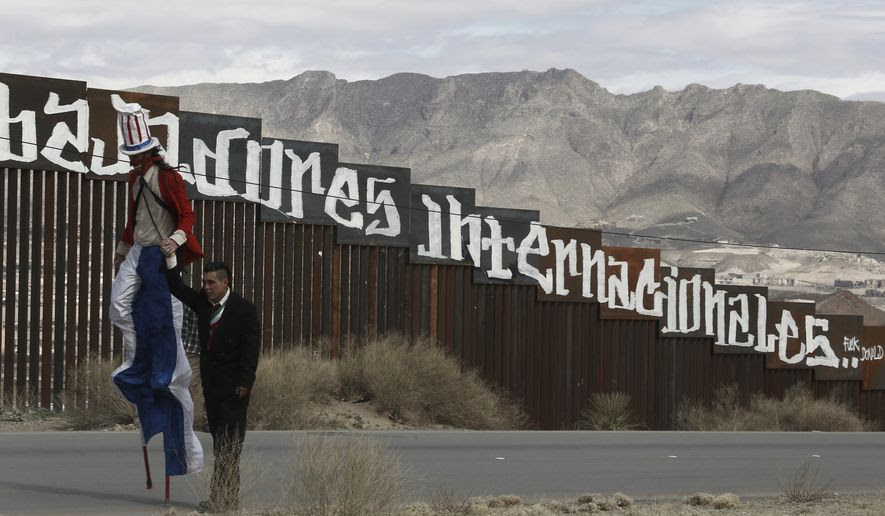 President Trump’s new border wall is supposed to be 30 feet high and should look imposing to potential illegal immigrants, Homeland Security officials said in documents Friday that officially requested the first bids to begin building the barrier along the U.S.-Mexico border.

But U.S. Customs and Border Protection, the agency overseeing the project, hasn’t yet decided on whether it will be concrete or some other type of construction, instead soliciting bids for various prototypes.
“The wall design shall be physically imposing in height,” CBP officials said in contracting documents.
They said their goal is a 30-foot barrier, and they would outright reject any plans that didn’t at least run 18 feet high. The wall must also run at least six feet underground to stop anyone easily tunneling underneath it.
And it must take at least an hour, and ideally more than four hours, for someone to puncture a hole in the wall — presumably enough time for agents to discover and chase away anyone attempting it.
The side that faces the U.S. must be easy on the eyes, too, the documents say.
The requests for proposals for both concrete and non-concrete walls come less than two months into the new administration, and signal Mr. Trump’s eagerness to get started on his signature campaign proposal.
Just a day earlier, the White House released its first budget calling for about $1 billion in money to begin building the wall over the next six months, and called for more than $2 billion in fiscal year 2018.
The contracting documents don’t give a hint as to the eventual scope of the wall, but Mr. Trump’s budget suggested it would in fact run the nearly 2,000 miles of the border. And the documents did call for designs that would work on a 45-degree slope, indicating a desire to build fencing even along mountainous areas where the border patrol had previously thought barriers unnecessary.
Currently about 654 miles of the border have a barrier — 354 miles of that is a type of pedestrian fence, while the other 300 miles are vehicle barriers designed to stop cars and trucks, but which easily let people and animals through.
The existing pedestrian fencing varies in design, but types of fence that have alternative slats allowing Border Patrol agents to see through to the Mexican side are preferred because they help cut down on ambushes by rock-throwers, according to a recent government audit.
That could be a problem for the concrete wall design. Indeed the solicitation for the non-concrete wall specifically asks for a “see-through component” to the wall. The concrete solicitation doesn’t ask for that same consideration.
The solicitation released Friday night calls for prototypes.
When CBP first began gauging interest earlier this month some 700 companies had registered as potential vendors for building the wall.
But those that do get contracts could face a backlash.
The city of Berkeley, California, said this week it would refuse to do business with any company that’s part of the border wall.
Source>http://www.washingtontimes.com/news/2017/mar/18/donald-trump-officially-requests-bids-build-border/
Posted by theodore miraldi at 5:53 PM