'TUCKER EXCLUSIVE'
President Trump discussed his tweeted accusation that President Obama ordered "wires" at Trump Tower tapped during last year's presidential campaign in an exclusive interview with Fox News' "Tucker Carlson Tonight" Wednesday.
Trump told host Tucker Carlson that the administration "will be submitting things" to the House Permanent Select Committee on Intelligence "very soon." The president added that he "will be, perhaps speaking about this next week" and predicted that "you’re going to find some very interesting items coming to the forefront over the next 2 weeks."
When asked by Carlson why he tweeted about the alleged phone tap before producing evidence, Trump said his definition of wiretapping "covers a lot of different things."
"That really covers surveillance and many other things," he said. "Nobody ever talks about the fact that [the words 'wires tapped'] was in quotes [in the tweet], but that’s a very important thing."
Trump also addressed the swirling debate around the repeal-and-replace healthcare legislation that's split Republican lawmakers. Trump called himself an "arbitrator" and said changes and negotiations to the bill would be forthcoming -- despite rhetoric to the contrary from House Speaker Paul Ryan. 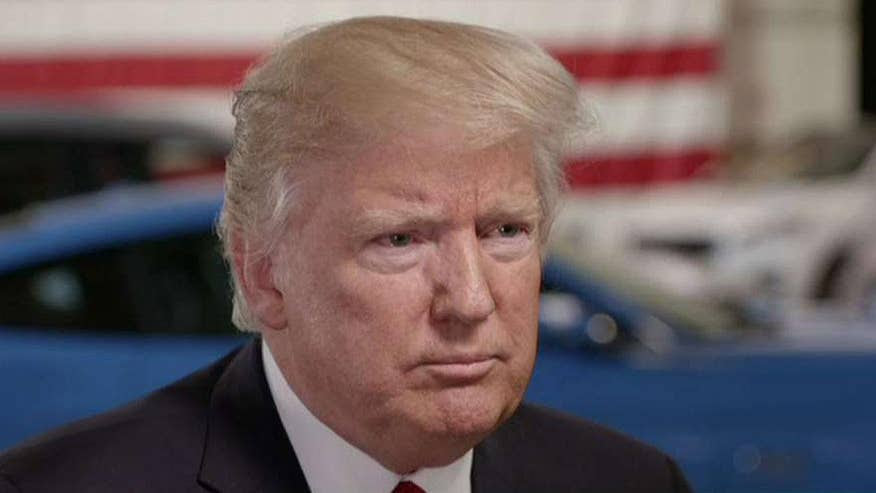 "We will take care of our people or I'm not signing it, OK?" Trump said. "Just so you understand. This is very preliminary."
Trump defended his ongoing use of social media while in office, saying that "maybe I wouldn't be here if it wasn't for Twitter, because I get such a fake press, such a dishonest press.
"I'm not including Fox," the president added, "because I think Fox has been fair to me ... [but] the news is not honest, much of the news. It's not honest, and when I have close to 100 million people watching me on [social media], I have my own form of media."
When Carlson countered that Trump "devalues his own currency" if allegations he makes on Twitter turn out to be untrue, the president responded, "Well, let's see whether or not I prove it."
"If I don't do that, I won't get my word out, because when I say things, the press doesn't cover it accurately," Trump later said. "If they're not going to do me the honor or the public the honor of spreading my word accurately ... when I can reach that many people, Twitter is a wonderful thing for me, because I get the word out."
When Carlson asked whether any of the president's tweets were moderated by his staff, Trump responded, "Sure ... A lot of times, my staff comes to me and they say, 'Can you do a tweet on this or that because it's not being shown correctly.'"
Trump also responded sharply to the leak of two pages of his 2005 tax returns, calling the MSNBC report "a disgrace."
"I have no idea where they got it but it’s illegal and they’re not supposed to have it and it's not supposed to be leaked, and it’s certainly not an embarrassing tax return at all, but it’s an illegal thing they’ve been doing it, they’ve done it before and I think it’s a disgrace," he said.
The commander-in-chief's comments came afterDCReport.org reporter David Cay Johnston revealed 2005 Trump tax documents to MSNBC host Rachel Maddow.
Source>http://www.foxnews.com/politics/2017/03/15/trump-says-will-submit-evidence-wiretapping-to-house-committee-very-soon.html
Posted by theodore miraldi at 7:30 AM