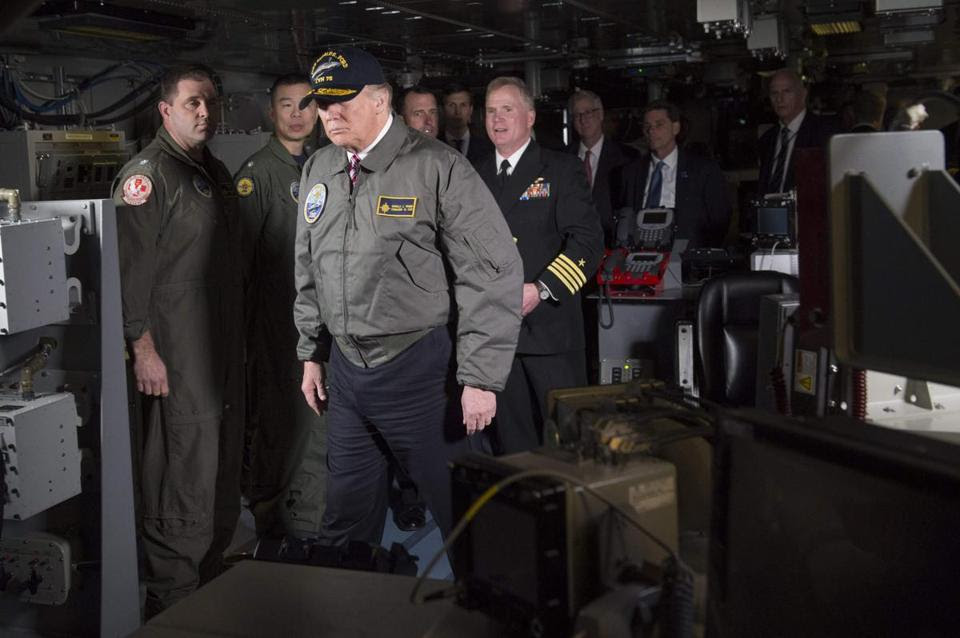 Karoun Demirjian
WASHINGTON - President Donald Trump says he ‘‘wasn’t aware’’ that his attorney general —former Sen. Jeff Sessions — had contact with the Russian ambassador during last year’s White House campaign.
Trump made the comment in Newport News, Virginia, before giving a speech aboard the USS Gerald Ford.
Sessions spoke twice with Russia’s ambassador to the United States during the campaign. Those conversations appear to contradict Sessions’ testimony to Congress during his confirmation hearings.

Democrats are demanding that Sessions resign over the contact, while Democratic leaders and some Republicans say Sessions should step aside from a federal investigation into Russian interference in the election.
Earlier on Thursday, Trump said he has “total” confidence in Attorney General Jeff Sessions.
Trump made the comment in Newport News Thursday. Asked if Sessions should recuse himself, he said ‘‘I don’t think so.’’
Democrats are demanding that Sessions resign after the revelation that he had twice talked with Moscow’s envoy to the U.S. during the campaign.
House Majority Leader Kevin McCarthy , R-Calif., said Thursday that Sessions should recuse himself from investigations of whether Russia interfered in the presidential 2016 election at the Justice Department and FBI.
To maintain ‘‘the trust of the American people, you recuse yourself in these situations,’’ McCarthy said during an appearance on MSNBC Thursday morning, noting it would simply ‘‘be easier’’ for the public to have confidence in the investigation if Sessions bowed out.
Minutes later, House Oversight and Government Reform committee chairman Jason Chaffetz, R-Utah, joined McCarthy’s call, tweeting that ‘‘AG Sessions should clarify his testimony and recuse himself.’’

McCarthy’s comments follow revelations that Sessions met with the Russian ambassador during election season. Under oath in front of the Senate Judiciary Committee for his confirmation hearing in January, Sessions had said that he had not met with any Russian officials.
‘‘I don’t have all the information in front of me, I don’t want to prejudge, but I just think for any investigation going forward, you want to make sure everybody trusts the investigation,’’ McCarthy said. ‘‘I think it'd be easier from that standpoint’’ for Sessions to recuse himself.
According to Justice Department officials, Sessions, a top Trump supporter, met with Russian Ambassador Sergey Kislyak twice in 2016, including one September meeting in his office.
McCarthy is the first prominent Republican to call for Sessions to recuse himself. Some Democrats went further, calling on Sessions to resign and demanding an independent investigation.
‘‘After lying under oath to Congress about his own communications with the Russians, the Attorney General must resign,’’ House Minority Leader Nancy Pelosi, D-Calif., said in a statement released late Wednesday, adding that ‘‘Sessions is not fit to serve as the top law enforcement officer of our country.’’
On Thursday morning, Ohio Sen. Rob Portman says in a statement that Sessions is a former colleague and a friend, ‘‘but I think it would be best for him and for the country to recuse himself from the DOJ Russia probe.’’
Sen. Ron Wyden, D-Ore., a senior member of the Senate Intelligence Committee, is also demanding a special counsel to investigate the Trump administration for ties to Russia, ‘‘given AG Sessions’ false statements about contacts with Russia.’’
And House Oversight and Government Affairs ranking Democrat Elijah E. Cummings of Maryland called for Sessions to resign. He criticized the attorney general for keeping ‘‘secret’’ his conversations with Kislyak, even after then-national security adviser Michael Flynn was fired for misleading Vice President Pence about his contacts with the same Kremlin official.
‘‘When Senator Sessions testified under oath that ‘I did not have communications with the Russians,’ his statement was demonstrably false, yet he let it stand for weeks,’’ Cummings remarked in a statement. ‘‘Attorney General Sessions should resign immediately, and there is no longer any question that we need a truly independent commission to investigate this issue.’’
Meanwhile, White House spokesman Sean Spicer defended Sessions — saying that Sessions was ‘‘100 percent straight’’ about his contacts with Russia during his Senate confirmation hearings.
Spicer told Fox News that ‘‘there’s nothing’’ for Sessions ‘‘to recuse himself’’ from.
Spicer said people are ‘‘choosing to play partisan politics’’ and ‘‘should be ashamed of themselves.’’
Other Senate Republicans rallied around Sessions, saying they trust him and that it’s up to Sessions whether to recuse himself.
Sen. Richard Burr of North Carolina chairs the Senate Intelligence Committee. He said, ‘‘I trust Jeff Sessions to make that decision.’’
In a statement following the report, Sessions denied he had met with ‘‘any Russian officials to discuss issues of the campaign. I have no idea what this allegation is about. It is false,’’ he said.
Republicans were more cautious in their remarks, but there were signs that they could step up calls for an outside investigation of the Trump team’s ties to Russia as a result of the Sessions news. Right now, the probes are being handled by the House and Senate Intelligence panels, and the FBI is investigating possible Russian interference in the election and the Trump team’s possible ties to Kremlin officials.
Sen. Lindsey O. Graham , R-S.C., said at a CNN town hall Wednesday night that if there is any substance to allegations regarding the Trump team and Russia, then Sessions cannot be the person to assess them.
‘‘If there is something there and it goes up the chain of investigation, it is clear to me that Jeff Sessions, who is my dear friend, cannot make that decision about Trump,’’ Graham said, stressing that Sessions’ contacts with the Russian ambassador could have been ‘‘innocent.’’
‘‘There may be nothing there,’’ he continued. ‘‘But if there’s something there that the FBI believes is criminal in nature, then for sure you need a special prosecutor. If that day ever comes, I'll be the first one to say it needs to be somebody other than Jeff.’’
Said frequent Trump critic John McCain, R-Ariz.: ‘‘I think we have to know more about it before we make a judgment.’’
The growing chorus of Democratic lawmakers calling for Sessions’s resignation or recusal marks the most serious demands yet to remove Sessions - a Trump campaign adviser - from the chain of command in a probe at the Department of Justice he heads. Previously, Democrats demanded that Sessions to recuse himself from Russia-related proceedings, and some lawmakers continued to insist on recusal in the wake of the latest revelations.
Several Democratic lawmakers on Wednesday night questioned whether Sessions had lied under oath when he testified at his confirmation hearing in January that he had not had any communications with Russian officials. Reps. Jared Polis, D-Colo., and Mike Quigley, D-Ill., asked whether the former senator provided false statements in his testimony to lawmakers.
On Twitter, Sen. Elizabeth Warren, D-Mass. - a leading progressive and Trump antagonist - repeated calls for a special prosecutor to probe Russian influence in the elections and ties to Trump. She also called on Sessions to resign.

Elizabeth Warren
✔ @SenWarren
We need a special prosecutor totally independent of the AG. We need a real, bipartisan, transparent Congressional investigation into Russia.

Elizabeth Warren
✔@SenWarren
And we need Attorney General Jeff Sessions – who should have never been confirmed in the first place – to resign. We need it now.

Sen. Brian Schatz, D-Hawaii, also weighed in with a tweet: ‘‘I'm thinking Jeff Sessions is not the right person to investigate Jeff Sessions.’’

Material from the Associated Press was used in this report.
Source>http://www.bostonglobe.com/news/politics/2017/03/02/top-gop-lawmaker-calls-sessions-recuse-himself-from-russia-investigation/3DZ8mF1U6Yc7xT6fiX53cI/story.html
Posted by theodore miraldi at 4:01 PM