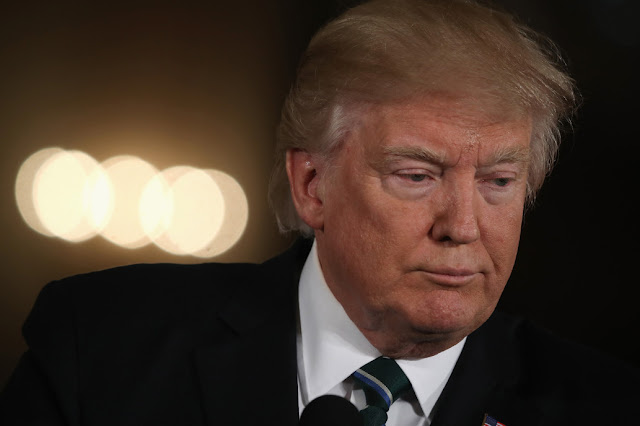 
President Trump’s approval rating has taken a nosedive, according to the latest Gallup poll.
Only 37 percent of respondents approve the job the president is doing – the lowest level since he took office, while 58 percent disapprove, the poll found.
Trump’s approval rating was 45 percent a week earlier.
Other presidents have experienced even lower ratings, but Trump is the first commander-in-chief in at least 70 years to have dropped this low by March of their first term, according to Gallup.
His plummeting numbers come as the GOP seeks to push through the proposal to repeal and replace the Affordable Care Act, better known as ObamaCare.
Trump also has faced a roadblock with his revised travel plan after a federal judge in Hawaii issued a temporary restraining order against it.
“We’re going to take our case as far as it needs to go, including all the way up to the Supreme Court,” Trump told a crowd during a rally in Tennessee last week. “We’re going to win. The danger is clear. The law is clear. The need for my executive order is clear.”
Trump also has faced criticism for his handling of alleged Russian ties and his tweeted claim that President Obama “wire tapped” Trump Tower.
FBI Director James Comey is expected to testify Monday before the House Intelligence Committee about Russia’s involvement in the 2016 election and the still unproven wiretapping claim.
Earlier this month, a Fox News poll showed Trump’s approval rating had dropped by 5 percentage points since last month.
The survey found that 43 percent of voters approved of the job he was doing compared to 51 percent who did not.
The Gallup poll, which included about 1,500 adults nationwide, has a margin of error of plus or minus 3 percentage points.
Source>http://nypost.com/2017/03/20/trumps-approval-rating-keeps-sinking-to-new-lows/
Posted by theodore miraldi at 8:26 AM