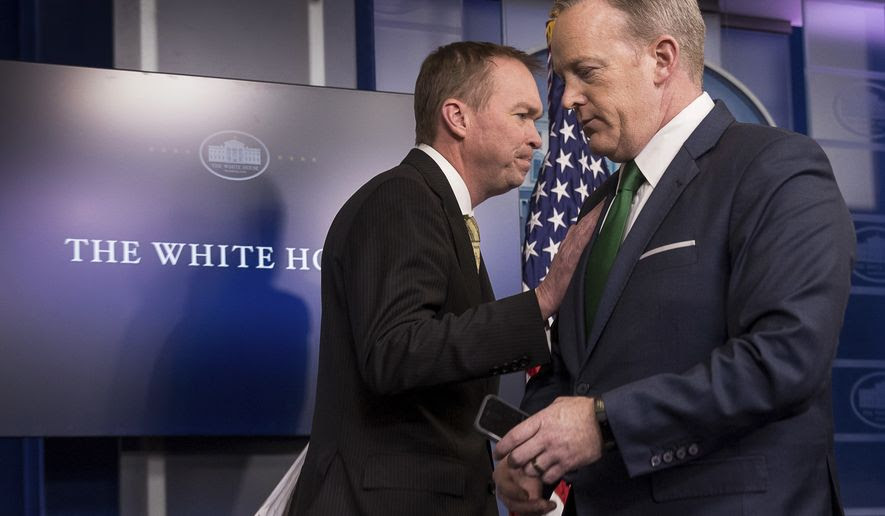 
Hours after the Senate Intelligence Committee said it had no evidence to back up President Trump’s claim of being wiretapped last year, the White House lashed out at the media Thursday, alleging a double standard in press coverage of the issue.
“They’re not findings,” White House press secretary Sean Spicer said of the Senate committee’s statement. “They have yet to go through the information.”
Mr. Spicer accused reporters of jumping on reports to discredit the president and ignoring developments that favor him. He pointed to comments by House Intelligence Committee Chairman Devin Nunes, who said it was “very possible” that Mr. Trump or his aides were caught up in government surveillance.
“You choose not to cover that part,” Mr. Spicer told a network TV reporter. “Where was your passion and where was your concern when they said there was no connection to Russia? Crickets from you guys. You continue to perpetuate a false narrative.”
Mr. Trump said on Twitter two weeks ago that he had just learned that President Obama wiretapped his campaign headquarters at Trump Tower in New York last year. He has provided no proof, but said Wednesday that the administration will show evidence of his claims within two weeks.
Mr. Spicer read a lengthy list of past news reports about possible surveillance of Trump officials.
“There’s a ton of media reports out there that indicate something was going on during the 2016 election,” he said.
Source>http://www.washingtontimes.com/news/2017/mar/16/white-house-slams-media-over-coverage-wiretapping-/
Posted by theodore miraldi at 7:34 PM