Aaron Hernandez HANGS Himself In Prison 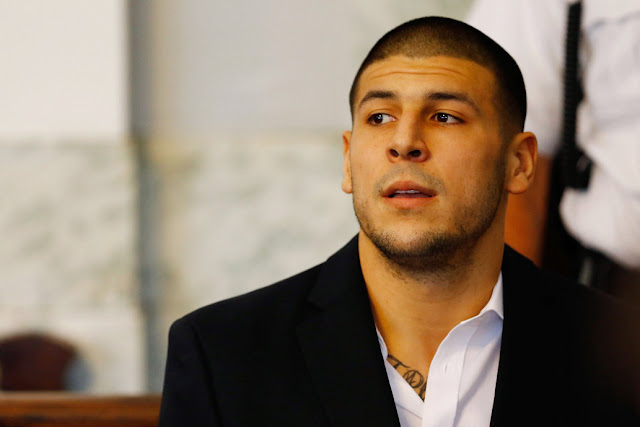 Yaron Steinbuch
Former New England Patriots star Aaron Hernandez, who was serving a life sentence for a 2013 murder, killed himself in prison early Wednesday, prison officials confirmed.
He was discovered hanged in his cell by corrections officers at the Souza-Baranowski Correctional Center in Shirley, Mass., about 3:05 a.m. Wednesday, corrections officials said.
“Mr. Hernandez was in a single cell in a general population unit,” a statement from the Department of Correction reads, the Boston Globe reported.
“Mr. Hernandez hanged himself utilizing a bedsheet that he attached to his cell window. Mr. Hernandez also attempted to block his door from the inside by jamming the door with various items.”
Lifesaving measures were attempted on the 27-year-old, who was taken to UMass Memorial-HealthAlliance Hospital in Leominster, where he was pronounced dead an hour later, officials said in a statement.
He was not on suicide watch because there had been no indications he planned on hurting himself, DOC spokesman Christopher Fallon told The Globe.
“If he had made any kind of statement, he would have not been in that unit,” Fallon said, adding that investigators have not found anything resembling a suicide note in his Unit G-2 cell.
Hernandez was serving life without parole after being convicted in 2015 of killing of Odin Lloyd, a semi-pro football player who was dating the sister of his fiancee.
Prosecutors said last week there was no chance Hernandez would ever be a free man again.
The former tight end’s suicide comes five days after he was acquitted in a 2012 double slaying prosecutors said was fueled by his anger over a spilled drink.
The jury found him not guilty of first-degree murder in the killings of Daniel de Abreu and Safiro Furtado – but convicted him of unlawful possession of a gun.
The judge sentenced him to an additional four to five years in prison, separate from his existing life sentence, for that conviction.
Prosecutors said Hernandez opened fire on their car because he felt disrespected when one of the men bumped into him and spilled his drink at a Boston nightclub.
The defense team pointed the finger at Alexander Bradley, a close friend of Hernandez who was with him the night of the shootings.
Hernandez also was acquitted last week of shooting Bradley in the face months later to try to silence him as a witness.
Bradley claimed Hernandez became enraged after de Abreu bumped into him while dancing, spilling his drink. He said Hernandez later opened fire on the men’s car as they waited at a stoplight.
About six weeks after Furtado and de Abreu were killed, Hernandez signed a five-year, $40 million contract with the Patriots and went on to play another season before Lloyd was killed.
He was cut from the team shortly after he was arrested in Lloyd’s June 2013 killing. He was not charged in the 2012 killings until 2014.
Hernandez grew up in Bristol, Connecticut, and played for the Patriots from 2010 to 2012.
In his first trial, jurors deliberated for 36 hours over seven days before convicting him of murder. Jurors in the trial that concluded Friday deliberated for about 37 hours.
The Super Bowl-winning Patriots are scheduled to visit the White House on Wednesday.
Source>http://nypost.com/2017/04/19/aaron-hernandez-kills-himself-in-prison/
Posted by theodore miraldi at 7:47 AM