Resolving crises is a means to impose more government 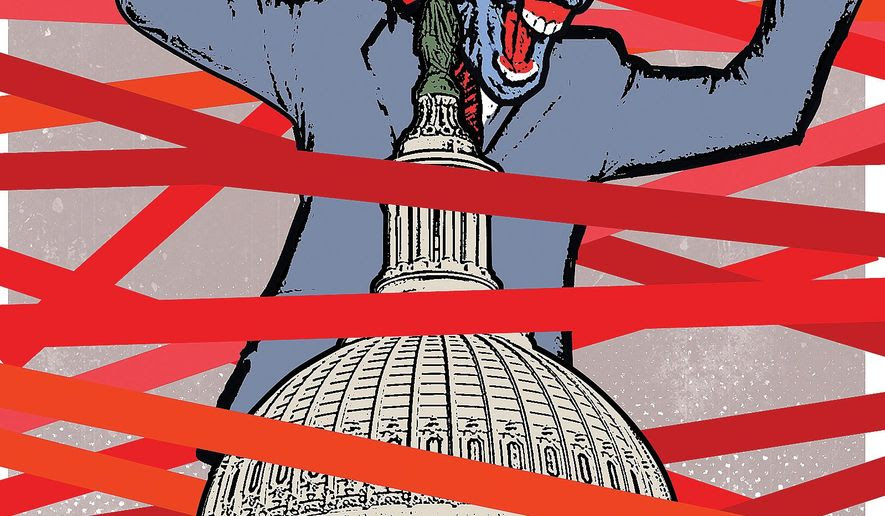 Illustration on progressivism and government by Linas Garsys

ANALYSIS/OPINION:
Shortly after the 2008 election, President Obama’s soon-to-be chief of staff, Rahm Emanuel, infamously declared, “You never let a serious crisis go to waste.”
He elaborated: “What I mean by that [is] it’s an opportunity to do things you think you could not do before.”
Disasters, such as the September 2008 financial crisis, were thus seen as opportunities. Out of the chaos, a shell-shocked public might at last be ready to accept more state regulation of the economy and far greater deficit spending. Indeed, the national debt doubled in the eight years following the 2008 crisis.
During the 2008 campaign, gas prices at one point averaged over $4 a gallon. Then-candidate Barack Obama reacted by pushing a green agenda — as if the cash-strapped but skeptical public could be pushed into alternative energy agendas.
Mr. Obama mocked then-Republican vice presidential candidate Sarah Palin’s prescient advice to “drill, baby, drill” — as if Mrs. Palin’s endorsement of new technologies such as fracking and horizontal drilling could never ensure consumers plentiful fuel.
Instead, in September 2008, Steven Chu, who would go on to become Mr. Obama’s secretary of energy, told The Wall Street Journal, “Somehow we have to figure out how to boost the price of gasoline to the levels in Europe.”
In other words, if gas prices were to reach $9 or $10 a gallon, angry Americans would at last be forced to seek alternatives to their gas-powered cars, such as taking the bus or using even higher-priced alternative fuels.
When up for re-election in 2012, Mr. Obama doubled down on his belief that gas was destined to get costlier: “And you know we can’t just drill our way to lower gas prices.”
Yet even as Mr. Obama spoke, U.S. frackers were upping the supply and reducing the cost of gas — despite efforts by the Obama administration to deny new oil drilling permits on federal lands.
U.S oil production roughly doubled from 2008 to 2015. And by 2017, the old bogeyman of “peak oil” production had been put to rest, as the United States became nearly self-sufficient in fossil fuel production.
Viewing the world in apocalyptic terms was also useful during the California drought.
In March 2016, even as the four-year drought was over and California precipitation had returned to normal, Gov. Jerry Brown was still harping on the connection between “climate change” and near-permanent drought.
“We are running out of time because it’s not raining,” Mr. Brown melodramatically warned. “This is a serious matter we’re experiencing in California, as kind of a foretaste.”
Foretaste to what, exactly?
In 2017, it rained and snowed even more than it had during a normal year of precipitation in 2016.
Currently, a drenched California’s challenge is not theoretical global warming, but the more mundane issue of long-neglected dam maintenance that threatens to undermine overfull reservoirs.
Mr. Brown had seen the drought as a means of achieving the aim of regimenting Californians to readjust their lifestyles in ways deemed environmentally correct. The state refused to begin work on new reservoirs, aqueducts and canals to be ready for the inevitable end of the drought, even though in some 120 years of accurate record keeping, California had likely never experienced more than a four-year continuous drought.
And it did not this time around, either.
Instead, state officials saw the drought as useful to implement permanent water rationing, to idle farm acreage, and to divert irrigation water to environmental agendas.
Well before this year’s full spring snowmelt, more than 50 million acre-feet of water has already cascaded out to sea (“liberated,” in green terms). The lost fresh water was greater than the capacity of all existing (and now nearly full) man-made reservoirs in the state, and its loss will make it harder to deal with the next inevitable drought.
No matter: Progressive narratives insisted that man-caused carbon releases prompted not only record heat and drought, but within a few subsequent months also record coolness and precipitation.
And in “Alice in Wonderland” fashion, just as drilling was supposedly no cure for oil shortages, building reservoirs was no remedy for water scarcity.
In the same manner, neglecting the maintenance and building of roads in California created a transportation crisis. Until recently, the preferred solution to the state’s road mayhem and gridlock wasn’t more freeway construction but instead high-speed rail — as if substandard streets and highways would force millions of frustrated drivers to use expensive state-owned mass transit.
These days, shortages of credit, water, oil or adequate roads are no longer seen as age-old challenges to a tragic human existence. Instead of overcoming them with courage, ingenuity, technology and scientific breakthroughs, they are seen as existential “teachable moments.”
In other words, crises are not all bad — if they lead the public to more progressive government.
Source>http://www.washingtontimes.com/news/2017/apr/19/liberals-seek-to-impose-more-government/
Posted by theodore miraldi at 7:19 AM