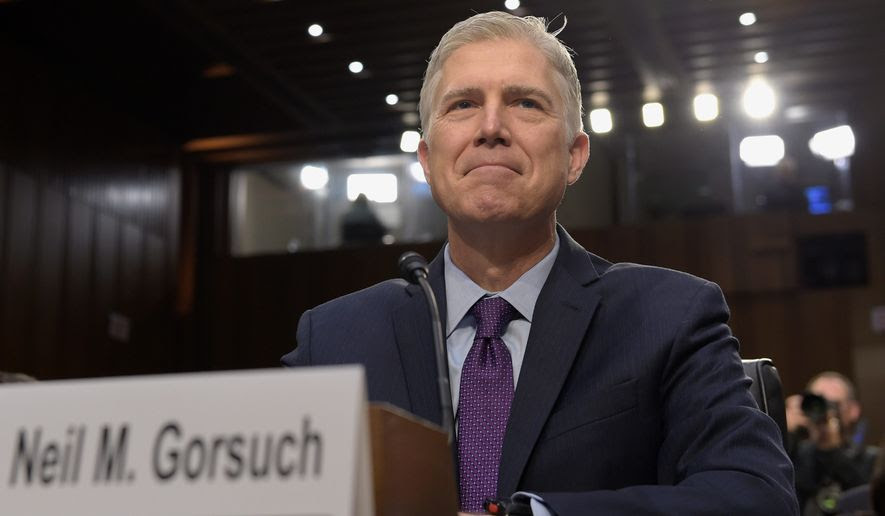 
With Judge Neil Gorsuch confirmed to the Supreme Court, President Trump will now turn his attention to the more than 120 vacancies in the rest of the federal judiciary, giving him an unparalleled chance to shape the American legal system.
Nineteen of those vacancies are at the appeals court level, where judges have an extraordinary ability to affect the contours of the law and decide which issues reach the Supreme Court. And more than 90 openings await Mr. Trump’s decision in district courts.
President Obama, by contrast, had just 44 district court vacancies and 13 appellate vacancies when he took office in 2009.
Conservatives are urging Mr. Trump to take the opportunity seriously, and Sen. Ted Cruz, Texas Republican, has called on the president to field an “army of young, principled constitutionalists” to fill the openings — “a generation of 30-something and 40-something Scalias and Thomases.”
“We need judges who are faithful to the Constitution, who will apply the law as it is written rather than legislating from the bench and who demonstrate judicial humility so that they will not try to impose their own policy preferences on the decisions of the democratically elected branches of government,” Mr. Cruz told The Washington Times.
The White House declined to comment on the record, but senators, who have the duty to vote on the judicial picks, said they are seeing signs Mr. Trump’s team is ramping up its efforts.
Last month, the president made his first pick, tapping U.S. District Judge Amul Thapar, who sits in Kentucky, to a seat on the 6th U.S. Circuit Court of Appeals.
The pick appears to be sitting well with conservatives.
“He’s a very solid intellectual and also [has a] reliably conservative judicial philosophy,” said Curt Levey, president of the Committee for Justice.
Carl Tobias, a law professor at the University of Richmond School of Law, thinks it’s unlikely that Mr. Trump will fill all of the vacancies by next year.
“I think there’s going to be a huge gold rush because people want to have their [choices] nominated first, and it just takes time,” Mr. Tobias said of the senators giving their input to the White House.
He said that the nominees go through an FBI check and an evaluation by the American Bar Association.
Democratic presidents have traditionally given more weight to the bar association’s rating than Republican presidents — though in the case of Judge Gorsuch, Mr. Trump’s Supreme Court pick, Democrats brushed aside his stellar rating in voting against him.
Mr. Cruz’s hope of an army of conservative judges could founder on the shoals of Senate tradition, where lawmakers are given an unusual amount of input on the nominations.
One hurdle is the “blue slip” process, in which senators are asked to review judicial nominees who are slated to take seats in their home states. If both senators from the state don’t return their blue slips, the nomination is usually put on hold.
Judiciary Chairman Chuck Grassley, Iowa Republican, told reporters Friday that although “there’s been some exception to the blue slip rule,” he generally intends to follow the tradition for Mr. Trump’s nominees.
Although a president isn’t legally obligated to seek advice from senators about his federal judicial nominations, more than a dozen senators told The Times that they have been in communication with the White House and are working to fill openings in their states.
“The degree of consultation, frankly, varies from senator to senator, from position to position,” Mr. Levey said. “There’s more deference on district court nominations than there would be on appeals court nominations.”
In Texas, Sen. John Cornyn and Mr. Cruz established a bipartisan panel of leading lawyers in their state to identify qualified candidates for the senators’ review.
Sen. Christopher A. Coons, Delaware Democrat, said he has had a “very constructive conversation about the path forward” with the administration about filling the one district court opening in his home state.
Sen. Cory Gardner, Colorado Republican, said they have been “proactively communicating” about Colorado’s vacancy.
“We’re very close to sending them over our list for the district court,” said Mr. Gardner.
Mr. Levey said Mr. Trump is on schedule for picking judicial nominees.
He said President George W. Bush announced his first 11 nominees in May during his first year. President Obama made his first judicial nomination — for only one judge — in March of his first year.
Mr. Levey said he expects the White House to announce more about the vacancies after Judge Gorsuch is sworn in Monday.
“Had you asked me to predict, I would have said they would have given it very little thought by now, and yet instead, they do seem to be working a lot on it, from everything I hear,” said Mr. Levey. “I’ve been pleasantly surprised.”
Source>http://www.washingtontimes.com/news/2017/apr/9/neil-gorsuch-confirmation-clears-donald-trump-to-r/
Posted by theodore miraldi at 6:59 AM