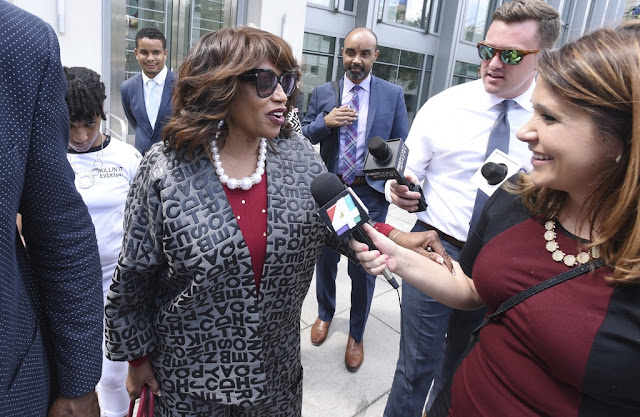 Smith argued that Simmons and Carla Wiley, the founder of the One Door charity who is also expected to testify against Brown, could not be trusted since they admitted to lying and stealing.
Assistant U.S. Attorney A. Tysen Duva said Simmons did Brown’s bidding, including taking $800 from the charity and depositing it into Brown’s account. But Smith said Brown was not computer savvy and could not look up account activity online and that it was all handled by Simmons.
One example Duva cited was when Brown and her daughter went to the Bahamas and stayed at the Atlantis Hotel before flying to Beverly Hills and shopping on Rodeo Drive. Duva said there was documentation of Simmons depositing money into the bank account on each of those days.
In its opening statement, the prosecution questioned why Brown didn’t ask about the fluctuating balance in her account if she knew nothing about the cash being deposited.
Smith said Brown often traveled and spent money as part of her work as a congresswoman and filed a reimbursement claim with the government, First Coast News reported. Smith said Brown would not have noticed Simmons’ deposits since her account balance was always fluctuating.
Source>http://www.rollcall.com/news/politics/corrine-brown-trial-begins#sthash.Eqow5p5t.dpuf
Posted by theodore miraldi at 11:04 AM