Democrats RACE to the GUTTER? 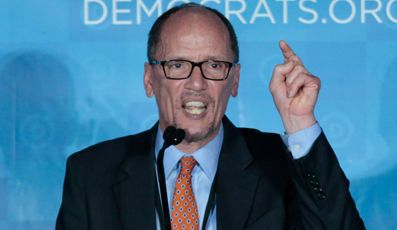 After a grueling, trash-talking 2016 election, the new leader of the Democratic National Committee hasn’t exactly taken great pains to raise the level of political discourse in America.
Tom Perez’s latest attack on Republicans is: they “don’t give a sh-t” about voters.
The DNC chairman unloaded on the GOP at a rally on Monday in Maine, after leveling the same attack weeks earlier in New Jersey. Analysts say it’s part of a strategy to rev up the Democratic base. But, after then-candidate Donald Trump was slammed last year for casting off civility in politics – with profanity-laced speeches and an insult-driven debate style – Perez’s rhetoric could be taking his party down the same path in spite of calls for a more unifying message after their 2016 drubbing.

Expand / Contract
The Democratic National Committee has a coarse new battle cry. (DNC website)
“Republican leaders and President Trump don't give a sh-t about the people they were trying to hurt,” Perez, an Obama administration labor secretary, said Monday in Maine about the GOP’s plan to replace ObamaCare, known formally as the Affordable Care Act.
Though Perez was blasted for similar comments in New Jersey, he and fellow Democrats have apparently turned the blistering talking point into a populist battle cry.
The Democratic Party’s official store is selling a “Democrats Give a Sh-t about People” T-shirt, for $30 apiece.
“I totally get what Perez is doing,” Jennifer Victor, a politics professor at Virginia’s George Mason University, said Wednesday. “His job is to energize the base with anger or whatever else it might take because Democrats are the down-and-out party. And he’s not facing the strategic dilemma of, say, a senator who might compromise every once in a while. But it’s definitely not civil.”
During the hard-fought DNC leadership race, Perez was cast as the more moderate choice, in a contest against Rep. Keith Ellison, D-Minn.
Rob Carter, a member of the Maryland Republican Party, said electing the former local Maryland official to lead the beleaguered DNC still marked a “seismic shift to the left” that ignored Democrats’ pleas to appeal more to middle America.
“Talk about not understanding your voters, the selection of Tom Perez was ironic at best,” he said.
“Perez is doing everything he can to move past Democrats’ historically poor recent election cycles and make voters forget how little they cared about the average American,” Republican strategist Joe Desilets told Fox News. “That’s evident in the burdensome ObamaCare legislation they passed and that has been progressing down the path to failure for years now.”
For decades, Democrats and Republicans have called for more civility in politics, with little success as they point fingers and attempt to claim the higher ground.
In fact, a civility pledge sent in 2010 to every member of Congress and U.S. governor -- 585 total lawmakers -- was signed by just one senator and two House members.
The Civility Project, the bipartisan group that sent the pledge, disbanded a year later.
“This political divide has become so sharp that everything is black and white, and too many conservatives can see no redeeming value in any liberal or Democrat,” Republican co-founder Mark DeMoss later told The New York Times. “That would probably be true about some liberals going the other direction, but I didn’t hear from them.”
DeMoss did not return a call requesting comment for this story. A DNC representative also did not immediately return a request for comment.
Trump showed little interest in maintaining political decorum during the 2016 presidential campaign, with comments about “stupid” U.S. leaders and threats about “bombing the sh-t out of ISIS.”
He promised in February 2016 to never again use foul language. Then a 2005 videotape made public just weeks before Election Day showed Trump making lewd comments about women and nearly tanked his campaign.
Two days before the election, Trump tried to retake the high ground, criticizing rap impresario Jay-Z for using vulgar and racially charged language at a Hillary Clinton rally.
“Can you imagine if I just said that,” Trump said at rally in Florida. “He used every word in the book. I never said what he said in my life. But that shows you the phoniness of politics.”
Source>http://www.foxnews.com/politics/2017/04/20/dems-new-message-republicans-don-t-give-sh-t.html

Posted by theodore miraldi at 12:52 PM