Who said that Politics isn't a Crooked Business and has NO Perks...tmiraldi 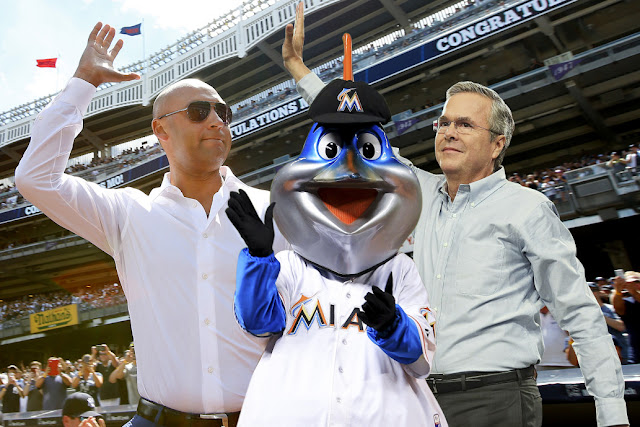 Derek Jeter’s always been a winner.
The ownership group led by the Yankees legend and former presidential candidate Jeb Bush has won the auction to purchase the Miami Marlins, Bloomberg reported Tuesday.
The group has agreed to pay $1.3 billion for the team, according to the Miami Herald, which said Bush will have ultimate control of the franchise, while Jeter will take a more active role.
Earlier Tuesday, Forbes reported the Jeter-Bush group was the last one standing and was frantically trying to complete the financing arrangements. The Herald later portrayed the Marlins, being sold by Jeffrey Loria, who has owned the team since 2002, as “very optimistic” the deal would go through — though the transaction could take months to complete.
Other bidders for the Marlins, such as investors Tagg Romney (Mitt Romney’s son) and Wayne Rothbaum, recently had dropped out of the running.
When the deal is finalized — 75 percent of MLB owners will need to approve of the ownership change — Jeter, 42, moves quickly from his retirement from baseball following the 2014 season to his next primary ambition: owning a team.
Jeter made his goal of MLB ownership clear last November when asked whether he would return to the Yankees as a guest instructor at spring training, as so many other pinstriped greats have done.
“My aspirations are a little bigger, in terms of the ownership side of things,” Jeter said.
He also discussed how he felt he had benefited from taking a multi-year hiatus from baseball to concentrate on other business ventures.
“I needed time away from the game,” Jeter said. “You spend that much time doing something, you need to get away and focus on some other things.”
Source>http://nypost.com/2017/04/25/derek-jeter-is-buying-the-miami-marlins/
Posted by theodore miraldi at 5:14 PM