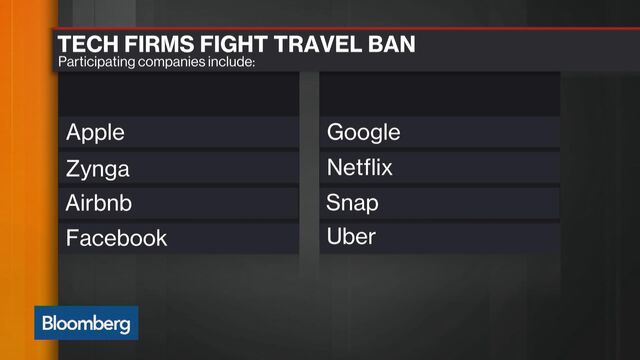 Josh Eidelson
*Service vendors reminded that subcontractors have rights, too
*A workplace ‘where employees feel comfortable speaking up’
Facebook Inc. said it won’t punish employees who take time off to join pro-immigrant protests on May 1. And, in a nod to security staff, janitors, shuttle-bus drivers and others who work for Facebook contractors on campus, the company also said it will investigate if any of its vendors illegally crack down on their employees’ protest rights.
“At Facebook, we’re committed to fostering an inclusive workplace where employees feel comfortable expressing their opinions and speaking up,” a spokesman wrote in an emailed statement. “We support our people in recognizing International Workers’ Day and other efforts to raise awareness for safe and equitable employment conditions.”
Facebook notified employees of its policy in a posting on an internal forum April 14. A spokesman said it applies regardless of whether workers notify the company ahead of time. The Menlo Park, California, company also said it would re-evaluate its ties to any vendor if it breaks the law that protects workers’ rights to organize and protect themselves.
“It’s important not just to the engineers and H-1B holders that are traditionally thought of as the immigrants in tech but also to folks who are subcontracted but work side-by-side on those campuses,” said Derecka Mehrens, co-founder of Silicon Valley Rising, a union-backed coalition. “Immigrants play a critical role in the tech sector -- both as engineers and coders but also in keeping tech campuses running smoothly.”
Many tech companies have been vocal in their opposition to aspects of Trump’s agenda. Facebook has criticized Trump’s immigration moves. At a rally in January at Google’s headquarters in Mountain View, California, CEO Sundar Pichai and co-founder Sergey Brin spoke against Trump’s executive order that closed U.S. borders to people from several majority-Muslim nations. Both companies, along with Apple Inc., Microsoft Corp. and Intel Corp., are among more than 120 firms that signed a February court filing opposing the travel ban.
Activists have been pushing for more. On March 29, employee delegations spearheaded by Silicon Valley Rising visited 20 tech firms, including Facebook, to ask them to show support for immigrant workers and to promise that there would be no retaliation against employees who protested on May 1. They also visited Google sites in seven cities last week to make the same demand.
Next month’s worker walkouts and rallies, which organizers pledge will draw massive participation, are among an array of efforts to take on the new administration using workplace power and pressure on management.
“Our members are pushing us to be part of this resistance in a bolder way than ever,” said Denise Solis, vice president of United Service Workers West, a California-based affiliate of the Service Employee International Union that represents 40,000 janitors, security officers and other workers. Among the goals, she said, is “sending a message to employers that this is not the time for them to take advantage of this situation and act irresponsibly” toward their immigrant workforce.
Employers across industries are in a tricky position, said Peter Cappelli, a management professor who directs the Center for Human Resources at the University of Pennsylvania’s business school. They’re navigating conflicting concerns, including the need to compete for liberal employees and customers, and the desire to secure pro-business policy changes and lucrative government contracts. CEOs of companies like Uber Technologies Inc., Walt Disney Co. and IBM joined Trump’s business advisory council, only to find themselves the targetsof protests, including from their own staff.
“They are making calculated economic decisions based on their stakeholders,” said Cappelli, and not many will opt to aggressively antagonize the president. “For the most part, they’re going to duck it.”
Facebook has already weathered scrutiny from all sides. Conservatives accused it of a liberal bias in its News Feed. Liberals criticized CEO Mark Zuckerberg for keeping Trump supporter Peter Thiel on the board, which Zuckerberg has defended.
Source>https://www.bloomberg.com/news/articles/2017-04-18/facebook-gives-staff-green-light-to-protest-trump-on-may-1
Posted by theodore miraldi at 10:20 AM