The source of health care’s recent travails is Washington itself 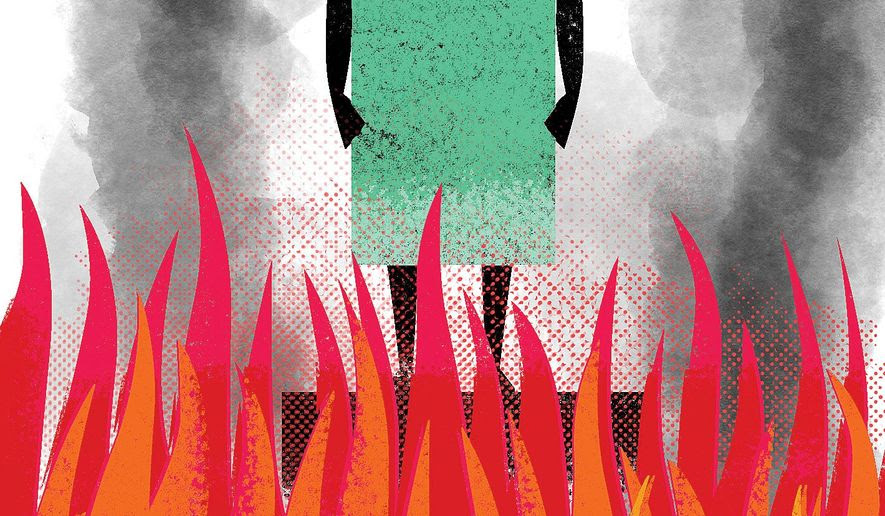 Illustration on the healthcare provider/insurance crisis by Linas Garsys


ANALYSIS/OPINION:
There are two ways to achieve success. The best way is to make the right choice. A second way is to avoid the wrong choice. Washington avoided disaster by withdrawing the hastily constructed, ill-conceived American Health Care Act (AHCA).
One pundit explained away this Republican political setback writing, “Obamacare is more popular than the GOP alternative.” Some will sit back and watch America’s favorite spectator blood-sport, the blame game. Or, we might learn the right lesson, make the right choice, and actually fix our collapsing health care system.
U.S. health care has been failing for decades: it is a platform on fire. Early attempts by Washington to put the fire out — EMTALA (Emergency Medical Transport and Labor Act), UMRA (Unfunded Mandates Reform Act), HIPAA (Health Insurance Portability and Accountability Act), SGR (Sustained Growth Ratio) — only made the flames go higher. Obamacare poured gasoline on the platform. AHCA would have been a further accelerant.
It is time to listen to management gurus and make the right choice. “When you’re standing on a burning platform, get off it!”
The burning platform that is consuming health care is not made of venal insurance executives, uncaring doctors, or gouging pharmaceutical companies. The burning platform is federal control — Washington itself.
Mandated insurance packages, standardized eligibility, unresponsive payment schemes, and government practicing medicine are ways the federal government dictates where taxpayer dollars go instead of where they should go: to pay for care.
The real lesson from the demise of AHCA is that any answer for health care emanating from Washington is doomed to failure. We need a non-Washington solution, one that starts with full repeal of Obamacare and continues by repealing other federal healthcare mandates.
A “non-Washington” health care system means that the states decide what healthcare system works for its residents. If California thinks single payer system is best, give the Golden State a block grant for health care and let them build the system they want. If Texas wants a free market, give them their block grant, and step aside.
The health care needs of individuals in California’s Imperial Valley are quite different from what people need on the Texas Panhandle. State governments are much more attuned to the diverse in medical needs of their people, much more effective in allocating scarce resources, and much more responsive to its citizens than the federal government.
Care across state borders could easily be part of interstate compacts, especially if the federal government allows insurance companies to sell across state lines.
Costs will plummet when the federal health care bureaucracy is out of the picture. Insurers such as Aetna, Anthem, Humana, and UnitedHealth will re-enter the market. Without federal mandates, they can compete successfully and sell policies we want. The prices will fall further.
As a direct result of Obamacare’s insurance mandates, annual health care costs for a family of four have reached $25,826 a year. This is slightly less than half of all that family’s income. When relieved of the cost of bureaucracy and with insurers competing, insurance costs will certainly also fall, probably to less than $10,000.
Using a stick — Obamacare’s penalty tax — to get “young invincibles” to purchase insurance hasn’t worked. The carrot works better: let the free market drive the cost down to where the young and healthy see insurance as both affordable and valuable.
Unlike Washington, states cannot print money. State spending on health care cannot add to a national debt, that has doubled to $19 trillion with Obamacare in place. In fact, the Obama administration established a new and unenviable record. For the first time in U.S. history starting in 2012 and continuing to date, our national debt is greater than U.S. GDP. Before President Obama, GDP was 35 percent greater than national debt.
People tend to focus on insurance coverage when discussing health care. They lose sight of the reason for having a system: care. It may sound like a wonderful achievement that 16.9 million Americans gained insurance who did not have it before. The vast majority, some say as much as 97 percent, occurred through Medicaid expansion. Unfortunately, while more people were insured, access to care went down. Almost half (47 percent) of U.S. physicians can no longer afford to see new Medicaid patients. Wait time to see a family practitioner in Albany is now averaging more than four months.
Health care is standing on a burning platform. The platform is named Washington. It is time to get off. Whether you call the solution StatesCare, Fifty Plan, or simply states’ rights healthcare, Washington needs to withdraw from health care and let the states take over. Then, we can get the care we need, when and when we need it, for a price we can all afford.
• Deane Waldman, a physician, is the director of the Center for Health Care Policy at the Texas Public Policy Foundation. He is the author of “The Cancer in the American Healthcare System” (Sbpra, 2015).
Source>http://www.washingtontimes.com/news/2017/apr/9/health-care-fix-under-trump-still-not-a-perfect-id/
Posted by theodore miraldi at 7:17 AM