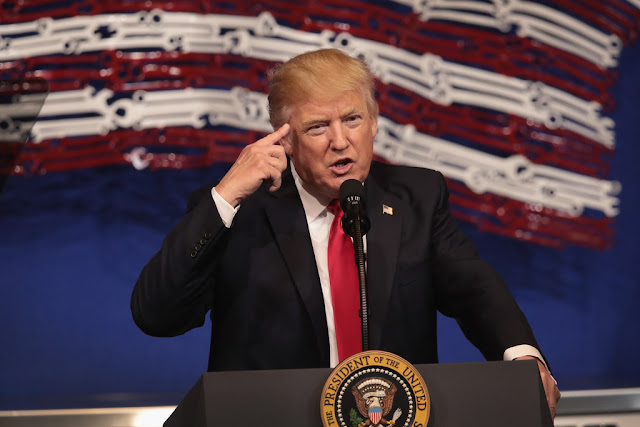 Forget the fake news folderol about another shutdown showdown at the end of next week, because just over the horizon looms the year’s really big fiscal morass.
It’s highly likely that the first order of business when Congress comes back, keeping the bureaucracy humming for just five months, will prove to be the policymaking equivalent of an empty net goal.
But the budget game gets a whole lot tougher immediately afterward — so difficult that the only path to victory will get paved with that rarest of phenomena in today’s capital: a genuine, multi-billion-dollar bipartisan compromise.

Time is of the essence. Once the unfinished midyear appropriations matter is put to rest, the factionalized congressional Republicans will have no excuse for procrastinating and must start addressing President Donald Trump’s provocative spending priorities for his first full year in office.
Hill Democrats will delight in stoking public antagonism to those plans but will quickly be exposed as having no leverage to alter them.
And until another round of tightened appropriations caps gets relaxed with a bipartisan handshake, those rules will stand in the way of any consideration Washington may give to spending its way out of even a smidgen of all the conflict.
On top of all that, the debate will get started during a spring and summer when Trump and the Hill majorities probably won’t be in a position to advance any other headline-making pieces of legislation — so, for better or worse, the Republicans’ ability to meet their fiscal challenge will command a disproportionate share of attention paid to life inside the Beltway.
The sooner they secure their lifeline from the Democrats, the better their chance to fill an otherwise stunning vacuum for the first year of a new president working with a like-minded Congress.
This is because the magic formula for replacing the 2010 health care law is only marginally less elusive than when the bill imploded last month, meaning a breakthrough in the coming weeks is highly unlikely. And, even under the most optimistic circumstances, a long-shot deal on the biggest overhaul of the tax code in three decades won’t materialize before fall. And Trump’s aspiration for $1 billion in infrastructure investment, which disinterests many in his own party, may stay in limbo even if  both health care and taxes are disposed of.

The void in the legislative to-do roster is both an opportunity and a risk for those who want to resurrect the lost art of fiscal deal-making, or, at a minimum, return a sense of normalcy to the annual fiscal calendar.
For two decades, the appropriations process has been pockmarked by a steady string of busted deadlines, stopgap continuing resolutions and cataclysmic arguments about tangential policy matters and relatively tiny shifts in spending, which end up getting patched over at the final hour in a belated behemoth of a money bill.
The broken system has given neither party, nor any recent president, a lasting victory in bending the size and shape of the government, but it has denied federal agencies the sort of certainty they rightly crave for planning programs that could make better use of taxpayer dollars for longer than the stretch of a several-month CR.
Even a one-year fix on that front would allow Trump and the GOP leadership to tamp down questions about their governing competence, political common sense and internal ideological strife. But, of course, another year of budgetary gridlock would have at least as much of the opposite effect.
To be sure, in the coming days, the voters really should be able to count on the president and his party on the Hill working together at least this one time, mutually supporting a decision to avoid the temptation to concoct a crisis where none needs to exist. They all must realize how, in this newly unified government, they would face enormous public outrage and unilateral blame if there’s a budget impasse so early in their watch.
So perhaps after some minimal posturing this weekend, once Congress reconvenes the White House and Hill majorities will eschew all of their genuinely provocative demands, the Democrats will get out of the way and a relatively straightforward spending package will start moving toward enactment — albeit covering only the final five months of the current fiscal year. There may have to be a brief extension beyond April 28, when the current stopgap authority most agencies have to spend money will expire, but by early next month, they will finish last year’s long-overdue business.

After that, it will be crickets on the budget debate for fiscal 2018, which starts in October, unless Trump and the Hill’s majority leaders move relatively quickly to secure some serious help from the Democrats.
And that cooperation could come at a high price — not only politically, because the political bases in each party will blanch at having to find common ground with the other side, but also monetarily, because any such deal will necessarily be greased with billions of dollars in federal spending.
The issue is embodied in a 13-digit number, the single most important figure in whatever budget Congress settles on for the coming year, representing the maximum grand total for all regular appropriated spending, on programs subject to lawmakers’ annual discretion.
One such integer, $1.065 trillion, is dictated by a law enacted four years ago to extract Washington from an earlier fabricated fiscal crisis, a bipartisan deal in which Congress gave itself some relief from spending restraints in the short term by promising to tighten its belt later on.
But, as a matter of realpolitik, every serious player in the budget debate understands there’s nothing close to House or Senate majorities for such a diet. (The amount would be a fraction less than what’s going to get appropriated for this year.)
Trump’s opening negotiating position is to keep the cap while changing the spending mixture underneath. While the laws says 52 percent of the total should got to national defense, with every other program divvying up the rest, the president would give $54 billion more to the military by taking it from the domestic side, changing those shares of the budget pie to 57 percent and 43 percent.
That’s also a nonstarter. While some defense hawks dismiss such a boost as inadequate in this time of global tension, plenty of Republicans have joined Democrats in disparaging such an aggressive poach into the butter supply to pay for more guns. Plus, polling shows it’s a solidly unpopular idea.

The way out is to settle on increases for both defense and nondefense programs that enough conservatives perceive as tolerably meager while at the same time enough liberals are willing to accept as minimally sufficient.
Taking Trump’s $54 billion plus-up request only for defense, for example, and instead allowing military and nonmilitary programs to split such an additional amount would yield a 5 percent overall increase in discretionary spending — for a new total of $1.119 trillion.
A more generous option is hiding in plain sight. The original set of spending caps for this decade, created in 2011 as part of trade-off for congressional GOP willingness to avoid a default, set a $1.156 trillion limit for fiscal 2018 appropriations — $91 billion, or 9 percent, more than what the law currently dictates. Returning to that number would allow Trump to realize the Pentagon boost he wants while also providing more than inflationary increases for many other programs across the governmental array
Such bold abandonment of the current budget shackles will occur only if the House Freedom Caucus and its combative conservative affiliates in the Senate get flatly ignored, and Trump works to engineer the first big deal of his presidency with the backing of the leadership and the centrists on both his side and the other side. (The last agreement to ease spending strictures, in 2013, passed with the backing of 64 percent of Republicans and 87 percent of Democrats.)
But if something similar can be realized again, especially before Memorial Day, then Congress could spend all summer advancing the dozen regular appropriations bills that were once so anodyne but now stand as legislative unicorns.
Accomplishing only that much would hardly be historic, but at least an electorate craving some normalcy and productivity at the Capitol would see Trump and Congress appear to be at least capable of putting the government back in good working order.
Source>http://www.rollcall.com/news/hawkings/donald-trump-budget-republicans-congress#sthash.ZiwP55Ih.dpuf
Posted by theodore miraldi at 7:31 AM