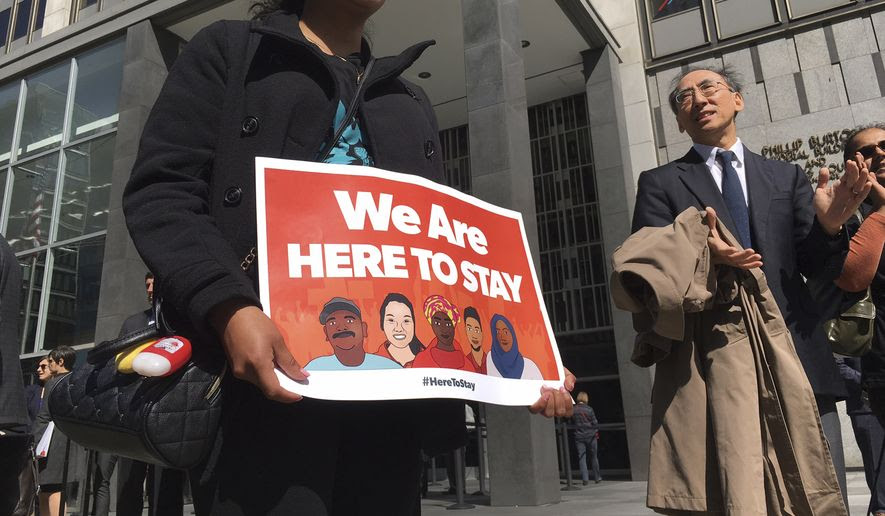 A massive anti-deportation infrastructure has emerged to try to protect illegal immigrants from President Trump’s crackdown, with advocacy groups coaching potential deportees on how to massage encounters with police, and lawyers and judges working to shield them from charges that would make them priorities for deportation.

A video released Monday by a coalition of advocates instructs illegal immigrants not to open the door to federal agents, what proof to demand if they are being arrested and what to say if accosted outside their homes.
Meanwhile, attorneys are working to lower charges from some illegal immigrant criminals, hoping to blunt their crimes so they don’t show up as high-priority deportation targets.
The latest instance was in California, where an immigrant from India was accused of abusing his wife. The Santa Clara prosecutor told The Daily Beast that he reduced a felony assault charge to a felony accessory after the fact charge in order to spare the man a sentence that would have made him a deportation risk.
Attorney General Jeff Sessions lashed out at the prosecutor last week, calling his action a perversion of the criminal justice system.
“Think about the message that sends: If you are an alien and you commit domestic violence, prosecutors will charge you with a lesser crime so you can stay in the country,” said Mr. Sessions, calling for an end to the practice. “Enough is enough.”
Even when prosecutors aren’t cooperating, defense attorneys have come up with guidance for trying to plead down charges or make alternative pleas that will keep major convictions off their records. One piece of advice from the National Lawyers Guild is to agree to pleas for two lesser misdemeanors from the same incident rather than admit to a single more serious misdemeanor that would make an illegal immigrant ineligible for special consideration.
“This is absurd,” said Jessica Vaughan, policy studies director at the Center for Immigration Studies. “The possibility of immigration consequences should not affect someone’s sentencing or the consequences they face.”
The desire to thwart deportations has grown in the months since Mr. Trump won the presidency, vowing to enforce immigration laws as written.
But even under President Obama, who took a far more lenient approach, activists were searching for ways to game the system to aid illegal immigrants.
One tactic universities used was to schedule overseas trips for illegal immigrant students who had been approved under Mr. Obama’s 2012 deportation amnesty, the Deferred Action for Childhood Arrivals program, or DACA. Under a provision of immigration law, permission to travel outside the U.S. for approved reasons can earn students advance parole, meaning that immigrants could get a shortcut to a path to citizenship upon their return.
Public institutions in California were particularly eager to put that to use for DACA students. Ms. Vaughan pointed to one Chicano studies professor at California State University, Long Beach, who took dozens of students to Mexico for school trips, giving them the pretext that they needed to earn advance parole.
Ms. Vaughan said the desire to thwart immigration law has become epidemic.
“They just don’t believe that immigration enforcement is legitimate or a worthy goal,” she said. “They’ve romanticized illegal immigration and have come to believe that illegal immigrants need to be protected from our laws. They’ve lost sight of the fact that immigration laws protect Americans.”
The activists counter that illegal immigrants have rights under the U.S. Constitution and that those rights need to be respected. Knowledge of those rights needs to be reinforced, activists say.
The video released Monday was aimed at children of illegal immigrants who are hoping the youngsters would help educate the adults on their options.
“If they come here, to the house, don’t open the doors. ‘No abran las puertas,’” the Informed Immigrant coalition said in its seven-minute training video.
U.S. Immigration and Customs Enforcement officers said they are already seeing far fewer people willing to open doors to them as warnings take hold.
The video does warn illegal immigrants against driving if they don’t have a license, urges them not to carry false papers and repeatedly cautions against attempting to flee authorities.
But it does offer strategies for encounters. If illegal immigrants have children who are U.S. citizens, they are encouraged to mention them in the hope that it would sway agents to leave the family alone.
Those who have children in the country illegally are advised not to mention them. Otherwise, the video says, the children could become targets for deportation.
“Don’t carry papers from another country with you, such as a foreign passport. Such papers could be used against you in the deportation process,” the video says.
ICE officers usually carry administrative warrants authorizing arrests for deportation purposes. They are not criminal warrants signed by a judge, and the video says they do not carry the same force of law — so illegal immigrants do not have to let officers inside or even open the door for them.
Source>http://www.washingtontimes.com/news/2017/apr/24/illegal-immigrants-coached-on-deportation-protecti/
Posted by theodore miraldi at 7:53 AM