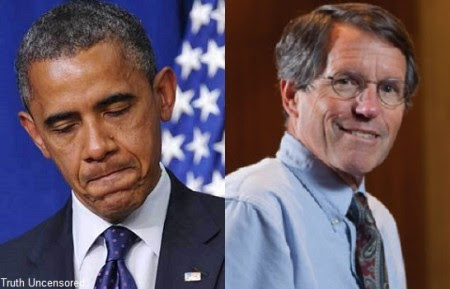 
The judge who struck down a Trump administration crackdown on sanctuary cities is a hard-core Democrat activist whose life has been steeped in liberal politics since childhood.
Judge William Orrick III, 63, who on Tuesday blocked the administration from withholding federal funds from cities that don't cooperate with federal immigration officials, attended the landmark 1968 Democratic National Convention as a teen and more recently raised money for 2004 presidential candidate John Kerry.
“I will not let my personal views interfere with the administration of justice," Orrick assured lawmakers in 2013, when he was confirmed as a federal judge on the District of Northern California. "I have never let my political beliefs affect my legal judgment, and believe that politics have no place in the courtroom.”
On Tuesday, in a suit brought by San Francisco and Santa Clara, Calif., Orrick blocked President Trump's executive order withholding funding from sanctuary cities, saying the president lacked the authority to attach new conditions to federal spending.

“He’s definitely one of the more openly liberal leaning judges on the bench based on several rulings he’s made over the years."
- Attorney who has argued cases before Orrick

But Orrick's latest ruling, which Trump blasted as a case of "judge shopping" in a Wednesday tweet, and a prior ruling granting Planned Parenthood an injunction barring the Center for Medical Progress from releasing damning undercover videotapes of the abortion provider's employees and contractors, have raised questions about his impartiality.
“He’s definitely one of the more openly liberal-leaning judges on the bench based on several rulings he’s made over the years," said one California lawyer who has argued cases before Orrick and requested anonymity. "Many of our [9th Circuit] judges are Democratic appointees, and with most of them you feel like you would get a fair shake.

Expand / Contract
Judge William Orrick is a longtime Democratic activist.(US District Court for the District of Northern California)
"Judge Orrick is one of the ones I feel uncomfortable having a politically charged case in front of,” he added.
Orrick got one of his first tastes of hard-knuckle politics when he was just 15 years old.  He went with his father, a delegate for Robert Kennedy, who had been assassinated two months before, to the riotous 1968 Democratic Convention in Chicago.
“There was fighting going on inside” the convention, as well as outside, Orrick told the Recorder in a story about prominent left-wing bundlers in August 2004.
Orrick would go on to attend Yale and Boston College Law School.
At the time of the Recorder report, Orrick was a lawyer for a San Francisco firm with deep ties to Democratic politics. He had helped organize a nationwide effort dubbed "Lawyers for Kerry” and was credited with raising more than $1 million for Kerry in the San Francisco area alone.
When Kerry announced he would not seek his party’s nomination in January 2007, a core group of a dozen or so attorneys met at Orrick’s firm, San Francisco-based Coblentz, Patch, Duffy & Bass, and “effectively became 'Lawyers for Obama,'” according to the Recorder. The group “became this kind of built-in network of fundraisers,” attorney Thomas McInerney told the Recorder. Obama wasn’t even officially in the race yet.
As a bundler for Obama, Orrick raised at least $200,000 according to records obtained by the watchdog group Public Citizen. A bundler, according to Public Citizen, “plays an enormous role in determining the success of political campaigns and are apt to receive preferential treatment if their candidate wins.”
A few months after President Obama moved into the White House, Orrick told a reporter that he wanted a job in the new administration. “I contacted anybody I could think of to say: Let me serve.”
McInerney was quoted as saying, "He's not in it for glory. He's doing it because he really believes in Obama."
Orrick's first position was in the Civil Division of President Obama’s Department of Justice. Near the end of Obama's second term, he was appointed to his current post.
Other attorneys, also anonymously, have complained publicly about Orrick.  One commenter on the blog The Robing Room called Orrick a “social justice activist for whom the rule of law is a quaint, malleable notion of no import.”
The Robing Room is a nationwide database of judges that contains 100,000 state and federal reviews of judges. “Posters are attorneys, litigants and court personnel,” said Robing Room Vice President Nicholas Kaizer, an attorney in New York.
“The comments reflect the judge’s bias,” said Kaizer, who acknowledged he has no professional experience with Orrick, but analyzed the comments for Fox News. “The general flavor reflects a judge that values form over substance, is results-oriented, and somebody that directs litigation to a preordained, predetermined outcome. And that reflects a judge that is not well regarded by counsel.”
Kaizer believes comments on his site paint an accurate picture of Orrick.
“If there’s one or two critical comments it’s anomalous, but we’re seeing 4 or 5 or more," he said. "I think you can draw conclusions that what each individual reviewer is saying is accurate and it’s buttressed by the other reviewers.”
While Orrick's latest decision may earn him more detractors, it will likely also prompt others to agree with an earlier assessment by Sen. Barbara Boxer, D-Calif.
“William Orrick will be an outstanding addition to the Northern District bench," Boxer said after recommending him for his current post. "He brings a depth of legal experience in both the public and private sectors.”
Source>http://www.foxnews.com/politics/2017/04/26/sanctuary-cities-fight-judge-who-blocked-trump-order-democrat-activist.html
Posted by theodore miraldi at 5:28 PM