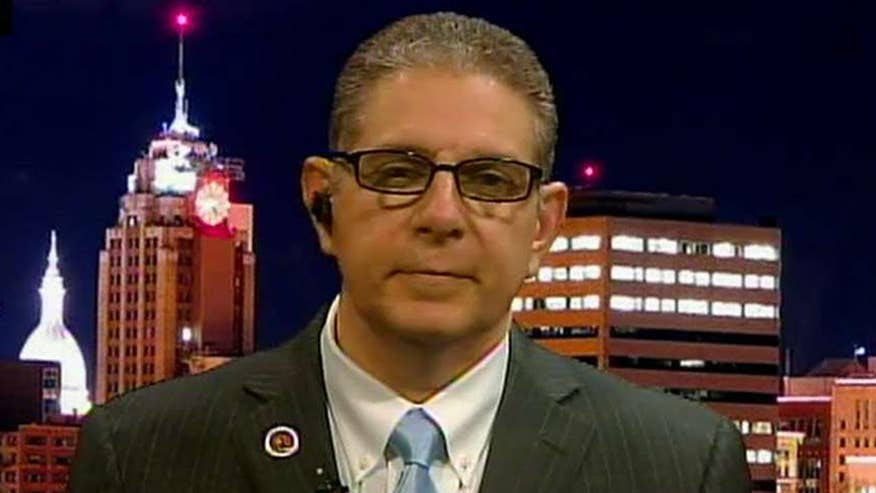 The city council in Lansing, Mich. voted Wednesday to rescind its decsion to deem itself a "sanctuary" city for illegal immigrants after concerns from the businesses that the status would draw unwelcome attention to the city.
The term "sanctuary city" generally refers to jurisdictions that do not cooperate with U.S. immigration officials. Under Lansing city policy, police don't ask for people's immigration status, except as required by U.S. or Michigan law or a court order.
Council members voted 5-2 to reverse last week's 6-0 vote to give the city "sanctuary" status. Immigration advocates in the crowd called called council members "spineless" and said "you're all losing your seats."
The dispute comes as several cities are battling President Donald Trump's promised crackdown on places that block cooperation between their police departments and U.S. immigration authorities. The Trump administration has warned that sanctuary cities could lose federal money for refusing to cooperate with immigration authorities.
After last week's vote, council members received a letter from the Lansing Regional Chamber and Michigan Chamber of Commerce urging them to remove references to "sanctuary city" from its resolution.
"Lansing is a diverse community, rich with history and culture. It's what makes our city a welcoming destination to live, work and thrive," the business groups' letter says. "Recent actions of City Council, whether intended or not, have placed an unnecessary target on the City of Lansing while jeopardizing millions of dollars in federal funding that impacts the city budget."
"The term 'sanctuary' in the resolution has become very problematic and distracting — so distracting in my opinion that's it's taken away from the intent of our resolution, which is to protect individuals," said Councilwoman Judi Brown Clarke. "It's basically a 'don't ask' policy, which was outlined by the mayor's executive order and what we had in our policy complements that."
That was already the policy in Lansing before last week's vote, but Lansing called itself a "welcoming city," rather than a "sanctuary city." Neither the welcoming city resolution nor the sanctuary city resolution called for Lansing to prohibit workers from providing information on a person's immigration status with U.S. immigration officials — a ban that's at the heart of some urban sanctuary cities disagreements with the Trump administration.
Mayor Virg Bernero has said he is confident Lansing's policies don't violate federal law, but "we are also prepared to take legal action to protect the prerogatives and powers of local government and local law enforcement."
Michigan Chamber President and CEO Richard Studley said the group's members want city officials "to stop wasting time on costly political statements and focus on real economic issues."
"I have no problem with the earlier resolution that affirmed the city's status as a welcoming city," Studley said. "The challenge is with the language declaring the city a 'sanctuary city' — adopted hastily with little debate. I think that it is easily misinterpreted or misunderstood."
The issue also has touched off debate in the Republican-controlled Michigan Legislature, which is considering banning local governments from enacting or enforcing rules that limit communication and cooperation with federal officials concerning people's immigration status. Similar legislation died in the last session.
Clarke believes that the term "sanctuary" could be getting in the way of helping constituents.
"I think ultimately what we learned is ... we thought we could define what 'sanctuary city' meant, and in actuality it has its own negative connotation," she said. "The only way to take that away is to take that word away."
The Associated Press contributed to this report.
Source>http://www.foxnews.com/us/2017/04/13/lansing-michigan-rescinds-sanctuary-status-after-criticism-from-businesses.html
Posted by theodore miraldi at 6:50 AM