No SANCTUARY from MURDER in Denver

An illegal released from custody shoots a citizen 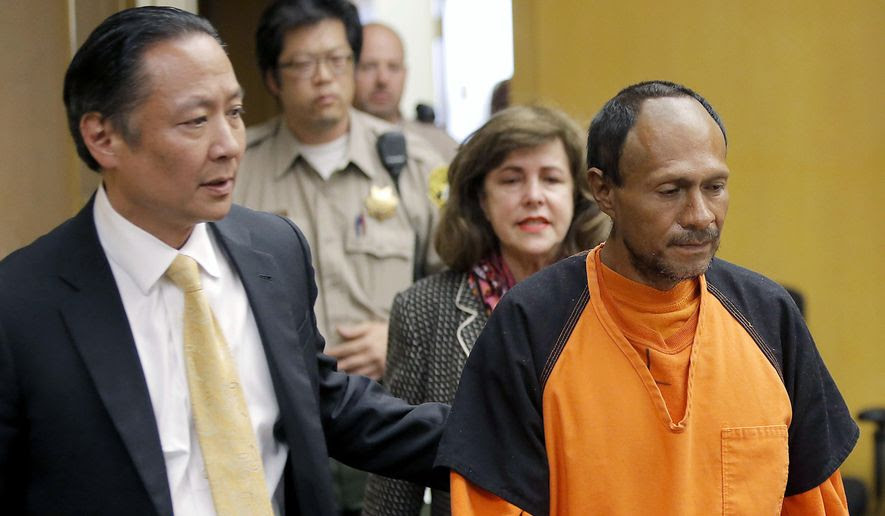 ANALYSIS/OPINION:
The smiling visage of Kathryn Steinle, tragically murdered while standing beside her father on a San Francisco pier, is well-known. Known nationally as well is that the illegal alien who shot her was a criminal with a long rap sheet, who had traveled illegally to the United States on multiple occasions, and had been arrested and repatriated to Mexico only to return to America to resume his criminal activity, including on that tragic day when he stole an unguarded weapon from a Bureau of Land Management agent and shot Ms. Steinle. All the while, he was protected by San Francisco’s elected officials and law enforcement authorities who proudly proclaim their city a “sanctuary” for illegal aliens.
Thirty-two-year-old Tim Cruz of Denver deserves to be known, remembered and mourned by America like Ms. Steinle, perhaps even more so given that he died a terrifying death, confronted by two ruthless, hooded and masked thugs who demanded his money, alone and without the comfort of loved ones. At 1 a.m., in the cold, dark hours of Feb. 7, while standing at Sheridan Avenue’s light-rail train station, 2.5 miles west of the Denver Broncos’ Mile High Stadium, Mr. Cruz was shot dead. Within days, the Denver authorities arrested the suspected killers. Then the local media made a shocking discovery: One of the suspects was an illegal alien who had been in custody in October but was released despite a request from federal authorities to be notified.
Immigration and Customs Enforcement (ICE) considered Ever Valles “an immigration enforcement priority” owing to his “criminal history” and because he is a “citizen of Mexico” and a “known gang member.” Moreover, ICE suspected Mr. Valles of being in the United States illegally. Thus, in October, when ICE learned that Mr. Valles had been arrested for car theft and other charges, it asked to be notified of any proposed release by Denver’s Sheriff. ICE said later it had not been informed when the suspect was released on Dec. 20; in fact, the Denver Sheriff had sent a fax to ICE at 11:33 p.m. — 27 minutes before midnight — which ICE said was received at 12:37 a.m. Mr. Valles was released at 11:59 p.m.
Denver issued a statement calling Mr. Cruz’s murder “a tragedy,” sent “its sincere condolences to his family and friends in this difficult time,” but blamed “the system,” arguing that the situation “painfully illustrate the difficult and separate responsibilities of local safety officials and federal immigration authorities.” After all, “We are part of the criminal justice system and do not hold people on civil matters.” Nonetheless, “Denver is focused on enacting policies and practices that protect people’s safety and their rights, including the rights of immigrants, while allowing federal authorities to focus on immigration enforcement that removes dangerous and violent felons from our streets.” Thus, Denver is committed to creating “a system where federal and local governments respect each other’s responsibilities and work together to close the gaps.”
What inaccurate, irresponsible and insulting nonsense. Denver is part of the “criminal justice system” but ICE handles “civil matters.” Really? Or how to explain Denver’s failure to provide more than 27 minutes’ notice before midnight to its brothers in blue? Should it be chalked up to just following orders, passive-aggressive behavior, or compliance in form but not in substance? Perhaps it is biblical — an example of Denver straining out a gnat and swallowing a camel. Or maybe it’s a cross-eyed reading of the Constitution that results in releasing a murderous gangbanger — not to ICE — but onto the street. I hope the city’s statement is not from the Denver sheriff and does not reflect his view or that of the Denver Police Department, but rather the suits who run the city and believe they will never find themselves — as those in law enforcement fear daily — staring at the wrong end of a gun held by someone foolishly released from custody.
On behalf of Mr. Cruz’s family, which is “livid” over the “senseless” death of a “unique, big-hearted” man, one can only hope that Denver is held accountable.
Source>http://www.washingtontimes.com/news/2017/apr/16/kathryn-steinle-murder-must-be-prosecuted-harshly/
Posted by theodore miraldi at 8:06 AM