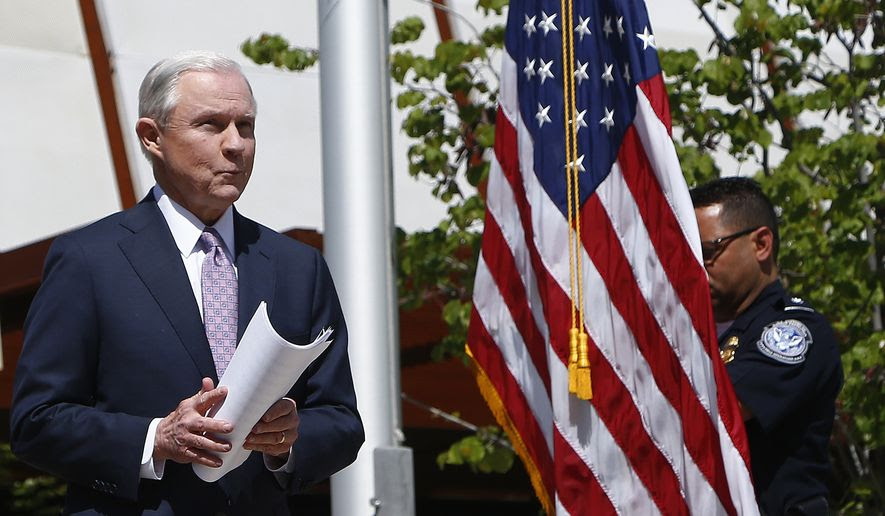 Conservative scholars have urged Attorney General Jeff Sessions to purge “ideological rot” that’s festered in the department’s Civil Rights Division under the Obama administration through internal reforms meant to reverse partisanship in the agency.
But liberal groups, seizing on a recommendation that political appointees rather than career bureaucrats play a role in the hiring process, argued this week that such a move would be a return to hiring practices already deemed improper and illegal under the George W. Bush administration.
The polarization over the issue underscores how much the division’s priorities can shift from one prevailing political wind to the next.
The 25 conservatives who authored the letter to the Justice Department urging reforms wrote that under the Obama administration, the Civil Rights Division “served purely ideological ends with rigidity unmatched in other federal offices.”
Among suggested reforms, they said the assistant attorneys general in each division “must preserve or reacquire hiring authority and not leave the decisions in the hands of career bureaucrats who are reliably opposed to President Trump’s agenda.”
For liberal groups, who already worry that their victories on policing, voting rights and LGBT issues will be rolled back under the Trump administration, the suggestion was alarming.
The Civil Rights Division “has the awesome responsibility of enforcing our nation’s civil rights laws, and ensuring equal treatment and equal justice under the law for all Americans,” the coalition of liberal groups including the American Civil Liberties Union, the Lawyers’ Committee for Civil Rights Under Law and the American Constitution Society for Law and Policy wrote this week. “For that reason, the Division’s career staff must not be politicized by the incoming Justice Department political appointees.”
Carolyn Frederickson, president of the American Constitution Society for Law and Policy, pointed to a highly critical 2008 watchdog report that found a political appointee under the George W. Bush administration had engaged in a partisan hiring campaign to bring conservatives into the Civil Rights Division.
“The impact on the civil rights division was palpable and negative,” she said, adding that work on voting rights and police oversight also dwindled during that time.
Discrimination against federal job applicants based on political affiliation is illegal. But “hiring people who share the policy views of the administration is something that can be appropriately considered,” said Roger Clegg of the Center for Equal Opportunity, one of the 25 conservatives who wrote to Mr. Sessions.
Qualified but conservative-leaning lawyers who applied for jobs in the Obama administration weren’t being given a fair shake, he said.
“We are a democracy and elections have consequences,” Mr. Clegg said. “When the people spoke and decided the administration should take a different tack, the American people have the right to see that translated into policy without career bureaucrats undermining it.”
A new administration trying to advance new policies shouldn’t have to worry about being sabotaged or undermined by career lawyers, he said.
Source>http://www.washingtontimes.com/news/2017/apr/12/jeff-sessions-urged-to-clean-out-obama-staff-from-/

Posted by theodore miraldi at 7:08 AM