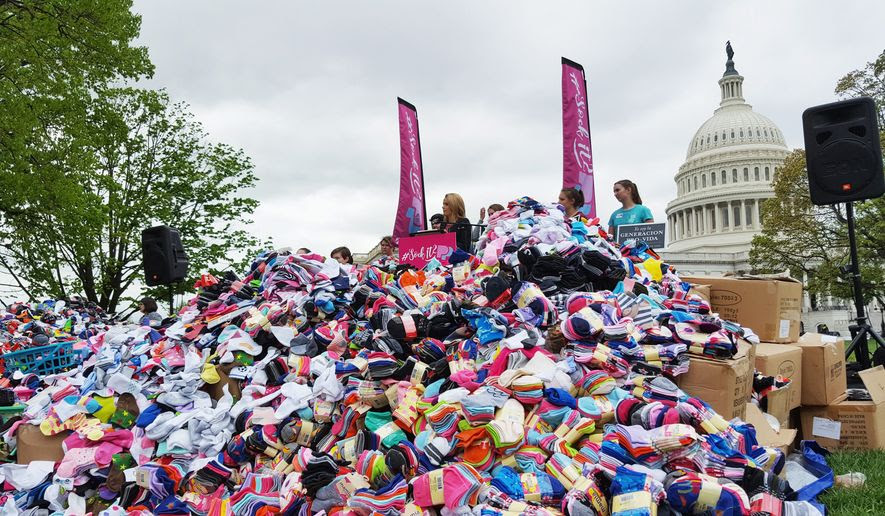 Brightly colored baby socks flooded the halls of the U.S. Capitol Wednesday, representing the hundreds of thousands of lives lost annually to Planned Parenthood, and sending the unmistakable message to Congress to defund the nation’s largest abortion provider.

Spearheaded by Students for Life of America, the SockIt2PP campaign collected 196,543 baby socks and plans to deliver a total of 323,299 to match the number of abortions Planned Parenthood performed last year.
“It’s a devastatingly large number,” said Sen. Ben Sasse, Nebraska Republican, standing on a podium above a giant mound of baby socks outside of the Capitol. “And we need to have images like this so that people start to reflect on the magnitude of suffering that’s happening out there.”
On Wednesday volunteers delivered 88,000 socks to members of Congress — the number of abortions Planned Parenthood has performed during the first 100 days of the new administration.
The demonstration comes in the midst of policy negotiations that will decide the fate of Planned Parenthood, which receives about $500 million in taxpayer funding every year to keep its doors open.
Before delivering the socks, pro-life activists, lawmakers and students held a rally on a Capitol Hill lawn. The baby socks were predominantly white, pink and blue. Others were patterned with soccer balls, polka dots and Batman logos.
Sue Thayer, a former Planned Parenthood center manager who is now a pro-life activist, said the baby socks were like something out of the U.S. Holocaust Memorial Museum down the street.
“There should be little feet in all of these socks,” Ms. Thayer said. “There should be little babies in all of these socks.”
The baby socks were sent in from students at hundreds of high school and college chapters of Students for Life and other pro-life organizations.
Purity Thomas, president of the Roanoke Students for Life, said it’s unthinkable that “we allow our tax dollars to go to the funding of an organization that murders innocent children daily.”
“This is an organization that kills our brothers and sisters,” Ms. Thomas said. “How, as a nation, have we allowed this?”
Emily Brown, youth director at American Life League, said the baby socks send an unmistakable message.
“Today we’re sending a clear message to Congress that enough is enough,” Ms. Brown said. “We cannot sit around while Planned Parenthood slaughters the most innocent human beings among us.”
In order to avoid a Senate filibuster, Republicans have said they will defund Planned Parenthood simultaneously with the repeal of Obamacare through the reconciliation process.
The repeal bill took a major step toward enactment Wednesday, when it received the endorsement of the House Freedom Caucus. The conservative stalwarts had blocked the American Health Care Act last month because it did not go far enough to repeal Obamacare.
Samuel Matthews, president of Huntington High School Students for Life, said an organization that “calls taking the life of boys and girls in the womb ‘empowering’” does not deserve taxpayer funding.
“We are here because we have a problem with Planned Parenthood,” Mr. Matthews said. “And one day soon, Planned Parenthood will be defunded.”
Mr. Sasse said pictures showing the humanity of the unborn are a “huge reason why” the youngest generation is more pro-life than previous ones.
“And this picture that you’re trying to create today is another special way to tell the story of what we’re about.”
Source>http://www.washingtontimes.com/news/2017/apr/26/planned-parenthood-defunding-lobbyists-deliver-200/
Posted by theodore miraldi at 12:46 PM