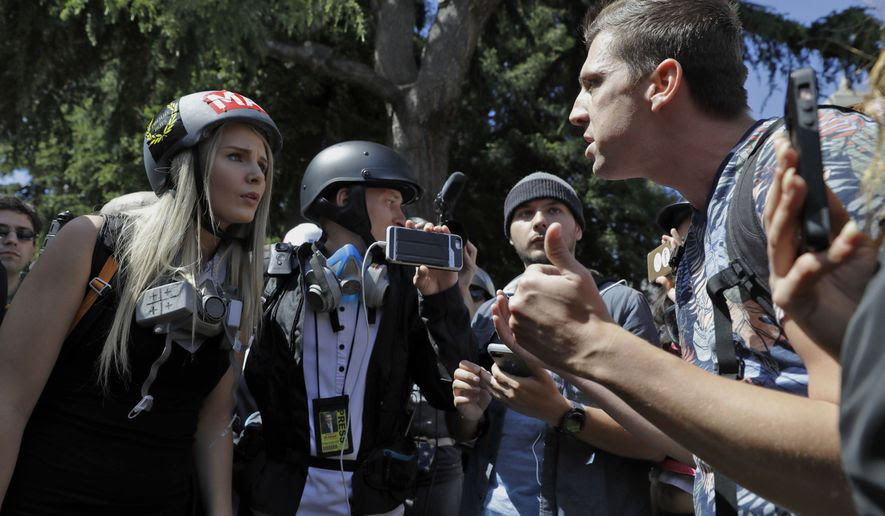 
ANALYSIS/OPINION:
The only thing anyone is allowed to hear on campus is a slogan. Thinking is so 20th century (and early 20th century at that). The adults paid to be in charge have retreated to a safe place, where never is heard an encouraging word and the skies are cloudy all day.
The First Amendment has been under the latest assault for months, and this week Howard Dean, the former governor of Vermont and onetime chairman of the Democratic Party, finally said out loud what certain prominent Democrats have hinted at and alluded to, that free speech does not necessarily include extending it to anyone who disagrees with them.
This poison spread, like so much of the toxic stuff polluting the body politic, from the campuses of the elite. Particularly the University of California at Berkeley, where visiting speakers with something to say can’t say it because it might offend the sophomore class. Cowardice rules in the university president’s office and ignorance rules in Sproul Plaza. A speech by Ann Coulter, the firebrand columnist, was canceled because everyone was afraid of what she might say.
Miss Coulter, a slender woman who might weigh 90 pounds stepping out of a shower, was eager to take her chances facing down the mob to say her piece, whatever that piece might have been, but the Berkeley cops, the university administration, the sponsoring Young America’s Foundation and the College Republicans, all trembled, looked one way and then the other, and took a powder lest the hooded brownshirts — dressed in black with robbers’ masks, actually — disrupt the tranquility of the campus.
The editors of National Review magazine observed with a bit of acid that Janet Napolitano, the president of the University of California System, was Barack Obama’s Director of Homeland Security and was responsible for keeping al Qaeda out of New York and Washington, but she can’t secure a lecture hall on a California college campus.
But even in defending free speech and all that free speech means, the editors prefaced their condemnation of cowardice and outrage at Berkeley with something of an apology for defending Miss Coulter: “We have had our differences with Ann Coulter over the years, differences that led to our eventually declining to continue publishing her work. She is charming and funny and sometimes brilliant. She is also a glib and irresponsible self-promoter. We suspect that she will not like having that written about her. We suspect that she might write something in reply.” But the editors think it is nevertheless wrong, or at least inappropriate, to chase her off the campus. Probably.
Howard Dean likes free speech and the First Amendment well enough, but with appropriate edits and the proper emendations. He looked at the work of the Founding Fathers with a physician’s eye and saw that the guarantee was not absolute, as the Founding Fathers thought it was. The amendment does not protect “hate speech,” which he thinks is anything unpleasant for a good fellow like him to hear.
The Founding Fathers thought they succeeded in writing the guarantee in stark, plain English — so plain and so clear, in fact, that even a lawyer could understand it: “Congress shall make no law respecting an establishment of religion, or prohibiting the free exercise thereof; or abridging the freedom of speech, or of the press; or the right of the people peaceably to assemble, and to petition the Government for a redress of grievances.” No ifs, ands, or buts, and not a single whereas. Nothing there about hate speech, exclusions, preclusions or exceptions.
This gives some people palpitations. It’s no mystery why such people are invariably at the likes of Berkeley and Yale and Middlebury. You’re not as likely to see or hear proposed footnotes to the First Amendment at the likes of Southeast North Dakota State, Utah A&M or Ouachita Baptist College.
“In First Amendment law,” says Glenn Harlan Reynolds, the distinguished professor of constitutional law at the University of Tennessee, “the term ‘hate speech’ is meaningless. All speech is equally protected whether it’s hateful or cheerful. It doesn’t matter if it’s racist, sexist or in poor taste, unless speech falls into a few very narrow categories — like ‘true threats,’ which have to address a specific individual, or ‘incitement,’ which must constitute an immediate and intentional encouragement to imminent lawless action — it’s protected.”
There’s a reason why the Founders put the First Amendment first. It’s the most important part of the Constitution, and as important as the rest of the Bill of Rights is, the First Amendment is the most important. With free speech, the people are armed to protect all other rights. Without it, the people are disarmed, and tyrants, the vile and ignorant like the students on certain campuses among us, rule. We allow that at our deadly peril.
Source>http://www.washingtontimes.com/news/2017/apr/27/first-amendment-under-attack-by-liberals/
Posted by theodore miraldi at 1:08 PM