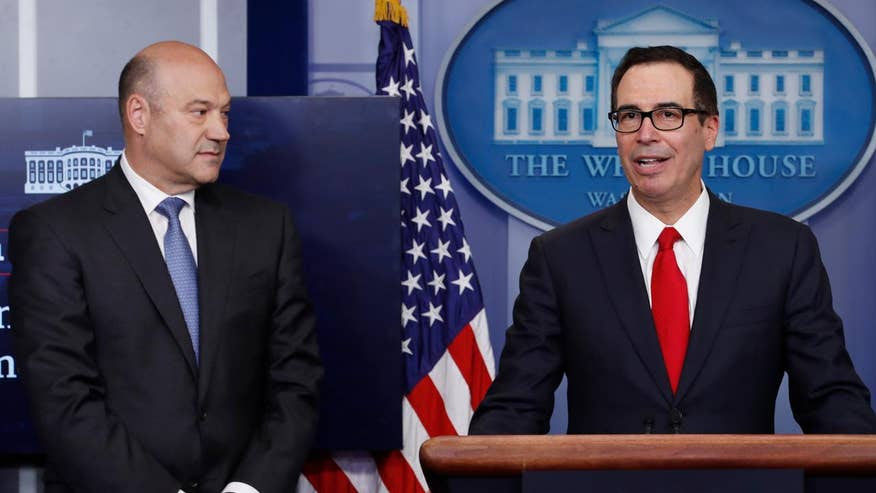 Trump administration officials outlined a sweeping tax reform plan Wednesday that calls for “massive” cuts for businesses and other changes that could yield big savings for American families.
The plan swiftly drew congressional criticism about the potential impact on the deficit. But administration officials voiced optimism that the proposal would spur economic growth, and said they'd reduce tax breaks elsewhere.
“We have a once-in-a-generation opportunity to do something really big,”  top White House economic adviser Gary Cohn said. “Tax reform is long overdue.”
As the administration nears the end of its first 100 days, Cohn and Treasury Secretary Steve Mnuchin provided the contours of the administration’s long-awaited tax plan in a White House briefing with reporters.
The plan would, perhaps most significantly, slash the corporate tax rate from 35 percent to 15 percent. Small business owners could also benefit from that rate.
“The president is determined to unleash economic growth for businesses,” Mnuchin said.
INSIDE TRUMP'S TAX PLAN
The plan also would collapse the income tax system from seven to three brackets: 10 percent, 25 percent and 35 percent. The current top rate is 39.6 percent.
The administration is looking as well to double the standard deduction, or the amount of income individuals and families can report to the IRS tax-free.
The current standard deduction would rise from $6,300 to $12,600 for individuals under the proposal. For married couples filing jointly, it would rise from $12,600 to roughly $24,000.
Earlier in the day, Mnuchin called it the “biggest tax cut and the largest tax reform in the history of our country.”
The plan will immediately face questions on Capitol Hill over the impact on the federal budget and deficit, considering the tax cuts would presumably represent billions in lost revenue every year.
Senate Finance Committee Ranking Member Ron Wyden, D-Ore., issued a statement calling it an "unprincipled tax plan that will result in cuts for the one percent, conflicts for the President, crippling debt for America and crumbs for the working people."
But officials said Wednesday they plan to eliminate most tax breaks that benefit high-income taxpayers. At the same time, they said popular tax breaks like the mortgage interest and charitable deductions would be preserved.
With administration officials saying they want to get to work with Congress as soon as possible, a statement from Senate Majority Leader Mitch McConnell, R-Ky., House Speaker Paul Ryan, R-Wis., and other top GOP lawmakers said:
“The principles outlined by the Trump Administration today will serve as critical guideposts for Congress and the Administration as we work together to overhaul the American tax system and ensure middle-class families and job creators are better positioned for the 21st century economy."
The plan would also eliminate the estate tax that Republicans often deride as the 'death tax' and the 3.8 percent tax on investment income under ObamaCare.
Officials said an underlying goal is to simplify the tax system, noting that the increase in the standard deduction would mean far fewer households would have to itemize their deductions.
Mnuchin also called for a one-time tax on corporate money overseas, predicting it would bring trillions of dollars back to the U.S.
Source>http://www.foxnews.com/politics/2017/04/26/trump-team-proposes-massive-tax-cuts-in-new-reform-plan.html
Posted by theodore miraldi at 4:08 PM