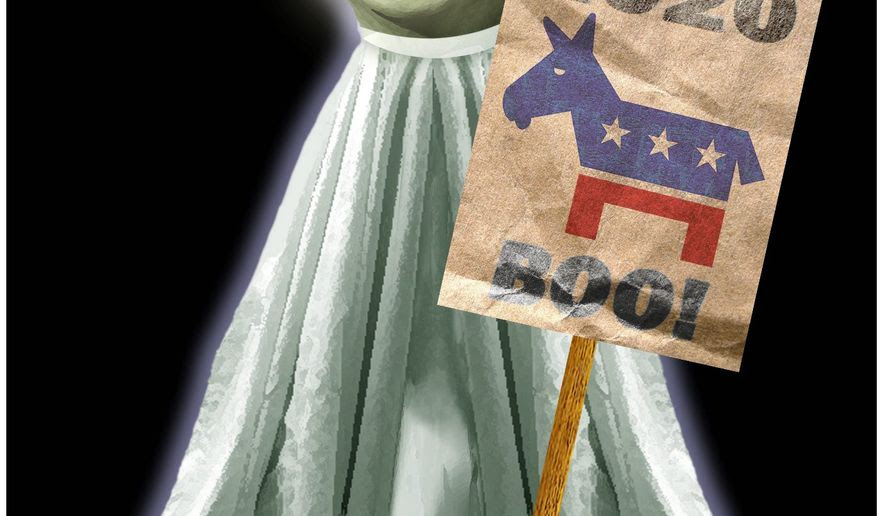 Forty-nine years ago, Vice President Hubert Humphrey was the Democratic candidate for president.
The year 1968 was a tumultuous one that saw the assassinations of rival candidate Sen. Robert F. Kennedy and civil rights icon Martin Luther King Jr. Lyndon Johnson’s unpopular lame-duck Democratic administration imploded due to massive protests against the Vietnam War.
Yet Humphrey almost defeated Republican nominee Richard Nixon, losing the election by just over 500,000 votes (43.4 percent to 42.7 percent).
Infighting Democrats could have defeated the unpopular Nixon if not for a few unforeseen developments.
Their convention in Chicago turned into a creepy carnival of televised rioting and radical protests. Hippies and leftists were seen battling police in the streets on prime-time news.
The former Democratic governor of Alabama, George Wallace, ran as a states’ rights third-party candidate and drew 13.5 percent of the vote. Wallace destroyed the Democrats’ traditional hold on the old “solid South” by winning five Southern states outright. He also siphoned off enough traditional Democratic supporters to give Nixon astonishing Republican victories in half-a-dozen other states in the region.
Nixon won over a few Northern blue-collar states that had often voted Democratic, such as Wisconsin and Ohio — again with help from Wallace, who appealed to fed-up, working-class Democrats.
What was the lesson from 1968?
The Democrats could have recalibrated their message to appeal more to working-class voters.
They should have rebuilt the old Franklin D. Roosevelt-era coalition that had elected Harry Truman and John F. Kennedy, mostly by appealing to paycheck issues and avoiding radical agendas.
Yet despite picking up 12 House seats in the 1970 midterm elections, and instead of attributing the 1968 loss to Wallace’s third-party populism and voter pushback against radicalism, the Democrats went off the rails and veered hard left in 1972.
The lowering of the voting age to age 18 in 1971 also tricked Democrats into wrongly thinking that most new young voters were leftists and would vote in record numbers for leftist candidates.
So the Democrats in 1972 foolishly nominated die-hard left-wing South Dakota Sen. George McGovern.
Although President Nixon wasn’t a popular political figure, he was busy unifying voters by moving all over the political map. The wily, flexible and pragmatic Nixon talked hard-right but actually moved to the center. He created the Environmental Protection Agency. He vastly expanded the welfare state and pushed for universal health care.
Nixon also had imposed wage and price controls, and visited Communist China. Nixon ridiculed conservative icons such as California Gov. Ronald Reagan and commentator William F. Buckley Jr. as right-wing troublemakers and elitist ideologues.
In other words, Nixon was as controversial — and as politically unpredictable and misunderstood — as Donald Trump.
The November 1972 election proved one of the biggest Republican landslides in American history. Nixon was re-elected with more than 60 percent of the popular vote, winning 49 of 50 states.
Democrats held on to Congress only because sober Democratic senators and House members up for re-election never followed the far-left trajectory of McGovern.
Democrats would remain out of the White House until 1980, when Jimmy Carter ran a winning Humphrey-like campaign as a centrist populist outsider from the South.
Will the 2020 end up like 1972 for Democrats?
So far, the similarities are eerie.
Hillary Clinton lost the election but won the popular vote over Mr. Trump. Had she campaigned more in the so-called “blue wall” states of the Rust Belt and Midwest, and not stupidly labeled a quarter of the country “irredeemable” and “deplorable,” Mrs. Clinton may have won in the Electoral College as well.
As in 1968, the future lesson from the lost 2016 election was for Democrats to appeal more to working classes — and not to pander on polarizing hot-button cultural and social issues.
But it appears that Democrats may be on their way to another hard-left McGovern-style blowout.
Democrats are now even blaming Mrs. Clinton for being too centrist rather than for running a terrible campaign. The newly elected chairman of the Democratic National Committee, Tom Perez, is a polarizing far-left figure.
The highest-profile Democratic Party supporters are increasingly smug Hollywood actors, rich Wall Street and Silicon Valley elitists, and embittered members of the media, along with careerist identity groups and assorted protest movements — a fossilized 1972 echo chamber.
Democrats’ politically correct messaging derides opponents as deplorable racists, sexists, bigots, xenophobes, homophobes, Islamophobes and nativists. That shrill invective only further turns off middle America. Being merely anti-Trump is no more a successful Democratic agenda than being anti-Nixon was in 1972.
Of course, anything can happen in politics.
Mr. Trump may not seek re-election or could become as unpopular as Lyndon Johnson.
War or economic depression could overshadow politics.
The Democrats could find a charismatic candidate like Barack Obama who could win on personal popularity.
Nonetheless, if in 2020 Democrats go hard left as they did in 1972, then they will likely lose just as big.
• Victor Davis Hanson is a classicist and historian with the Hoover Institution at Stanford University.
Source>http://www.washingtontimes.com/news/2017/apr/26/2020-election-could-be-another-1972-for-democrats/
Posted by theodore miraldi at 9:06 AM