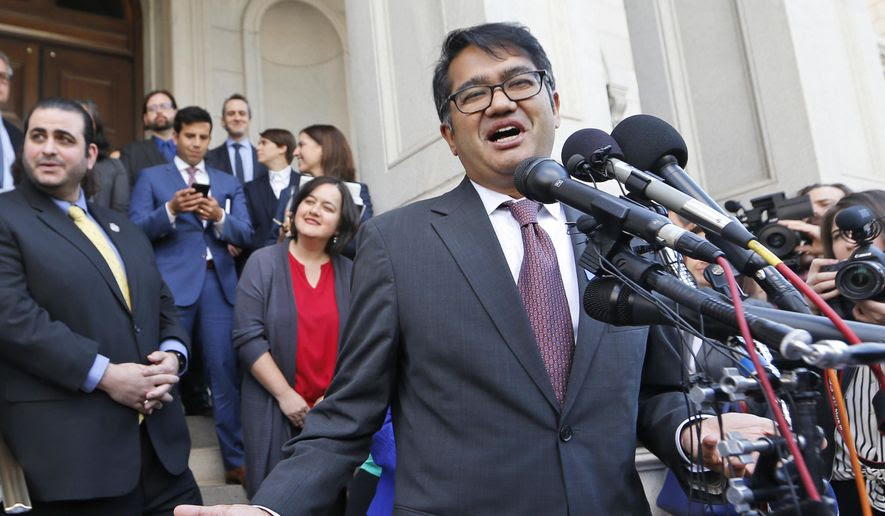 A federal appeals court upheld a block on President Trump’s extreme vetting executive order, in a ruling Thursday that said the president’s policy, while cloaked in national security concerns, “drips with religious intolerance, animus, and discrimination” toward Muslims.
“Congress granted the President broad power to deny entry to aliens, but that power is not absolute. It cannot go unchecked when, as here, the President wields it through an executive edict that stands to cause irreparable harm to individuals across this nation,” Chief Judge Roger L. Gregory said in the controlling opinion for the 4th U.S. Circuit Court of Appeals
The ruling maintains a national injunction preventing the Homeland Security Department from blocking admissions of visitors from six majority-Muslim countries. It also prevents the department from temporarily suspending the refugee program.
Judge Gregory, first nominated to the court by former President Bill Clinton, went through a lengthy description of then-candidate Trump’s proposal for a ban on Muslim entrants to the U.S., then drew a chain between those comments and Mr. Trump’s words and actions as president.
That, the judge wrote, amounts to “religious animus” that runs afoul of the First Amendment.
The decision was complicated, with multiple concurrences and dissents. But nine judges ruled that the Trump administration overstepped its bounds, while three judges backed the president’s order as lawful.
All nine of the judges who upheld the injunction were nominated by Democrats, while the three judges who dissented were appointed by Republican presidents, underscoring the deep ideological divisions that have spread across the federal judiciary.
The appeals court said a district court, which first issued the injunction, had gone too far by including Mr. Trump himself in the blockade.
“We therefore lift the injunction as to the President only. The court’s preliminary injunction shall otherwise remain fully intact,” Judge Gregory ordered.
Mr. Trump had initially sought to halt almost all entries from persons from Iran, Iraq, Libya, Somalia, Sudan, Syria and Yemen — all countries first identified by Congress or the Obama administration as danger spots.
His first executive order, issued in January, was blocked by the courts, and he returned with a new order in March he said was written to accommodate the courts’ concerns. The new order dropped Iraq from the list after that country promised better cooperation and vetting of travelers.
But the 4th Circuit ruled the “animus” Mr. Trump showed toward Muslims during the campaign colored the new order, which it dubbed “EO-2.”
“EO-2 cannot be divorced from the cohesive narrative linking it to the animus that inspired it. In light of this, we find that the reasonable observer would likely conclude that EO-2’s primary purpose is to exclude persons from the United States on the basis of their religious beliefs,” Judge Gregory wrote.
Source>http://www.washingtontimes.com/news/2017/may/25/donald-trump-travel-ban-appeals-court-upholds-bloc/
Posted by theodore miraldi at 4:01 PM