A DOUBLE STANDARD Toward the DIVINE

Republicans are reviled when talking about God and Democrats, not so much 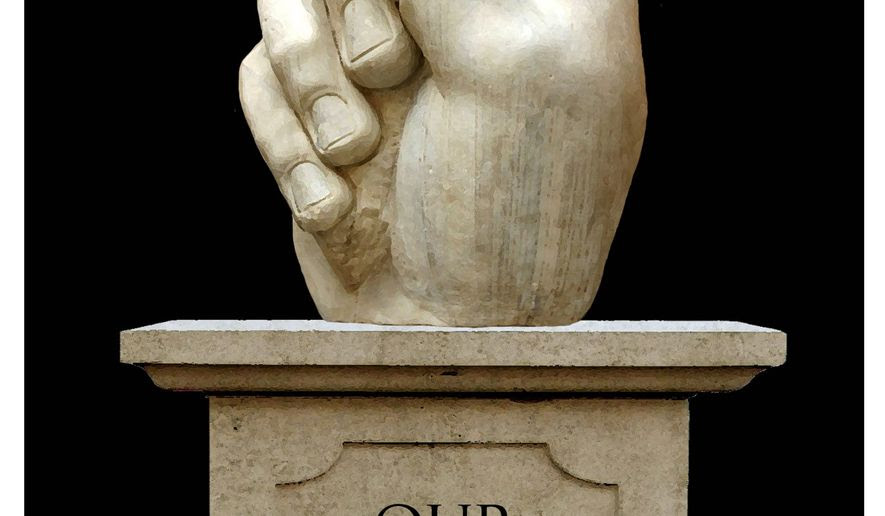 Illustration on the origin of American constitutional rights by Alexander Hunter

Dave Brat
ANALYSIS/OPINION:
Liberal elected officials are free to invoke God in the public square. They do so regularly when attempting to gain support for a new federal program or, more recently, to stop Republican efforts to reform Obamacare.
During her floor speech on the Republican health care bill, Minority Leader Nancy Pelosi quoted Pope Francis and said Congress’ responsibility to health care was “biblical.” President Kennedy once outlined his vision of public service by saying, “Here on earth, God’s work must truly be our own.”
Whether for political gain or because of deeply held beliefs, both Mrs. Pelosi and Kennedy were right to observe that biblical commandments play an integral role in our civil society. The dignity of every life from the unborn baby to those with disabilities to the elderly is rooted in natural law and the commandment to “love thy neighbor.”
But there is a double standard for Republican politicians.
My Virginia colleague, Rep. Donald McEachin, regularly hosts his town hall meetings in churches without protest from the left. When I held a town hall at a church in early May, I was criticized for holding it on church property.
Some in the audience booed the pastor’s opening prayer, but the disrespectful behavior did not just end there. At times, four-letter expletives were hurled across the church sanctuary at me and at other members of the audience who dared disagree.
One woman carried a sign quoting scripture, Matthew 25:40. Yet, she was part of the crowd booing loudly when I suggested that the Establishment Clause did not mean a total separation of church and state and that our rights come from God. I was shouted down for pointing out that the Judeo-Christian tradition is one of the three pillars, along with the rule of law, and the free markets, that made America the greatest nation on earth.
Our Founders explicitly outlined where our rights came from in the Declaration of Independence. In fact, the writings of our Founders were full of references to the great thinkers of their time, who unequivocally believed our rights emanated from our Creator. Even though some of our Founders were not outwardly religious, none conceived of a day when the Judeo-Christian tradition did not at least form the moral backdrop for our country.
The early motto of Harvard, which was founded in 1636, was “Truth for Christ and the Church.” Harvard has long abandoned that motto, yet the Judeo-Christian tradition is rooted in all of the earliest acclaimed educational institutions in our country.
Today by contrast, philosophy departments of educational institutions are teaching that everyone can have their own version of the truth and that rights are fluid and changing. While that might work in the classroom, it does not play out very well when governing. Foreign leaders who reject the dignity of human life and commit atrocities cannot be left to simply practice their own version of truth.
History reveals too many examples of human rights violations and horrific genocides as a result of totalitarian regimes that abandoned God and natural law. Dictators thrived with the toxic combination of a big state and a godless philosophic foundation. Examples include Rome to the influence of Karl Marx on the Cold War-era Soviet Union and China. Or consider the stark difference we see between the economic flourishing and religious freedom in South Korea versus the bleak conditions of North Korea.
If you examine those in the Western tradition who fought to end slavery and advance the value of human rights, you will see individuals who were willing to stand up for the voiceless because their faith was what grounded them. This includes individuals like Abraham Lincoln, John F. Kennedy, Martin Luther King and Ronald Reagan. All stood up for the “least of these” because their religious beliefs informed their views on the value of human life.
The source of natural law must reference a higher universal power and the divine. Without it, we are left with gaping holes that struggle to explain the meaning and purpose of life. Complete separation of church and state leaves rights to be defined not by a loving God, but the unpredictable whims of man. It is dangerous to believe rights come from fallible men and governing authorities; because what man can give, he or she can just as easily take away.
This pillar of our country’s founding received the loudest booing of the night at my town hall. But if we remove natural law from our vocabulary and try to strip it out of the Declaration of Independence, we are left without any common foundation or truth. Government no longer will exist to protect the unalienable rights of life, liberty and pursuit of happiness — but it will be free to arbitrarily define and prescribe your freedoms.
The left may boo me for vowing to protect their God-given rights, but I will protect them anyway.
Source>http://www.washingtontimes.com/news/2017/may/30/religious-talk-in-congress-praised-by-democrats-no/
Posted by theodore miraldi at 8:28 AM