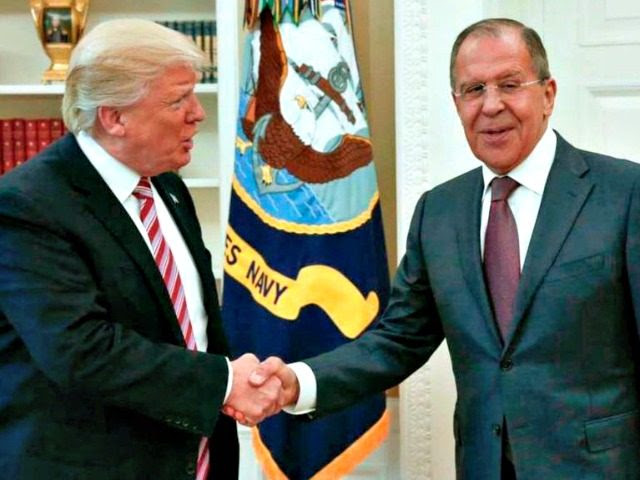 Current and former U.S. officials, supposedly concerned that President Trump had shared some “highly classified information” with the Russian foreign minister and ambassador to the U.S. last week, leaked that information to the Washington Post in anarticle published Monday.

However, the report admits that it is “unlikely” Trump broke any laws.
“As president, Trump has broad authority to declassify government secrets, making it unlikely that his disclosures broke the law,” the report said.
In addition, his national security adviser, who was at the meeting, told the Post nothing was shared that was not already publicly known.
“At no time were any intelligence sources or methods discussed and no military operations were disclosed that were not already known publicly,” said Army Lt. Gen. H.R. McMaster.
McMaster later told reporters at the White House, “Two other senior officials who were present, including the secretary of state, remember the meeting the same way and have said so. Their on-the-record accounts should outweigh those of anonymous sources. I was in the room, it didn’t happen.”
“This story is false. The president only discussed the common threats that both countries faced,” added Dina Powell, Deputy National Security Advisor for Strategy, who also attended the meeting.
The current and former officials told the Post that Trump shared information with Russian Foreign Minister Sergey Lavrov and Russian Ambassador Sergei Kislyak that was obtained by a U.S. partner through an intelligence-sharing agreement and was so sensitive it was withheld from U.S. allies and restricted within the U.S. government.
The officials said Trump’s disclosure risked cooperation from an ally that had access to the inner workings of the Islamic State, which they then shared details of with the Post.
The current and former officials told the Post that Trump discussed an Islamic State terrorist threat related to the use of laptop computers on aircraft.
They said that senior White House officials took steps to contain the damage, placing calls to the CIA and National Security Agency after the meeting.
The officials bashed the president, portraying him as “reckless.”
A “former senior U.S. official close to current administration officials” said Trump “seems to be very reckless, and doesn’t grasp the gravity of the things he’s dealing with, especially when it comes to intelligence and national security. And it’s all clouded because of this problem he has with Russia.”
They also claimed that Trump seemed to be “boasting” about his inside knowledge of the threat.
The officials said Trump “did not reveal the specific intelligence gathering method, but described how the Islamic State was pursuing elements of a specific plot and how much harm such an attack could cause under varying circumstances.”
“Most alarmingly, officials said, Trump revealed the city in the Islamic State’s territory where the U.S. intelligence partner detected the threat,” it said.
The officials then leaked the name of the city to the Post, which decided to withhold most of the plot details under the urging of current officials.
The officials said the name of the city would be useful for Russia to help identify the U.S. ally or intelligence capability involved.
The Post said the officials declined to identify the ally that collected the information, but said, “It is one that has previously voiced frustration with Washington’s inability to safeguard sensitive information related to Iraq and Syria.”
The officials claimed Trump  described measures the U.S. has taken or is contemplating to counter the threat, “including military operations in Iraq and Syria as well as other steps to tighten security,” but did not say what those were.
Secretary of State Rex Tillerson said that was false.
“During President Trump’s meeting with Foreign Minister Lavrov a broad range of subjects were discussed among which were common efforts and threats regarding counter-terrorism.  During that exchange the nature of specific threats were discussed, but they did not discuss sources, methods or military operations,” he said.


Michelle Moons contributed to this report.
Source>http://www.breitbart.com/big-government/2017/05/15/deep-state-leaks-highly-classified-info-to-washington-post-to-smear-president-trump/
Posted by theodore miraldi at 7:57 AM