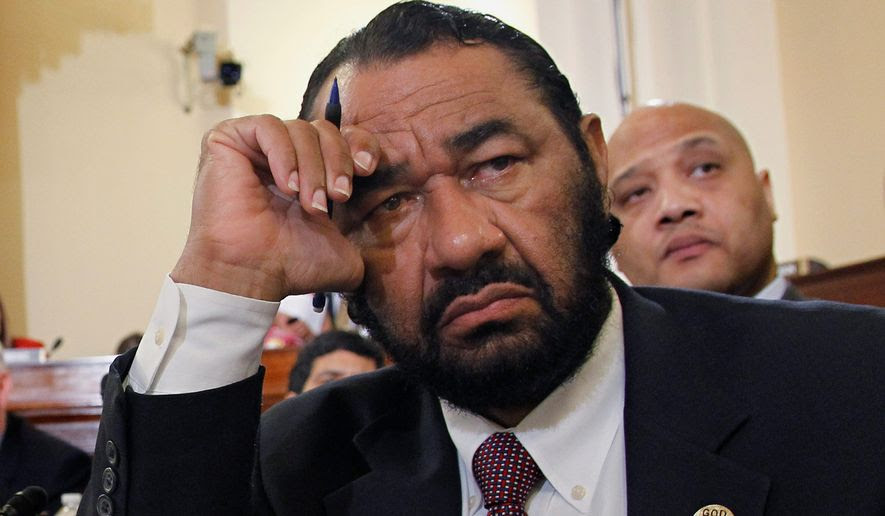 
A Democratic congressman called for impeaching President Trump on Monday, saying Congress must prove to the country that the laws apply to everyone.
“President Trump is not above the law. He has committed an impeachable act and must be charged,” said Rep. Al Green, Texas Democrat. “To do otherwise would cause some Americans to lose respect for, and obedience to, our societal norms.”
Mr. Green said the firing of FBI Director James B. Comey last week was an attempt to intimidate and obstruct the bureau’s probe into potential illicit connections between Trump campaign figures and the Russian government.
He’s the latest Democrat to broach the subject of impeachment, though most of those have speculated about the possibility. Only a few have actually called for the process to begin.
California Rep. Maxine Waters has been talking about impeachment almost since Mr. Trump’s presidency began, but has doubled down in wake of Mr. Comey’s firing. Ms. Waters even suggested charging the president with obstruction of justice over dismissing the FBI director, which she claims was an attempt to end the inquiry into the Trump campaign’s possible Russian ties.
Rep. Keith Ellison called for Mr. Trump’s impeachment months ago, and now says Mr. Comey’s dismissal is a “constitutional crisis.”
Noticeably absent among those calling for Mr. Trump to be removed from office are members of the Democratic leadership.
House Minority Leader Nancy Pelosi said in February that while there weren’t grounds for impeachment at the time, Democrats would be on the lookout.
She said the president’s supporters were not ready to give up on him or accept the fact that they “made a mistake” in voting for him, but that if a crime was committed such people could be open to the idea.
“By the time the case is made, perhaps they’ll be ready to accept that. It’s very hard, impeachment, very hard,” she explained.
The National Republican Congressional Committee is banking on loyalty among Mr. Trump’s supporters to stave off impeachment — but is using the threat to raise money. In an email sent the day after Mr. Comey was fired, the NRCC warned voters that Republicans need to protect the House.
“If Democrats win the House their #1 priority would be to impeach our president. We must protect the House at ALL costs, Fellow Conservative,” the email read.
Impeachment is a prerogative of the House. Lawmakers can pass articles of impeachment by a majority vote. The Senate then holds a trial on the articles, and it takes a two-thirds vote to convict and remove an official.
Republicans control both the House and Senate, and are unlikely to pursue impeachment of Mr. Trump, though Mr. Green said there’s a chance if the public demands it.
“Our mantra should be ‘ITN — Impeach Trump Now,’” Mr. Green said.
Source>http://www.washingtontimes.com/news/2017/may/15/democratic-congressman-makes-case-impeach-trump/
Posted by theodore miraldi at 5:42 PM