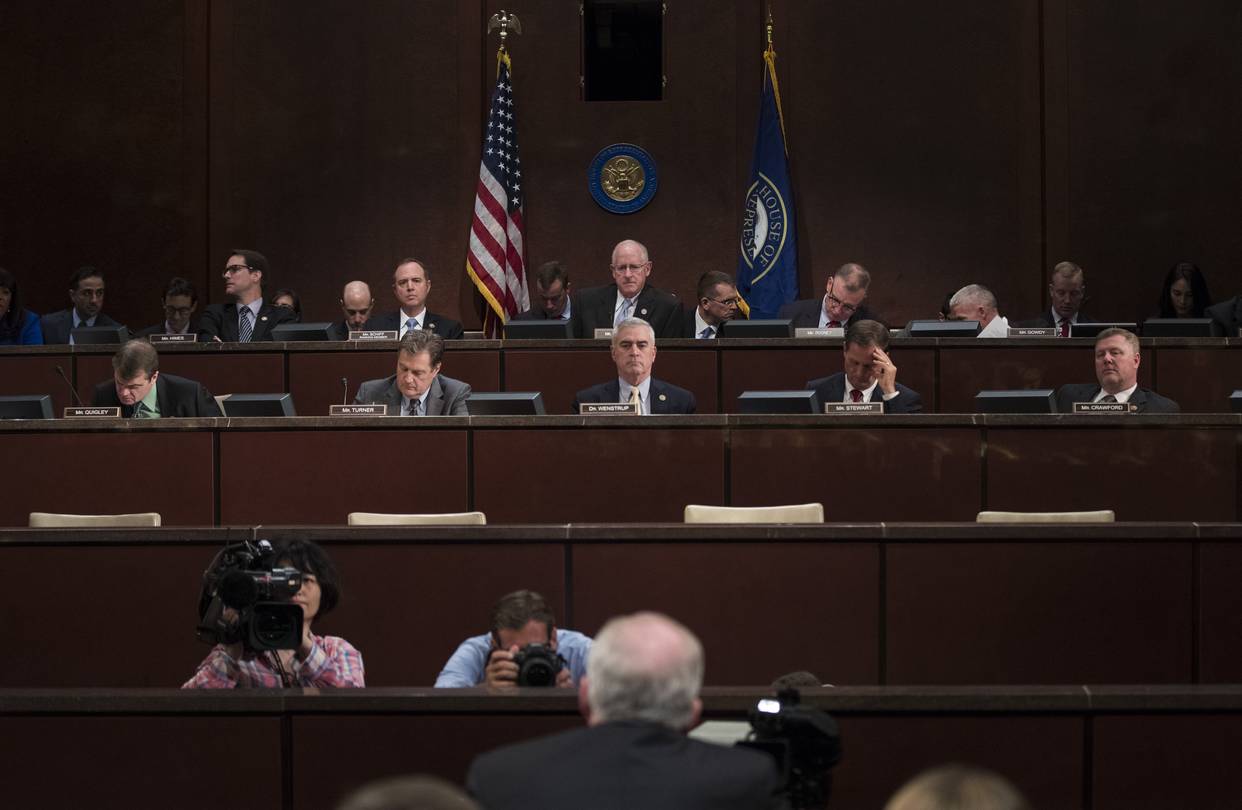 Byron Tau
The House Intelligence Committee issued seven subpoenas on Wednesday, in a sign that its investigation into alleged Russian meddling in the 2016 election is ramping up in scope and intensity, according to people familiar with the matter.
The Republican-led committee issued four subpoenas related to the Russia investigation. Three subpoenas are related to questions about how and why the names of associates of President Donald Trump were unredacted and distributed within classified reports by Obama administration officials during the transition between administrations.
The committee has subpoenaed the National Security Agency, the Federal Bureau of Investigation and the Central Intelligence Agency for information about what is called “unmasking.” Republicans on the committee have been pushing for a thorough investigation of how the names of Trump campaign officials became exposed in classified intelligence reports based off intelligence community intercepts.
Those subpoenas seek information on requests made by former national security adviser Susan Rice, former CIA Director John Brennan and former United Nations Ambassador Samantha Power for names to be unmasked in classified material. The three didn’t personally receive subpoenas, the people familiar with the matte said. Mr. Brennan, Ms. Rice and Ms. Power didn’t immediately respond to requests for comment.
Ms. Power hasn’t previously been reported as a potential witness in the probe so her inclusion in the subpoenas may mean Republicans are broadening their areas of investigation.
Typically, information about Americans intercepted in foreign surveillance is redacted, even in classified reports distributed within the government, unless a compelling need exists to reveal them. Unmasking requests aren’t uncommon by top intelligence community officials but Republicans want to know whether any of the unmaskings of Trump campaign officials during the transition were politically motivated.
The four subpoenas related to the Russia investigation remain unknown but Rep. Adam Schiff, the top Democrat on the panel, has previously said that former national security adviser Mike Flynn would be subpoenaed by the panel. It is unclear if Mr. Flynn is one of the four targeted Wednesday.
The House Intelligence Committee is one of two bodies currently probing the question of whether Russian meddled in the 2016 election and whether anyone from Mr. Trump’s campaign played a role. The Senate Intelligence Committee is conducting its own investigation and has already issued subpoenas to Mr. Flynn and his businesses. Mr. Trump has said there was no collusion with Russia and called the investigation a witch hunt. Russia has denied the allegations.
The House panel also sent a letter to former White House press aide Boris Epshteyn asking him to voluntarily submit information to the committee. Mr. Epshteyn briefly served as special assistant to the president in the Trump administration before departing his post earlier this year.
“Like many others, Mr. Epshteyn has received a broad, preliminary request for information from the House Intelligence Committee,” an attorney for Mr. Epshteyn said Wednesday. “This is a voluntary request. Mr. Epshteyn has not been subpoenaed nor do we anticipate that he will be. We have reached out to the committee with several follow up questions and we are awaiting their response in order to better understand what information they are seeking and whether Mr. Epshteyn is able to reasonably provide it.”
—Shelby Holliday, Carol E. Lee and Shane Harris contributed to this article.
Source>https://www.wsj.com/articles/house-intelligence-committee-said-to-have-issued-seven-subpoenas-in-russia-probe-1496261435
Posted by theodore miraldi at 4:57 PM