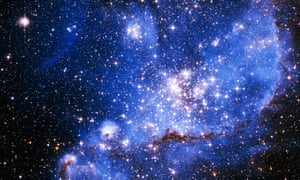 They call it the multiverse. It’s a cosmos in which there are multiple universes. And by multiple, I mean an infinite number. These uncountable realms sit side by side in higher dimensions that our senses are incapable of perceiving directly.
Yet increasingly astronomers and cosmologists seem to be invoking the multiverse to explain puzzling observations.
The stakes are high. Each alternate universe carries its own different version of reality. There will be one where you wrote this column and I read it; one where the Guardian is an alt-right propaganda rag; even a really weird one in which Donald Trump uses twitter to spread nothing but amusing cat videos.


It sounds bonkers but the latest piece of evidence that could favour a multiverse comes from the UK’s Royal Astronomical Society. They recently published a study on the so-called ‘cold spot’. This is a particularly cool patch of space seen in the radiation produced by the formation of the Universe more than 13 billion years ago.
The cold spot was first glimpsed by NASA’s WMAP satellite in 2004, and then confirmed by ESA’s Planck mission in 2013. It is supremely puzzling. Most astronomers and cosmologists believe that it is highly unlikely to have been produced by the birth of the universe as it is mathematically difficult for the leading theory – which is called inflation – to explain.
This latest study claims to rule out a last-ditch prosaic explanation: that the cold spot is an optical illusion produced by a lack of intervening galaxies.
One of the study’s authors, Professor Tom Shanks of Durham University, told the RAS, “We can’t entirely rule out that the Spot is caused by an unlikely fluctuation explained by the standard [theory of the Big Bang]. But if that isn’t the answer, then there are more exotic explanations. Perhaps the most exciting of these is that the Cold Spot was caused by a collision between our universe and another bubble universe. If further, more detailed, analysis … proves this to be the case then the Cold Spot might be taken as the first evidence for the multiverse.”
Heady stuff. But the irony is that if there is a multiverse, scientists will have to accept that the ultimate goal of physics – to explain why our universe is the way it is – could be forever out of reach.
The endgame for physics has been to provide the reason why our universe takes the form it does. To do this it must explain why certain fundamental quantities have the values they do. For example: the speed of light, the mass of an electron, the strength of the gravitational interaction.
If there is a multiverse, however, that quest could be doomed to failure.
Just as there are an infinite number of similar yet slightly different universes (like the one in which you have written this column not me), there will also be an infinite number in which the basic laws of physics are different.
So, every possible combination of physics is tried out across the multiverse. Inevitably then, by nothing more than blind luck, at least one will have the conditions we see around us today. It’s just a big old accident, and that hardly seems very satisfying.
One of the most vocal opponents of the multiverse theory is – ironically – one of its original architects. Paul Steinhardt, Princeton University, helped develop inflation, the theory of the origin of our universe. It’s the one that struggles to explain the cold spot, whilst also giving rise to the multiverse because according to its maths once a universe starts to form it triggers more to be born ad infinitum.
However, Steinhardt turned against his own theory.
In 2014, he told Scientific American magazine, “Our observable universe would be just one possibility out of a continuous spectrum of outcomes. So, we have not explained any feature of the universe by introducing inflation after all. We have just shifted the problem of the original big bang model (how can we explain our simple universe when there is a nearly infinite variety of possibilities that could emerge from the big bang?) to the inflationary model (how can we explain our simple universe when there is a nearly infinite variety of possibilities that could emerge in a multiverse?).”
Put this way, a multiverse doesn’t sound attractive. It would cut to the very heart of physics’ purpose. Nature, of course, doesn’t care about this. Maybe the cosmos really is this way and we just have to accept it. Certainly, there are many who are willing to defend the multiverse as a valid direction for thought.
Comfortingly, if we do live in a multiverse, we can be assured that somewhere out there is an alternate version of you and me that have already figured all this out (and won a Nobel prize for the effort).
Source>https://www.theguardian.com/science/across-the-universe/2017/may/17/multiverse-have-astronomers-found-evidence-of-parallel-universes
Posted by theodore miraldi at 1:24 PM