So, the FATE of the Republic Rests on Trump’s Choice of Adjectives? 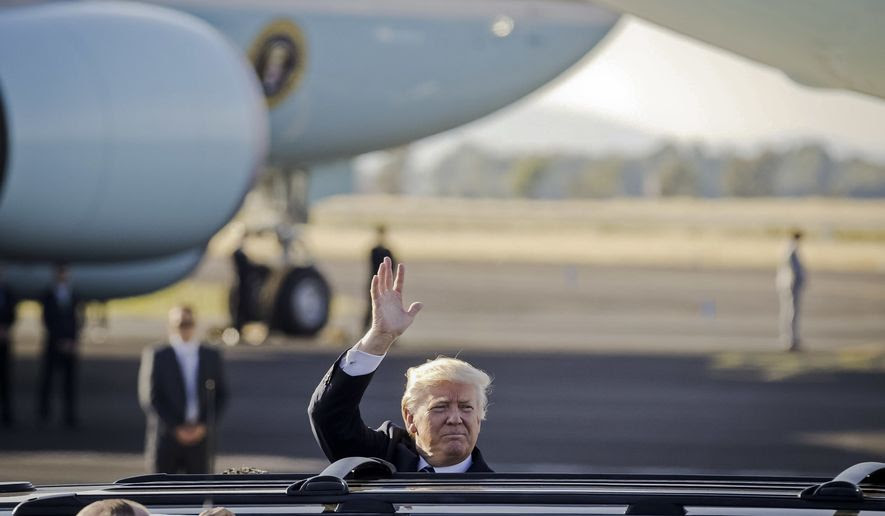 Have you heard the latest scandal involving President Trump?
During a speech in Saudi Arabia, Mr. Trump applauded Middle East leaders for a series of steps they have taken to confront radical Islamic terrorism.
“Of course, there is still much work to be done,” he went on. “That means honestly confronting the crisis of Islamic extremism and the Islamists and Islamic terror of all kinds. We must stop what they’re doing to inspire, because they do nothing to inspire but kill.”
Can you believe it?
I demand a special counsel, council or counsel — oh whatever! — to look into this immediately!
Hearings! Hold hearings and demand those in attendance of the speech appear to testify! What did the president say and when did he say it?
Did the president have a secret recording system installed that possibly captured the entire speech?
What were the conversations President Trump had with the Russians before he gave the speech? Did the Russians pay Mr. Trump to say that?
I dare say, it is high time we discuss the real possibility of, you know, the “I-word!” You know? Impeachment!
Remember, in scandals like these, it is always the coverup that is so much worse than the original crime.
Speechgate! Wordsgate! Radical Islamic terrorismgate!
Right away, White House officials went on defense.
“He’s just an exhausted guy,” leaked somebody from the White House traveling with the president.
Yeah, well, “exhausted” doesn’t explain away Russian involvement in this matter and the potential secret recording of the speech and the need for a special prosecutor and congressional hearings.
And by “exhausted,” is this White House official suggesting in some way that Mr. Trump has gone “low energy” on us after running an entire presidential campaign defeating low-energy politicians?
Despite the wall-to-wall coverage of the speechgate scandal in Saudi Arabia, it was hard to pinpoint what exactly was, shall we say, the very worst, most odious and pernicious specific aspect of this scandal.
“Trump diverted slightly from his prepared remarks in using ‘Islamic’ rather than ‘Islamist,’” one media outlet gamely explained. “After remaining largely on script, that diversion caught the attention of many listeners who were curious to see whether Trump would use the phrase.”
Or maybe this one is “Grammargate” or “Dictiongate” or maybe “Phraseologygate.”
Whatever you want to call it, it is just scandalous.
Mr. Trump went on to urge all people to stand together “against the murder of innocent Muslims, the oppression of women, the persecution of Jews and the slaughter of Christians. Religious leaders must make this absolutely clear: Barbarism will deliver you no glory. Piety to evil will bring you no dignity.
“If you choose the path of terror, your life will be empty, your life will be brief, and your soul will be fully condemned,” Mr. Trump told his Muslim audience.
These lines, apparently, did not amount to a scandal, according to reports.
Meanwhile, a radical Islamic terrorist detonated a suicide bomb as a packed concert theater was emptying Monday night in Manchester, England. More than 20 innocents, including an 8-year-old girl, were killed.
So, the fate of the Republic rests on Trump’s choice of adjectives?
Source>http://www.washingtontimes.com/news/2017/may/23/the-fate-of-the-us-rests-on-trumps-choice-of-adjec/
Posted by theodore miraldi at 8:41 AM