Maybe people are finally coming to their senses. Oscar Lopez Rivera in no way should be put on a pedestal for being a murderer. And those who insist share the same evil in their hearts...tmiraldi 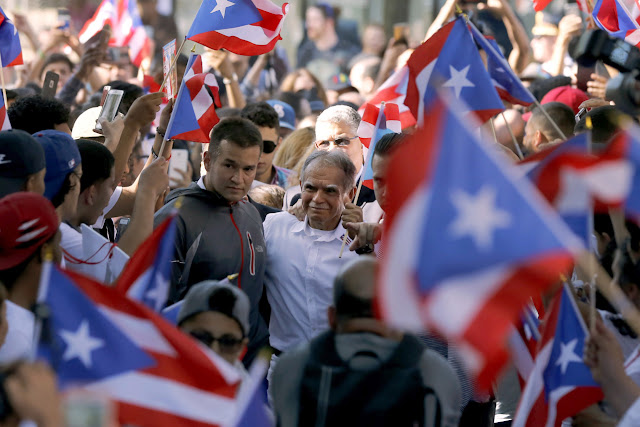 
Sponsors and government officials marched away from the Puerto Rican Day Parade on Monday — with the New York Yankees, JetBlue and even the city’s top cop ditching the event over its decision to honor a deadly terror organization’s kingpin.
Police Commissioner James O’Neill cited the bloodshed caused by the Puerto Rican nationalist group once run by Oscar López Rivera, who will be hailed at the June 11 march by the organizers of the annual celebration.

“I can’t support a man who was the co-founder of an organization that engaged in over 120 bombings, six people killed and seriously injured police officers,” O’Neill said.
“I usually do march in most of the parades with the fraternal organizations, but I am not going to be marching this year . . . I am not going to march.”
Before President Obama commuted his sentence in January, López Rivera spent 36 years in prison for his role as a leader of the FALN, which was behind a series of bloody attacks, including the 1975 bombing of Fraunces Tavern in lower Manhattan that killed four people and a blast that maimed a cop at Police Headquarters in 1982.
López Rivera’s defenders say he never directly participated in plotting a terror attack.
The Yankees and JetBlue had been slated as sponsors of the parade, but both issued statements Monday announcing they would not take part, citing the López Rivera furor. They join another major sponsor, Goya Foods, which also recently bailed out.
The Yankees’ boycott particularly stings. Bronx Bombers who have graced the parade include Puerto Rican native Bernie Williams.
“The New York Yankees are not participating in this year’s Puerto Rican Day parade,” the team said in a statement.
“However, for many years, the Yankees have supported a scholarship program that recognizes students selected by the parade organizers. To best protect the interests of those students, and avoid any undue harm to them, the Yankees will continue to provide financial support for the scholarships, and will give to the students directly.”
The Yankees had no further comment.

Saying 'no' to a parade that honors a terrorist

JetBlue pulls out of Puerto Rican Day Parade amid controversy

Mayor de Blasio, who is expected to march in the parade, said he had “respect” for O’Neill’s views, but defended his own decision to participate.
“This is a very important event in New York City,” he told NY1 Monday night. “Look, the parade decided to honor a certain individual, but that does not change the basic nature of the parade, and what it means to the city, so I look forward to marching.”
JetBlue, which was named the official airline of the parade, said it pulled out because “it became clear that the debate about this year’s parade was dividing the community and overshadowing the celebration of Puerto Rican culture that we had set out to support.”
JetBlue said it would direct its funds to support scholarships for “Puerto Rican students in both New York and Puerto Rico.”
“We did not make this decision lightly and hope all sides will come together to engage in a dialogue about the parade’s role in unifying the community at a time when Puerto Rico needs it most,” JetBlue said in a statement.
It was unclear if other sponsors will bail out. They include AT&T, Coca-Cola, CUNY, the Daily News and the United Federation of Teachers.
A police union is urging the companies to back out or face a boycott by its members.
“We are asking our members not to participate in the Puerto Rican Day parade. More importantly, as long as Oscar López Rivera is allowed to participate, we will be asking our members to boycott any corporation that continues to help fund this event,” said Lou Turco, president of the Lieutenants Benevolent Association.

JetBlue pulls out of Puerto Rican Day Parade amid controversy

He said his members should remember come election time which politicians supported the release of a “convicted terrorist.”
“We support the NYPD members who were seriously injured and the families of the innocent people who lost their lives during these attacks throughout the United States and in our city,” Turco said.
“We took an oath to protect and serve the people. Unfortunately, this year’s views and values of the National Puerto Rican Day Parade committee do not conform with the society’s mission of promoting peace and unity.”
Detectives’ Endowment Assocation President Michael Palladino slammed Council Speaker Melissa Mark-Viverito for her role in advancing López Rivera’s release and parade honor.
“When elected, the speaker took an oath to uphold the Constitution of the United States. Mark-Viverito violates that oath every time she celebrates this terrorist,” Palladino said.
The speaker, a native of Puerto Rico, said she was “disappointed” by sponsors who quit the parade, saying they acted based on “misinformation” and “lies.” She said the police unions put out “inflammatory statements.”
She said the support for López Rivera was about “human rights,” not politics.
Source>http://nypost.com/2017/05/23/sponsors-the-yankees-join-list-of-those-boycotting-the-puerto-rican-day-parade/
Posted by theodore miraldi at 8:01 AM