The ACLU’s Army of EX-CONS 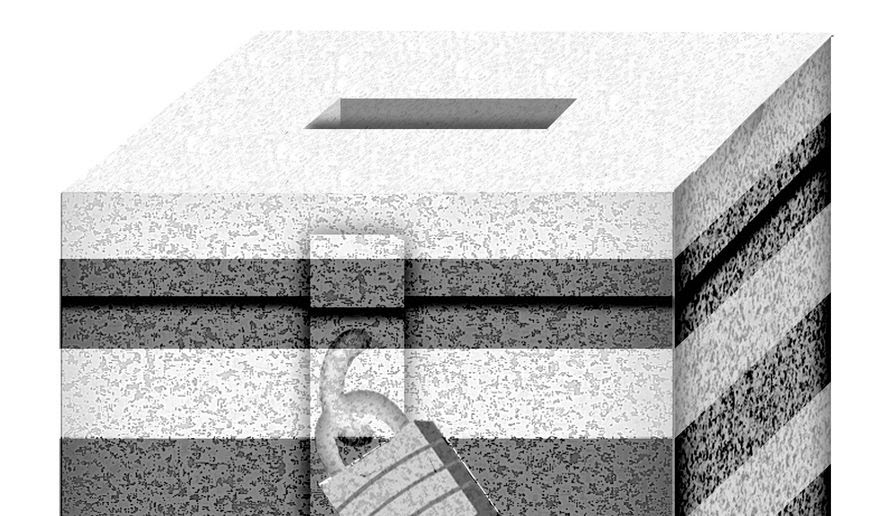 Illustration on imprisoned felons on the voter rolls by Alexander hunter

Robert Knight
ANALYSIS/OPINION:
Not content with filing nuisance lawsuits all over the country, most of them aimed at thwarting the Trump administration, the American Civil Liberties Union (ACLU) is plunging into local political campaigns.
In Philadelphia, about 40 ACLU ex-con canvassers like Mike Twiggs, 59, who served 41 years for murder, knocked on doors and distributed literature keyed to the Democratic primary election last Tuesday in which voters selected newcomer Larry Krasner as the district attorney candidate. Mr. Twiggs was featured in a May 16 Politico article about the ACLU’s new initiative.
The ACLU sure picked the perfect city for a test run because Philadelphia’s election officials refuse to remove those civic-minded individuals behind bars despite Pennsylvania’s prohibition against incarcerated felons casting ballots.
We know this because a lawsuit filed by the American Civil Rights Union (ACRU) in April against the City of Brotherly Love forced open its felon-heavy voter rolls. Before a recent Third Circuit three-judge panel, not only did the city’s attorney reject the idea of removing felons from the rolls, she said they could probably vote right there in prison if someone wheeled in a polling place.
Both the National Voter Registration Act and the Help America Vote Act require officials to remove all ineligible voters from the rolls. But hey, what’s a little federal law or two?
The ACLU’s army of ex-cons is a manifestation of the Campaign for Smart Justice, which was launched in 2010 and received a $50 million grant in 2014 from fellow convicted-felon billionaire George Soros, the bottomless trough for all things radical.
In addition to the ACLU, Mr. Soros has funded Demos, a New York-based legal group that helps liberal jurisdictions resist voter integrity lawsuits and whose board is chaired by Amelia Warren Tyagi, daughter of Sen. Elizabeth Warren, Massachusetts Democrat. Demos, as well as Project Vote, filed a brief arguing that the ACRU’s case over suppressing the felon votes in Philadelphia be dismissed.
The ACLU deployed its ex-con army to reach the alleged 11,000 card-carrying Philadelphia ACLU members with the aim of motivating them to vote for the most radical candidate. Of course, since the ACLU is tax-exempt, the literature did not tell recipients for whom to vote.
It was not hard to figure out the preferred candidate, though. As Politico noted earlier, “a surprise donation from George Soros — a staggering $1.45 million — has suddenly catapulted Larry Krasner, a defense attorney with no prosecutorial background, into the running.”
One of Mr. Krasner’s claims to fame is that he defended Black Lives Matter and Occupy Philadelphia protesters. He is a shoe-in the November election to succeed two-term incumbent D.A. Seth Williams, who was indicted in March on more than 23 federal counts of bribery and fraud. At a Krasner victory party, about a dozen celebrators chanted obscene insults about the Fraternal Order of Police, with a larger crowd later yelling, “No good cops in a racist system.”
In any case, the ACLU, according to Politico’s Ben Wofford, was “beta-testing” its election strategy using the ex-cons in Philadelphia and hoping to go national if it worked, which it appears it has. “The seven-way Democratic primary, held on Tuesday, will determine one of the most powerful prosecutors on the east coast.” Wofford wrote the day of the election. “And the ACLU’s campaign to swing it represents the first time the national office has invested in a local election.”
Campaign for Smart Justice Director Udi Ofer, who is the ACLU’s Deputy National Political Director, calls the strategy “Ten-Ten-Ten: A three-year, nationwide push for 10 new lawsuits, 10 new state laws, and victories in 10 key district attorney races,” according to Wofford.
The apparent impetus for this civic undertaking is the ACLU’s stated goal to lower the overall prison population, which they contend is disproportionately populated with black and other minority convicts, which it is, since they disproportionately commit the crimes, and usually against minority victims. But electing lefty district attorneys around the country would also go a long way toward advancing the rest of the ACLU’s radical agenda.
Campaign for Smart Justice Deputy Director Bill Cobb said the district attorneys not only decide who and what to charge with crimes but also carry political clout as lobbyists in the state legislature on criminal law. “District attorneys,” he said, “have tremendous impact at both the front end and the back end.”
Even before Tuesday’s outcome, the ACLU’s ex-con activism had already had quite an impact. Mr. Cobb boasted that all of the candidates presented themselves as champions of criminal justice reform, and, “I don’t believe we could move this field any more far left.”
Cue the chanting.
Source>http://www.washingtontimes.com/news/2017/may/21/aclu-employs-ex-cons-to-canvas-voters/

Posted by theodore miraldi at 12:25 PM